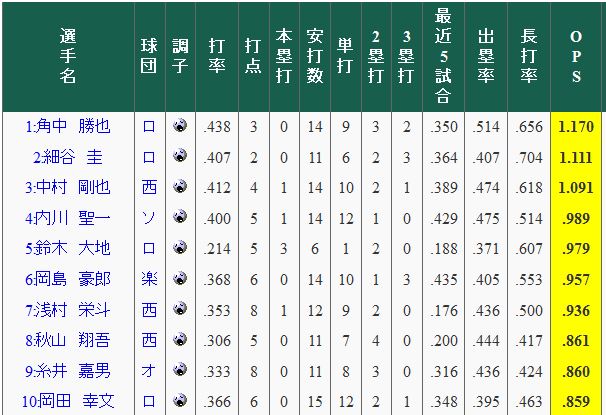 A quick perusal of Tuesday’s box scores shows a 4-4 tie in Fukuoka for Our Marines. Boring game? No – FAR from it. In my opinion this was the best game of the year, and I think a good indicator of the true character of this Chiba Lotte squad.

Daiei starter Wada’s line looks pretty gaudy – 10K in 7 IP – but 9 of those 10 K were in the first 3 2/3, and after the 5th inning this one was all Chiba. Home plate umpire Yoshikawa’s zone was a bit generous in the early going and Wada used every bit of it to outright murder the first go through the lineup – striking out the side swinging in the first, another pair in the second, third, and fourth innings, only broken up by a Despa 4-ball and an Okada single –> CS. With two outs in the fourth, Despa worked a second walk followed by Mr Do It All Kakunaka mashing a ball into the gap. Despa unwisely was sent around and was out at home by 732 feet (approx). Too bad.

Young Futaki got the call for the start one day early due to a late scratch of Ayumu (removed from the roster due to some pain from sleeping poorly) and this start was the mirror image of the first – plenty of strikes, didn’t fool anyone on the second time through the lineup, pulled early for Fujioka. Futaki really impresses me to be honest, he’s unafraid to challenge batters and he doesn’t seem to get rattled even when getting hit hard, but he’s got a ways to go before he’s going to be a consistent quality starter. His abbreviated stay on the hill resulted in 3 ER in 3.1 pitched, and after Fujioka allowed another run in the next frame1, Hawks led 4-0 after 5.

1That’s only the third run of the year allowed by the pen so far.

Perhaps 2015 was not the Golden Year that 2010 was, but the heroes of 2010 turned this game around completely. Top 6, one out, the man who struck the deciding blow in the Nippon Series that year (Okada, natch) stroked one nicely to center, and after a Hosoya (KEI!) flyout, 2010 hometown rookie Kiyota crushes a Wada offering a bit higher than he did in the 2015 CS, and plenty high to clear the fence! That cut the lead from 4 to 2, and fear of collapse rose to detectable levels in Fukuoka.

Top 8, Barrios in for Wada, one out, in comes 2010 Super Rookie and Official Favorite Player Of Yours Truly T OGINO to bat for Shogo – all he does is just about mash one over the right field fence, but instead it’s a great double and a big chance. Okada’s on a tear, can he do it again HE CAN! It’s a double to right, T OGINO in easily, 4-3 game now with the equally hot Hosoya (KEI!) at the plate – and he singles as well! Okada holds at third, still just one out – WILD PITCH BARRIOS TIE GAME TIE GAME! With the way Wada started this game did we ever expect to see this? No way. But the game was tied, and it was all up to the bullpens to decide the outcome.

Daiei’s pen is superb, and over the next four frames Lotte managed 3 baserunners, only one an inning, while the team of Safarte, Igarashi, Morifuku, and Mori struck out 6 Men of Chiba and didn’t allow a realistic scoring chance.

Chiba’s pen is about the equal of the Hawks’ in my (probably controversial) opinion. We talk about Uchi and Nishino all the time but the other guys are really solid as well. Once Fujioka left the hill after bottom 5, the Matsunaga – Uchi – Nishino – Masuda – Minami combo allowed just 2 hits and 2 walks over those last 7 innings. And when Hawks bats hit balls hard, the D was there to save the game. I mentioned T OGINO for Nakamura? Ryo Miki took over for Shogo at second and delivered a pair of masterful plays, the first a sliding grab-spin-plant-toss to snag a much needed DP in bottom 10, and the second a wonderful stretched-out snag of a hard hit Hasegawa liner.

This was a really fun, well-played game on both sides but for my money, this tie felt really like a Lotte win.

1 thought on “Sometimes a Tie is a Win”