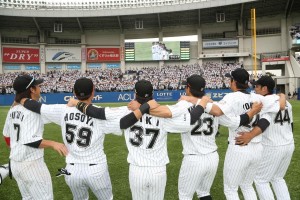 Our Marines have now faced all five of their Pacific League foes, coming out of the first stretch of the season at 8-5-1. Lotte has three series wins, one series tie, and one series loss in the first go around. That one and only series loss came at the claws of the Seibu Lions just this past weekend. Before we get to that, let’s pick up where the last GAME REPORT left off and recap starting from five games ago in Fukuoka.

Lotte led the comeback charge for the second night in a row last Wednesday night, taking the win in game 2 of the SoftBank series in Fukuoka. Kuan-Yu Chen got his first start of the year, giving up an earned run in each of the first three innings. This put Chiba in an early hole, but the bullpen prevented that hole from getting any deeper by keeping the Hawks scoreless for the remaining 6 innings.

Despite recording strikeout numbers in the double digits for the second straight game, the Marines bats made the most out the contact they did make, hitting 3 home runs on just 4 hits. Our first two runs came on a Shogo Nakamura home run, the team’s first hit of the game. Aja Inoue (current team leader with 10 RBI) hit a solo shot to left to tie the game 3-3 in the 7th. Finally, the winning blow came off the bat of Alfredo Despaingne, putting Lotte up for good a 4-3 with a 9th inning solo shot off Hawks closer Sarfate.

The offense made up for their 4 hits in the previous night, putting up 17 runs on 18 hits in the series finale victory on Thursday. Hosoya KEI drove in a team-high 5 runs on a 5-for-6 night with 2 doubles. Hosoya currently leads the Pacific League in batting average (.388), slugging (.612), and OPS (1.024). Who’s second in the PL in OPS? Good question. It’s his teammate Captain Daichi at .957.

Our Marines returned home to Chiba riding high after going undefeated in Fukuoka, but came up short the next two games at home versus Seibu. Although we had the tying run at the plate in the 9th in game 1 on Friday night, game 2 of the Seibu series was our best chance for a comeback win. Down 5-4 in the 9th, the top of the order loaded the bases with one out on an Okada (currently 3rd on the team batting .305) walk, Hosoya double, and Kiyota intentional pass. Despaigne popped out foul for out 2, and Kakunaka (currently 2nd on the team batting .327) flied out to center for the game’s final out.

Lotte did get the win in our most recent game, the Seibu series finale on Sunday. Jason Standrige earned his first win in three tries in a Chiba uniform, allowing just 2 runs over 7 innings. He’s gone 7 full innings in all 3 of his starts, allowing an average of 2ER per start. Iguchi got the start at 1B on the day, and made it count by delivering a 3-run home run in the 3rd inning, leading the Marines to a 4-2 win. Not bad for a 41 year old. The blue gloved brothers of Uchi & Nishino earned the 8th inning hold & 9th inning save preserving the win for Standridge, because that’s what they do.

1 thought on “First Time Through the Order”