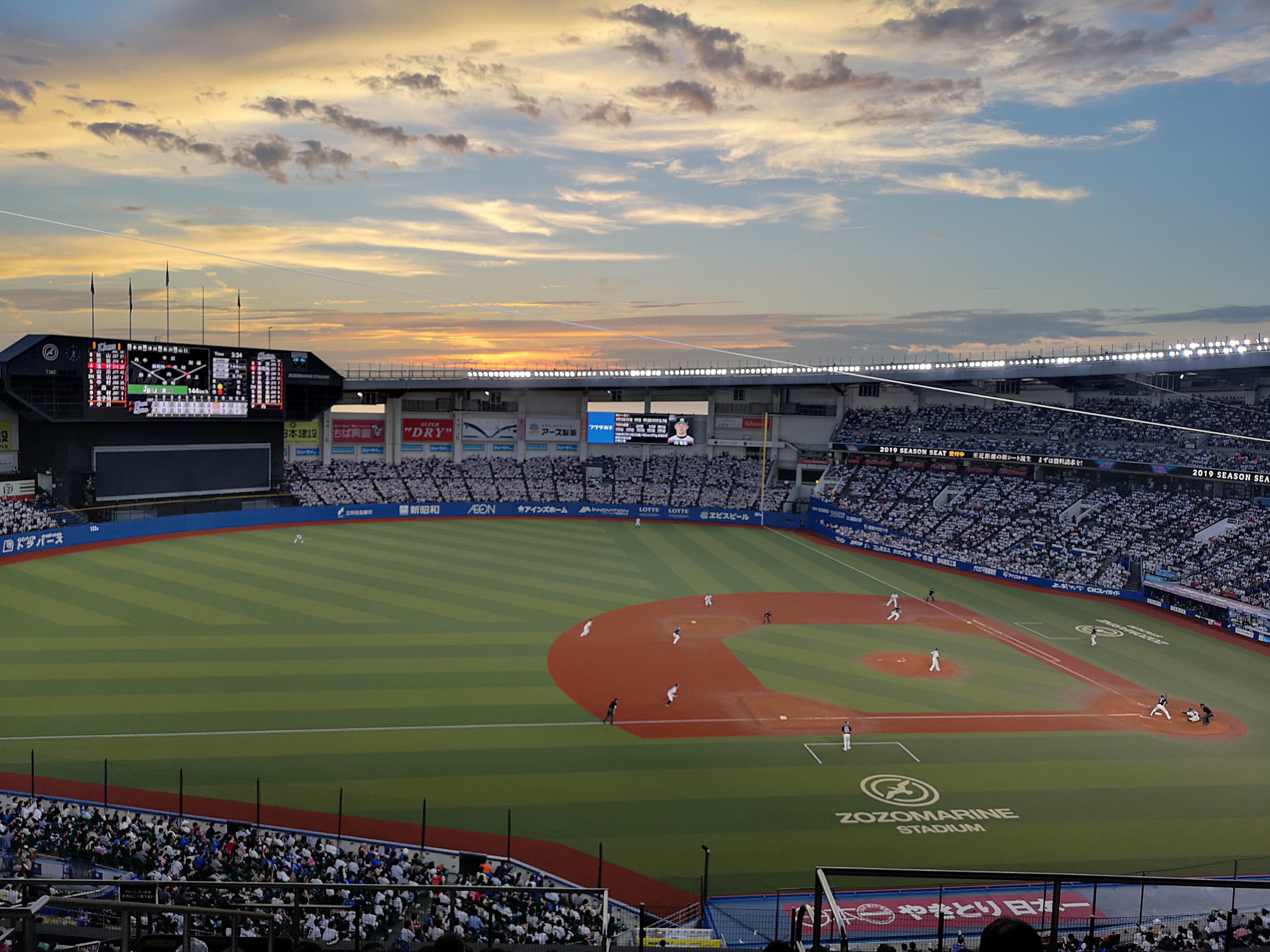 A group of us Lotte fans we call the Kamome Kyodan meet daily on Line to discuss baseball and all sorts of other things, so I’ve polled everyone to get a set of season predictions. Get it right for glory, get it wrong and you’ll get nothing but shame. I’m fully expecting to pick up the most shame for my picks – while nobody knows anything, I know less than most (^^;) Let’s see what we got from myself, Jennie, Gerome, and Craig!

I’m going to keep the Lotte portions of this light as I got a PAIR of whole-ass posts describing the team and the vast amount of changes this offseason. i do think the front office has assembled a nice group of veteran and younger talent, with the heavy lifting in the pitching staff done by the young’uns and the bulk of the contributions from the older players on the offense. I think the pitching will be quite solid, especially the pen, and several of the young starters (esp Taneichi and Iwashita) are future stars, but it’s a question of whether that rotation will hold up. I think it will.

I have far more questions with the batting order. Aja, Shogo, and Laird have been erratic at the plate to say the least, Fujioka has been a black hole at the plate and not much better in the field (and it’s quite the indictment of Taiga that he cannot unseat him). Yasuda looks like a future star but doesn’t have a position (and do you really want to DH a 20 year old?)

The outfield of Martin, T OGINO, and Shuhei Fukuda could be the best in the PL if a) Fukuda pans out like we expect and b) Ogino stays healthy all season. Kakunaka is the 4th outfielder but is clearly in decline, Kiyota is still on the roster for some reason, and Oka will probably see some spot starts to spell the other OFs. Behind the plate, Tamura is the starter but has genuine competition for that role from Kakinuma and rookie Satoh.

The best days for this roster are in the future I think, and next year they should challenge for the PL crown. This year, I think they have enough to squeeze into second.

As far as the rest of the league goes – only a fool picks against the Hawks to win it all, I think. Seibu‘s bats won’t be as good with the loss of Akiyama but they’ll still be the best in the league, though their pitching still has a long way to go. Nippon Ham is pretty clearly the last place team I think, as they have a severe lack of talent, thought that hasn’t stopped Kuriyama-kantoku from getting a lot out of them. Orix and Rakuten are pretty interchangeable, Rakuten because they have a mishmash of talent with no clear idea of where to play it, and Orix because while they have some top talent in Yamamoto and Yoshida, they have plenty of other gaps. And besides, they are Orix.

Overall, I don’t have any strong feelings about the team this year, but I will say this…I think Rakuten got the better end of all the exchanges between them and Lotte. After watching Wakui several times in the practice games, I’m convinced he’s better than Mima, based on Mima’s showing in the practice games. I paid very close attention to Wakui in several games, especially when the Eagles played against the Baystars and he shut them down, even Austin, the new power hitter. I fully admit, I didn’t watch Mima as closely as Wakui, but when I did watch, both before the corona pause and after, I wasn’t impressed with what I saw. I hope it’s just him recovering from leg issues and he gets better from here. I have a gut feeling he won’t though. I think that the acquisitions Rakuten got will be a major part of why the Eagles finish ahead of the Marines this season. This is the only thing I’m sure of re: final standings.

I think Toritani will turn out to be a good deal because his experience filling in at short is what we need. Of course, I’ll cheer for all the guys we put out in short, but I don’t think any of them are that great. This spot is a weakness defensively. I think Toritani’s better and will bring some confidence to the defense whenever he’s out there. Just as you can sense a confidence change in the defense depending on who’s standing on the mound, everyone seems more comfortable with him out there. Similarly, I’m bullish on Shuhei Fukuda, the pick-up from Softbank. He seems to fit in many different spots, and well. I think he’s just happy to get playing time, which he wasn’t getting as much of in Fukuoka of late. Plus, he hits well so I think he’ll offset some of the hitting loss with Daichi being gone. Hopefully he’ll be clutch just as Daichi was in many situations. Maybe the way forward is to rely on more player rotation at short and second between Fuj, Shogo, Toritani, Shuhei, and maybe even Taiga or Miki. If we’ve got a bunch of people, rotate them rather than get stuck in a rut. We’ve got absolutely nothing to lose, only something to gain. Same goes for Yasuda/Laird at third.

As for the foreign hitters, I love them, but I don’t see either Laird or Martin bringing anything spectacular to the season. I see them both being consistently ordinary. I don’t think they’ll perform poorly, but I wouldn’t count on either of them being a particular powerhouse. Maybe Makuhari’s sushi isn’t inspiring enough? I know Makuhari’s sushi options and have difficulty believing they’re “saiko” compared to that of Hokkaido.

As always, my love for Ogino tells me he’ll be great. I saw him get some good contact that went over the head of the infield as he did his usual liner to left field (always hits between the shortstop and 3rd). I’m hopeful that he keeps that up so the number of ground outs drops. He can run like the wind, but if it doesn’t get out of the infield, even the running god has no chance.

Finally, catchers. The kyodan knows my love of catchers and it also knows that, for some reason, I just never fell as hard for Tamu-chan as I did for my Central League guy. Good news kyodan, I think Kakinuma may be worming his way in. He’s looked solid behind the plate in the practice games regardless of whose he’s catching and doesn’t seem afraid of moving things around the zone. I expect some solid mind games from him this season.

Uniforms/Towels I’ll wear at home to show support unconditionally: Ogino, Kawakara, Futaki (there are 2 trees!), Ariyoshi (via my All for Chiba towel…I agree with Gerome’s assessment)

If this were a normal season

The offseason began with the loss of franchise player Daichi Suzuki, who had put together arguably his best campaign in 2019.  To make up for it, we signed Fukuda Shuhei and Takashi Toritani.  These were not bad signings, but probably not good enough.

We retained Leonys Martin, which was the right move.  We should get from him what we got last year.  His bat is competent enough to excuse his fielding.

I am afraid we may not see the same cost-performance from our other retained gaikokujin senshu, Brandon Laird.  Don’t get me wrong, I love me the Lairdo, but we didn’t sign him for his glove and his bat died after the all-star game last year.  He has the talent to be our MVP.  Maybe we should just suck it up and ship him some Hokkaido sushi.

Ogino will have his second season without major injury.  Aja will have a breakout season, and even if he doesn’t we will love him anyway -the big lug.

On the pitching front, Lotte’s got too much depth, not all of it good, and much of it poorly configured.

Let’s ride the sempatsu-coaster.  We still have Ishikawa who, while still having a credible claim to being our ace, is certainly on the back end of his career.

Mima was a terrible free agent signing, not because he is a bad pitcher.  It is just that, unless he turns out to have a Shohei Otani “honban ni tsuyoi” thing going on, his practice game performance seems to indicate the presence of an injury.

Speaking of injury, as of the time of writing it seems Nishino’s elbow has conspired against his promotion to starter.  This is bad news that probably means we see Iwashita getting another shot.  I am a fan, but Iwashita is not consistent.

Then we have a bunch of other young arms that require more development in Taneichi, Ono, and Futaki (young-ish?).

I like our bullpen.  Chen is great.  Even when he’s not, he’s so happy to be there that I don’t care.  We signed Jay Jackson, and that’s all right.  Please keep Masuda at closer.  He’s better than Uchi*.  That’s right, I said it.

In summary, this is not the stuff of hopelessness, but exactly not a team of destiny.  Also, for reasons that pass understanding, our big bat off the bench is still Kiyota.  So… there’s that.

This is not a normal season.

All bets are off.  I’d ignore everything I just wrote.

Oh and remember all that redundant and poorly configured pitching depth?  Get ready.  Arms are going to go down left and right due to the on-again off again nature of this season.  It’s already happening.

The Part about Ariyoshi

There’s a pitcher in 2 gun whose name rhymes with fariyoshi.

Maybe Iguchi will remember that he was basically the staff ace between June and August of 2018 and give him another look before he’s traded for prospects.

Yes, he booted his and only two first two starts last year.  That’s because his elbow was a maraca that had to be literally vacuumed out.

He pitched two perfect innings in the post-quarantine kohaku game.  He pitched better than Ishikawa in his second practice game appearance.  Stick him in the bullpen and let him work middle relief.  Or trade for prospects him to a team that’s willing to use him.

Aja has to do two things so I can die a happy man.  He must win a gold glove.  He must hit an inside the park homerun.  I decree that these things will happen this season, just in case.

*Steves’s note – don’t take this too seriously, we are just having fun here folks

Nippon Ham home games will have more energy this year, thanks to the lack of fans.

Hawks broadcasts will be watchable this year, thanks to the lack of fans.

The Metlife dome (aka the Seiburero) will remain an unbearable place to watch a game, despite the lack of fans.

The End of the Season

Assuming the Pa League’s “try not to cough on the guy sitting next to you in the dugout” policy of social distancing doesn’t prematurely end our season; I predict the following standings.

There is a caveat.  With the injuries, illnesses, twists, and turns don’t be surprised if the Buffalos somehow end up on top of this list.  Don’t jump up and call Shota Ohmine’s bookie to place that bet, at least not right now.  But don’t be surprised.  Sky!

-Craig, when asked to defend his selections in the Kamome Kyodan

1 thought on “Season Preview – We Got Predictions!”