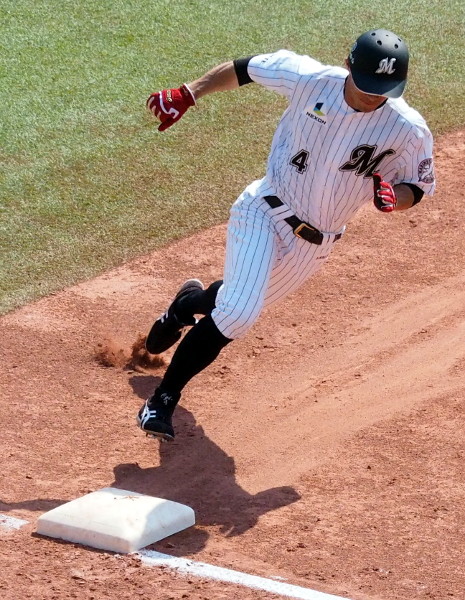 Series Preview:
A series split with Hanshin isn’t exactly convincing me to put more stock into the 2014 Marines. Putting it perspective though, it was nice to actually see Our Marines show some signs of life after the beating we took in the previous series at Yomiuri. We’re an even 8-8 in our interleague campaign, and can probably write off any dreams of catching the 12-6 CL leading Giants, or 12-6 PL leading Buffaloes. Meanwhile, the picture in the PL standings shows us four games under .500 and in fourth place.

I think I can speak for all the WLM crew by making the claim that this team has the personnel to turn this into a successful season. Cruz and Daichi have proved to be an all-round productive pair, and an improvement over last year’s middle IF. We still got the core guys of Iguchi, Imae, Saburo, Okada and Kakunaka. You can throw in dynamic players like Huffman, Ogino, & Katoh along the Braz’s power bat on top of that. The pitching hasn’t been head turning, but it’s no less reliable then the crew that took us a step away from the Japan Series last year. We made virtually no subtracts from last year, and actually added a couple of key parts. As long as we stay mostly healthy (knock on wood), I gotta believe it’s only a matter of time before this team reels off some sort of run.

By: Craig Roberts You would think by reading the line score, 8 runs to 4 on 17 hits to 5, that Our Marines cruised to an easy win on Saturday afternoon. This was not the case though. Lotte was actually behind as late as the 6th inning when they scored the tying run, and didn't score the go ahead runs until the 8th. In the end, five Marines produced mutli-hit games led by Imae's 5-5 day (4 singles, a triple, 1R, 1RBI) en route to victory in front of a sold out QVC Marine Field.

The Carp had a hit in each of the first two innings, but it was Our Marines who struck first for a run. Imae led off the bottom of the 2nd with an infield hit to short for Lotte’s first of 17 hits. Imae advanced to second on a wild pitch and then made his way to 3rd on a Kakunaka ground out. The next batter Saburo walked on a ball in the dirt, which got past the catcher Shirahama in the event, allowing Imae to score from third. Just like that, it’s 1-0 Marines.

Our Marines scored again in the 3rd inning. Ogino led off with a ground ball base hit up the middle, and was advanced to 2nd on a Daichi sac bunt. Iguchi knocked Ogino home on a base hit to left to make it 2-0 Marines. Imae and Kakunaka followed with hits to load the bases, but Saburo (strike out) Cruz (RF fly out) came up empty to leave the bases loaded.

Lotte scored a run in the 4th as well to make it 3 straight innings with 1 run scored. Ogino stroked a 2 out double to center to get aboard. Captain Daichi followed with a line drive single to left to bring Ogino home. 3-0 Marines. Iguchi was hit by the first pitch he saw, putting two runners on. Next up, Imae hit a ground ball through the right side of the infield and into right. Unfortunately, Daichi was gunned down at the plate on a nice Amaya throw to end the inning.

Ohtani looked decent again in his third start of the year. He held the Carp to 0 runs on 3 hits through 5, but the sixth inning is where things came apart. A one out single, walk, and single scored the Carp’s first run and after 67 pitches, Ohtani was pulled from the game with the score 3-1 Marines. Itoh went with Matsunaga, who doesn’t always do spectacularly when inheriting runners. So what happens? The number 3 batter Maru takes a 2-1 pitch over the right field wall for a 3 run home run. One swing of the bat, and it’s 4-3 Carp. The Carp fans go crazy. You have to remember, at this point Lotte had outhit the Carp 11-5 with once less turn at bat. Little did we know, this would be the last Hiroshima hit of the day.

Lotte did manage to regain a share of the lead in the bottom of the 6th with starter Osera out of the game. Iguchi got on base again with a 2 out walk. Imae was up next and sent an opposite field shot over the right fielder’s head. The ball one hops the wall, as Iguchi comes in to score and Imae slides in safely with a triple. We’re tied 4-4! The score remained tied after Matsuda threw 1-2-3 7th, and Furuya a scoreless 8th.

Finally Our Marines blew it open in the bottom of the 8th, with all four runs being charged to Carp reliever Nakata, who had sported a 0.86 ERA in 31 1/3 innings going into today. Okada was in to PH in the pitcher’s spot, and quickly worked the count to 3-0. Nakata ran it up to 3-2 before Okada smacked a liner into a center for a leadoff single. Ogino sacrificed Okada to second, setting up Captain Daichi with the go ahead run in scoring position. And what does our captain do? Crack! Deep fly off the wall in the right-center field. Ogino scores, Daichi into 3rd. 5-4 Lotte. But wait, there’s more. Iguchi one hops a ball in front of the right fielder. Daichi scores. 6-4 Lotte. Imae’s turn is next, and ho-hum, just his fifth hit of the day to center. Nakata is pulled from the game, and Hisamoto is in to face Kakunaka. Kakunaka lines a ball off the leaping short stop’s glove. Imae is forced out at second and Hosoya (PR for Iguchi) goes to third. Next it’s time for the good stuff, with Huff-n-Hustle Chad Huffman into pinch hit. Huff takes a 2-1 pitch the opposite way and hits the wall in about the same spot as Daichi did earlier. Hosoya scores, Kakunaka scores. A Huffman 2 RBI double makes it 8-4 Lotte! A 1-2-3 9th for Nishino and this one is all over. Lotte wins. The second place Carp lose 9 striaght. More importantly, Lotte wins.

*** The marines.co.jp camera crew caught some great photos today. Usually, I try to use the best photo in the blog. Perhaps inspired by the sell out crowd, they captured an especially lovely collection of photos today. Check the gallery out here on Lotte’s Facebook page.

By Steve Novosel In what was sort of the mirror image of Saturday's win, Lotte came back from an early deficit to take a healthy lead, only for the bullpen to implode allowing Hiroshima to storm back in shocking fashion to win the last home game of interleague. As they say, sometimes you're the windshield, sometimes you're the bug.

I’m going to let the immensely valuable Pacific League Movie handle the highlights for this. Take a look:

OK, are you back? Great. Some thoughts:

The Good
– The offense has been clicking quite well as of late. Daichi and Kakunaka especially – these two have been streaking back up the PL batting charts and seemingly striking a big blow every night. Whatever malaise that had crept into the hitters lately looks like it might have dissipated.

The Dodgy
– The defense in this game was, well, not at all good. There was only one “official” error in the third inning but honestly it should have been over so much earlier as two other plays were basic miscues by the infield. We do love Nemoto at WLM, but he was especially shaky this one.

-Yes, WLM favorite BRAZ delivered a nice pinch hit RBI in bottom 4, but why is Ishikawa being pulled after the 4th inning? He yielded 2 runs, one as a result of the aforementioned sloppy D that in my mind should not have been an earned run. On a better played day, one could see him having perhaps 2 walks, 3 hits and one run through 4 – quite decent. Even with all the extra batters in the third he was only sitting on 69 pitches, and the deficit was only 2-0 at that time so while a run would be nice it wasn’t essential at that point. I say he should have been left in the game, less wear on the pen, more experience for the rookie.

The Ugly
– Obviously the grand slam given up by Masuda would be in here, but you knew that. The problem is that’s two out of the last three outings that were very bad for Naoya. In 20 appearances he’s given up 6 runs total for a perfectly acceptable 2.57 ERA, but those two bad innings push his season ERA above 5. I hope someone doesn’t get a wild idea to give him time in ni-gun as has happened with so many other quality players who hit a rough spot lately.

– Speaking of which, in the pursuit of Doing Something the team management seems to be rearranging the team daily like a jigsaw puzzle. Naruse is left to rot in ni-gun (where he threw 11 Ks in an outing this weekend), our best defensive lineup seems to see the field inconsistently. I realize there is some platooning going on and Nemoto tends to play with righties on the mound, but Cruz hits not much worse off righties than Nemoto, and in fact 5 of his 6 HR on the season are off RHP. The Cruz-Daichi middle is by FAR the best combo up the middle – why not let them play every game?

I’m no baseball strategist but it seems quite obvious to me that on a team without Kyojin-like depth such as Our Marines the winning strategy most days is going to be to put the best available players on the field and give them the opportunity to succeed. Hopefully management starts seeing things this way before this season is a wash.