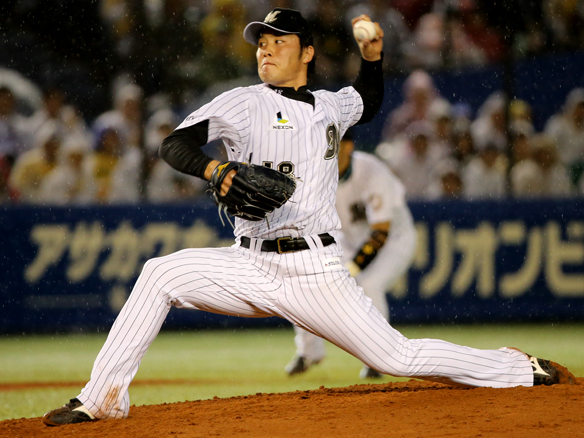 This month has been a disaster so far in Lotteland. The pitching has been pretty suspect at times, and when the pitching is not suspect the bats have mostly remained silent. Chiba has lost 7 of the last 9, it is time for the talent we all know is here to start showing what they can do. No need for dominance, competence will do just fine.

After the abbreviated 2 game road trip, it’s back to QVC for Lotte and a rematch with Hanshin. The hot Fujioka and the mercurial Wakui should be the starters – but I’m not worried about the starters. I want to see runs, and I want to see them come in bunches.

By Steve Novosel Young lefty Fujioka has been piping hot as of late, and on this very wet Wednesday at QVC Fujioka fired what is arguably the best pitching performance of his career as the bats capitalized on all sorts of opportunities to crank out a lovely 8-3 win.

I say “arguably” the best pitching performance of his career – Fujioka did have a 10 K, 1-run complete game in his third career appearance – but that’s the only start of his career that can hold a candle to what he did in the steady rain on Wednesday. I’ll spoil any suspense for ya – how do you like:

I like it A LOT. Fujioka is such a pleasure to watch when he’s in a rhythm, too – spinning off his right foot, throwing arm still raised when he makes a great pitch, and that 1000 watt smile when he makes something good happen. We saw this in abundance on Wednesday.

Pretty quietly, Fujioka has turned himself into one of the best pitchers in NPB this year. “REALLY, Steve? Come on now, don’t be a homer.” No, really, I’m not being a homer here. A strong argument could be made for Fujioka as the PL pitcher of the month in May (it went to Kishi), and if you remove his one poor outing of the year (8 ER in 4.1 at Seibu back in early April) his ERA is a stellar 1.36. This month it’s 0.64.

Fujioka also knows the frustration of poor run support, as his last start was a loss in what we now term “The Yamaguchi game” – the 1-0 shutout at home vs DeNA. With hot-and-even-younger phenom Fujinami on the bump for Hanshin, the risk was there that Fujioka could yet again get little support.

No. Not this time. Our Marines managed 8 runs off just 7 hits (with 4 BB and a HBP playing major contributing roles). That’s a far cry from the “one run on 10 hits” nonsense we’ve seen a lot of lately. How it went down was pretty simple.

Kakunaka doubled with one out, and with two outs Hanshin 1B Gomez booted a sure out off the bat of Nemoto – Kakunaka in easily, and Lotte led early 1-0.

With one out, Okada and Daichi both singled (with both stealing bases in the inning as well). After an Iguchi K, Saburo walked to load the sacks for Kakunaka. This time, no double from Kakunaka, but he came from the depths of an 0-2 count, fouled off a pair of pitches before taking a ball of his leg to push in the second run of the game. Bases still loaded with Gori coming up – and he doubled to the left center gap. A pair of runs in, 4-0 Lotte!

Fujinami left after 5, Tsutsui in. Tsutsui, well, he was not good at all in this frame. A leadoff single by Huffman followed by a pair of outs to Okada and Daichi (sac bunt and sac fly – Huff to 3rd) – then the walk parade began. First Iguchi, then Saburo (both on 3-2 counts) to load the bases – and yet another walk on a 3-2 count to Kakunaka, 5-0 Chiba. Gori up again – he gapped a 1-0 fastball to right this time, and he goes all the way to third. Three Men of Lotte in, it’s an 8-0 laugher. What a welcome sight!

Masuda took over for Fujioka in the 8th and got pretty well hammered, which is where those three Hanshin runs came from. But after the Gori triple, this one was not in doubt, but just for good measure Nishino nailed the victory down with a perfect 9 pitch 9th inning.

By Steve Novosel Given my ranting and raving reputation, you'd think a game where the pitching blew an early 3-run lead and in the late innings a 2-run lead would leave me fuming. But this one? No, not really. I'm upset about this loss for sure, but the way Our Marines played this game should be admired, not criticized.

Chiba jumped on Hanshin starter Iwasaki right from the get go. A T OGINO triple plus 4 straight hits from Iguchi, Imae, Kakunaka, and Huffman gave Our Marines a first inning 3-0 lead. If the starter were Wednesday’s Fujioka, I’d be ready to kick back with a nice beverage and enjoy the relaxing win, but no, the starter was Wakui.

I’ve been sitting a bit on the fence about Wakui this year – his stats are by no means good, and his ERA is the third worst among PL qualifiers, but certainly earlier in the year I thought his pitching was on average better than what his stats showed. Now, I am not so sure, as at times Wakui looks rather lost out there. This start was another prime example of this – 2 great, perfect innings followed by a gradual and inexorable deterioration. It started in the 4th inning as a single, a walk, and a timely hit by Takahiro Arai led to the first Hanshin run of the game, but still a 3-1 Lotte lead.

In the 5th, things got much, much worse. A Fujii leadoff single ended up in a run as Uemoto drove him in with a double, and after a walk to Ogata Wakui tossed a pretty fat pitch to the very dangerous Gomez, who bombed it to deep center for a no-doubt 3 run jack. The early 3 run lead was all gone, and the Tigers led 5-3.

Notice how I haven’t mentioned any Lotte scoring? That’s because innings 2-5 followed the recent formula of “plenty of baserunners, few runs”. Despite 6 baserunners on 4 hits and a pair of walks in that time, Lotte could not plate anyone, and after the side went down in order in the 6th, well, I must admit the mood was not good.

Where the game started to turn was in top 7. Furuya came in for Wakui and struggled more than a little bit – a single, an error by Furuya on a sac bunt attempt, and a HBP loaded the bases for Murton. He drove a ball into the left center gap, but Huff-n-Hustle tracked it down and laid out for a spectacular diving catch to end the inning.

That wonderful play, I think, turned the mood of the game completely. Ando came in for the Hanshin in the 7th, and right away the Chiba bats got to work. Iguchi singled, Imae doubled down the right field line, and with no outs the scorching hot Kakunaka stepped in and belted a 2-run, game tying double! Still no outs – for some reason Itoh decided to PH for Huff with Okada, who simply sac bunted (preview: this seemingly minor substitution probably was the key play of the game in retrospect). Cochito Cruz in – he crushes a low liner that Murton doesn’t even try to get to – it’s over the fence for a 2-run, come from behind dinger! Superb batting for Cruz, and a bit of revenge as his recent injury came against Hanshin.

All the bullpen has got to do is hold the lead – and of course the bullpen has been the strength of Our Marines for years. But this night, oh no. The normally reliable Carlos Rosa, lowest ERA on the team, was not good at all. A pair of no out singles started things for Hanshin, but a quick pop to first by Fujii and a strikeout of PH Sekimoto made it look like Chiba would escape. But after a walk to Uemoto to load the bases, Itoh went to the pen and brought in Matsunaga to face the lefty Ogata. Naturally, Wada-kantoku also went to his bench and brought in the much better hitting, much more experienced Ryota Arai (a righty). Matsunaga’s first pitch is driven by Arai – it dove into shallow center by Okada made a good break on it, dove, got it in his glove, and dropped it. Just dropped it. That’s 3 runs right there, the two run lead gone, 8-7 Hanshin.

You know from the score listed above that that’s how it ended. Lotte did have a chance in the 9th thanks to a Kakunaka leadoff single but there were no more miracles in store, and the Tigers walked off the field victorious.

I mentioned up front that Chiba should be proud of how they played, and indeed they should be. The Okada substitution and missed hero catch was clearly the key to the game, and we need to ask ourselves what should be the correct moves be for this situation? One, should the hot hitting, strong defense Huffman stay in to swing away in a tie game? The sac bunt was meaningless in retrospect as it was negated by the subsequent Cruz homer, but if Huff stayed in and gotten on base (very possible given badly Ando was pitching and how well Huff was playing) the HR would have been a 3 run homer. I understand setting up the sac fly, but I have to wonder if it’s not preferable to just let the players play in that situation.

In the 8th – the Okada non-catch really needs to be discussed a bit further. 2 outs and the bases loaded with a 2 run lead – if you play that ball off the turf 2 runs would score (most likely, but not certainly) but definitely all three would not score. Instead Okada tried to make a hero play, and it says so much about Okada’s skill that everyone fully expected him to come up with that ball. Can we criticize that choice? I suppose, but for me I love the attempt to end the inning with no runs. I really like when the players’ first thoughts are to get to that ball and use their athletic ability to make a play. To me it shows extreme confidence in one’s abilities and even though not diving for it might have been a less risky play (especially in retrospect) I think Okada should be praised for what he tried to do. He’ll make that catch at least 9 times out of 10, I feel.