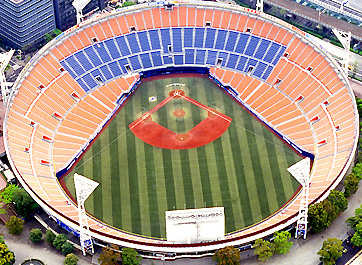 At least the offense has woken up – we can definitely say that about recent efforts as Lotte hitters have managed to get on base frequently and even score a few as of late. The bullpen is starting to worry – a lot – as many previously reliable arms have run into surprising difficulties. Just the same as last year, we at WLM are worried about bullpen overuse. Sure, part of that is the at times quite poor starting pitching, but really it’s a matter of Itoh-kantoku making a conscious choice to trust his pen for way more innings than is probably prudent.

Suffice it to say, this series in Yokohama is tough to predict. One might think a warming up Chiba offense could give Yokohama arms fits, but it didn’t play out that way two weeks ago at QVC. The starting pitching is full of intrigue as Yuta Ohmine makes a surprise start in Game 2, with New New Lefty Ace Fujioka in Game 2.

As I harped on quite a bit last year, I was the last man riding the Yuta Ohmine bandwagon after everyone else had (wisely) jumped off several years before. I figured, hey, a 25 year old former first round pick with great stuff still but piles of mental toughness issues could make for a fine reclamation project, right? And for a while last year I looked brilliant as Yuta was fantastic in ni-gun and in his first ichi-gun game threw a wonderful complete game victory.

After that – a reversion to old habits, and a demotion back to ni-gun. This year has been no better as Ohmine has been stuck in ni-gun and quite frankly not very good there (ERA near 5, 1.41 WHIP). But since Karakawa and Naruse have been exiled, arms are needed and here is Ohmine’s I lost count chance. Here’s the kicker – Yuta was really good this game. No, seriously!

First Half Pitching Duel
Ohmine’s counterpart on the mound brings a nostalgic smile to my face – former Lotte rookie of the year Kubo, member of the 2005 Nippon Series champs and former teammate of Ohmine when he was just a wee lad.

Kubo was in full control the first 5 innings, as Chiba could manage just 4 hits and no runs in that time while Kubo punched out 6 in those early frames.

Ohmine was just about as good – 4 hits and 4 Ks in the first 6 innings – except for one big mistake, a fat pitch to the light hitting Ide in bottom 5, a pitch that Ide knocked into the right field stand for a 2-0 DeNA lead. Old Ohmine would fall apart after such a mistake but he was just grand for the 6th inning and could have gone very deep before the impatient Itoh pulled him in the 7th. Final line, a very reasonable 6 1/3, 4 hits, 2 ER on just 83 pitches. He’ll get more chances for sure.

Second Half Crazy Ball
Top 6 – Captain Daichi smacks a one-out double to right. After a first-pitch Iguchi ground out, Imae drew a walk to bring hot Kakunaka to the plate. And hot Kakunaka continues the hot hitting with a hot double to left, scoring a hotly streaking Daichi for the first Lotte run. Braz in with a chance to add on – and yeah, he does! Sort of! Kubo uncorks a ball in the dirt, catcher Kurobane can’t get it, Imae races home to tie the game – WAIT, Kurobane misses with the throw to Kubo at home, Kakunaka scores as well! It’s not quite the three-run wild pitch of yore, but it’s the very rare 2-run wild pitch and a 3-2 Lotte lead.

Top 7 – T OGINO reaches via one out single, and after almost getting picked off he barely, barely steals second whence Iguchi drives him the heck in. 4-2 Lotte, and Itoh says “That’s enough, boys!” and eases off the throttle, pulling Iguchi (for Hosoya), Braz (for Saburo), and Huffman (for Okada). This did not work at all.

Bottom 8 – Carlos Rosa in and quickly it’s two outs, but on out three he and Imae are confused over who should field a short bouncer, and ultimately neither got to it. Kajitani pinch hit – RBI double, hoo boy. That’s it for Rosa, in comes Furuya, who immediately gives up the game tying hit to Ishikawa. Zoiks. Furuya continued to be out of sorts as well, walking a pair of batters to load the bases for Tamura. Itoh went to Ueno to get this vital out, and oh did he! A punch out, further damage prevented, a tie game going to the 9th.

Top 9 – Cruz and Daichi singled (with a sac bunt in between) for runners on the corners with just one out. BIG chance time – time for no, he got pulled for no reason, remember? It’s Hosoya, and Itoh pulls Kei for Nemo. Nemoto chops a Sosa offering right up the third base line. Kanazawa (pinch running for Cruz) was on his way home and surely out, but new 3B Gourriel fumbled the glove-hand transfer and just tossed the ball in the air! Everyone safe, 5-4 Lotte lead! And after Imae lashed a liner deep, Daichi scored for the 6th run.

All that was left was for Nishino to do what Nishino does, and he done did that thing in 1-2-3 fashion. A nice bit of work to fight back from the early deficit and the disappointment of the DeNA comeback.

By Steve Novosel You may take a look at that score and think that this game was somewhat enjoyable. After all, a lot of runs scored can make for an interesting game, right? Not in this case. I've seen half of the 63 games played so far in person and most of the others on TV, and to me this was the least enjoyable of the lot. Yuk.

Part of that stems from the disappointment of a bad outing by New New Lefty Ace Fujioka – only his second bad start of the year. Part of it comes from the fact that none of the other pitchers had any more success, either. But most of it comes from the fact that our best players were not beat by and large by the best DeNA had to offer, but by role players and guys on the back side of their careers. The whole episode just left a very sour taste in this Lotte fan’s mouth, and judging by the reaction on Twitter during the game, I am not the only one.

I should have guessed we were in for a long haul in the first inning as leadoff T OGINO double and subsequent Daichi single led to exactly zero runs. How? Ogino tagged on a foul fly out (the second out) and was easily thrown out at the plate. Honestly, I don’t know how unless the jump was really poor, but replays never showed the tag at third. Shocking.

In the second and sixth innings – a pair of crucial double plays killed Chiba rallies. Sure, Our Marines plated 6 in the game but it could – and should – have been so much more.

Scoring only 6 wasn’t the problem, though. The real problem was Fujioka, then Kimura, then Hattori just could not get outs. I mentioned in Fujioka’s last start – the best of his career, as I said at the time – that he exuded a confident mien that we just hadn’t seen in recent times. This game, I haven’t seen him so flustered all year. First inning, a double by Gourriel and a homer by former Seibu utility man Goto gave DeNA a 2-0 lead. Second inning – 4 more DeNA hits and the score was 4-0. 3rd inning – Fujioka lost Tamura from an 0-2 count to a walk, and the next batter Ide hit ANOTHER homer – second in two days – for the 5th and 6th runs. Fujioka was so flustered at this point in the game that he balked not once but twice with Tamura on. I’ve never seen that from him.

For a moment it looked like it would be game on as Chiba put four consecutive baserunners on in the third punctuated by RBI doubles from Ogino (his third multi-hit game in the last 5) and Daichi (Daichi – 3 modasho in 3 games, 13-27 in his last 6 games) for three runs, but that was basically it for the offense threat until the game was way, way out of hand. Yes, there were 5 hits total in innings 4-6 for Chiba to get the pot warming up, but Ino and Yokohama never let the pot boil over.

On the other hand, Yokohama’s pot boiled over and made a huge mess on the scoreboard. For the 4th inning Kimura took over for Fujioka, and Kanazawa for Yoshida, but nothing changed. 4th inning – 4 hits for 3 runs and a 9-3 DeNA lead. 6th inning – bases loaded walk to make it 10-3. 7th inning – Goto RBI double (4-5 with 4 RBI on the evening. Goto! Really!) and an 11-3 score.

The Chiba bats tried to make it a bit more interesting in the 8th as a Kanazawa double and Ishimine single scored 3 runs, but that only narrowed the gap to 5 runs.

I realize that Itoh-kantoku blamed Yoshida for Fujioka’s troubles since both were pulled at the same time, but Kanazawa wasn’t the answer either. I have to wonder why Emura was not inserted in the 4th with the game only a three run deficit and Itoh determined to pull Yoshida. All season the catchers with the lowest pitcher ERA have been Yoshida and Emura so it seems logical that if one is not being played, the other should be.

One game win, one game lose – this is the recent fate of the 2014 Chiba Lotte Marines. How will this cycle be snapped? Perhaps this weekend in Nagoya Dome?