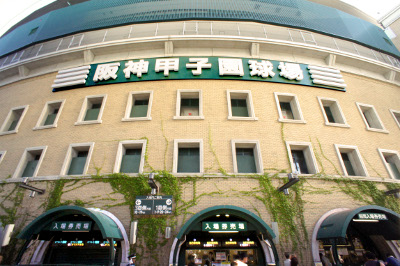 The start of interleague could not be any better for Our Marines. The 4 game sweep of Yakult and Kyojin means Chiba has won 5 in a row. The pitching last series was great, and the bats have kept up the efficient production. Can everyone keep it up as the team hits the road?

I’ve made a conscious decision not to attend these games despite really enjoying Koshien. It’s because every time I head to Hyogo, we lose. So let’s see if staying away helps they guys win. Hey, we all gotta make sacrifices! I’m sure the rest of the Lotte family will show up in huge numbers as always, roaring like a jet engine.

By Steve Novosel 4-0 in interleague, 5 game winning streak? Slap another W on the pile, as Lotte rode the great start by Fujioka and the hot hitting of Saburo, Cruz, and T OGINO to a lovely 5-2 victory. It seems my decision to watch from home was a good one.

I can’t say enough good about Fujioka’s start. Sure, his command was not always precise – that’s one of his weaknesses, normally – but his stuff was pretty spectacular. All day Hanshin hitters had little idea if a ball would break into the zone or stay well out of it. There was a stretch in the second inning where Fujioka caught Gomez and Murton looking on the same high curve in consecutive at bats. In fact, if Itoh had not kept Fujioka in for 125 pitches an attempt to let him go the distance, we’d be talking about the 7 innings of shutout ball that our hopefully future ace tossed.

The day started on a dodgy note for Our Marines, as Daichi singled with one out in the first, but was thrown out as the second part of a strike-em-out, throw-em-out DP. A 1-2-3 inning for the Chiba bats followed in the second, but fortunately Fujioka sent down the first 6 Tigers hitters in order, so a 0-0 game after 2.

Top 3 – Kakunaka drew a leadoff walk from Hanshin starter Iwata, and Katoh sac’ed him to third. Emura (starting at catcher for the third game in a row) hit a grounder to Ryota Arai at third, but Ryota muffed it – Emura and Kakunaka safe on the corners. That brought up Kansai native T OGINO – and he smacks a double to left to plate Kakunaka and open the scoring at 1-0 Lotte. The guys weren’t done, though – a two-out walk by Iguchi brought DH Saburo to the plate – he singles to right center. Emura in, OGINO in, 3-0 Chiba after 3!

The very next inning, Lotte had yet another big chance as Imae led off with a single and Kakunaka followed with a double – runners on second and third, no outs for Katoh. He smashes a tough ball right in the dirt at Ryota, but he manages to get a glove on it this time and fire home to nail Imae. Inning still on, though – but Emura grounds into a rally killing double play.

Fujioka got himself in a huge mess in the bottom of the 4th, as a walk and a pair of singles loaded the sacks with just one out. Ryota blooped a ball to shallow left center, but Cruz makes a stunningly good play on the ball to glove it for out two, and Tsuruoka popped to Daichi to end the threat.

Let’s go to the 7th. Iwata’s still in, but not for long as a pair of singles by Ogino (2-5 with an RBI and 2 runs scored) and Iguchi led to Iwata being swapped for Tsuru.

Saburo was up next and cranked a deep fly to center. Hauled in by Yamato, but plenty deep to bring in Ogino and run the score to 4-0 Chiba. Cruz was bating in the 5th spot – he belts a liner just past the outstretched glove of Murton1 in left, Hosoya (PR for Iguchi) in easily, Cruz standing up at third! That 3-0 lead turned into a 5-0 Lotte advantage.

1Of course Chono wins the WLM Least Favorite CL player award, but Murton’s a close second. So it is with great joy that I mention that a reasonably good fielder would likely have caught that ball. Murton just isn’t that guy, though.

Given the quality of the Chiba pen, that should have been more than enough support, and indeed it was. Fujioka got credited with 2 earnies in the 8th after being given the green light to pitch on into the 8th, despite sitting on 113 pitches. A quick walk and a double convinced Itoh to go to Rosa, who allowed both inherited runners to score and make it a 5-2 game. Really not much doubt at this point, though, as Nishino shut the door on the game with a 12 pitch perfect 9th frame.

That’s 6 in a row for the Men of Lotte – can they make it 7 on Monday night? If the weather holds – a big if – it’s Wakui vs Fujinami.

By Steve Novosel The 6 game winning streak and perfect interleague record - over. It was bound to happen sooner or later. The minds of Lotte fans are not on this single game today, though, but on the health of Luis Cruz, who took a pitch off his wrist late in the game. Let's hope he's OK.

Unfortunately for Our Marines, there’s not a whole lot to talk about in this game anyway. Wakui got start and had a typically Wakui start – generally quite good, generally good enough to win, but loser for the 6th time this year due to one poor inning. That inning was the 4th, when a walk, RBI double by Gomez, single, and Fukudome sac fly led to a pair of runs and all this game’s scoring. Take out that inning, Wakui’s outing is 7 innings of 4 hit, no run ball (plus 6 Ks and a pair of walks) – excellent start. Even with that inning it’s a quality start.

Wakui ended being the only Chiba pitcher, going the entire 8 innings on 121 pitches.

Super second year pitcher Fujinami threw for Hanshin, and I’m quite sure he found little stressful in his outing as he induced Chiba batters to hit into a variety of groundouts and fly balls all night, never really getting much of a chance going.

As I mentioned up front, the real news from this game involves Luis Cruz, who took a pitch off the wrist that Fujinami missed with quite badly. Cruz went down immediately in obvious pain, and he was unable to even make it to first base. Preliminary reports is that there is a suspected fracture at or near his wrist, though it still needs to be confirmed with a follow-up examination at the hospital on Wednesday.

We’ve become big fans of Luis, both for his skills at the plate and in the field, and I think losing him for any extended time will be a tough blow. Let’s hope it’s not as bad as it seems.