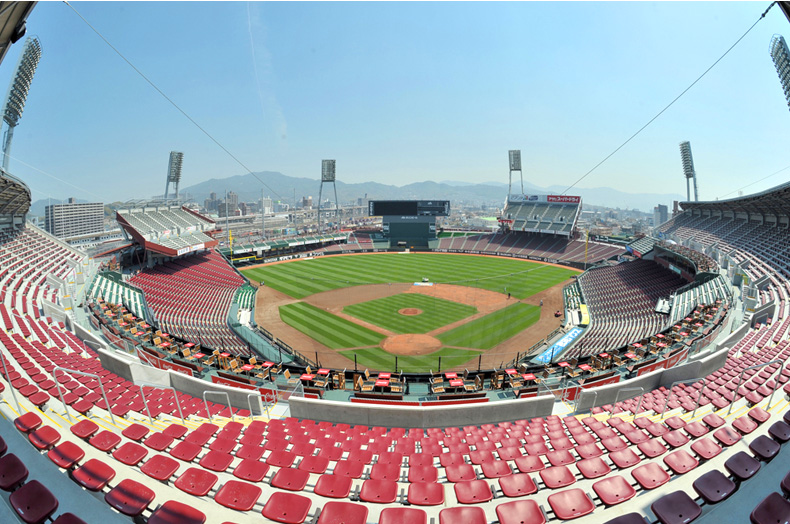 As nice as the start was for the Hanshin series, I can’t help but have a bad feeling in my mouth from Tuesday’s game, a miserable loss that injured our SS Luis Cruz. Fortunately the news late Wednesday is that the injury to Cruz’s wrist is not a fracture, so we can expect to see him back in 10 days or so.

The focus shifts to Hiroshima and the first game with the CL leading (!) Carp this year. Interleague has not been so good to Hiroshima as they dropped the first four road games before picking up a pair of wins over Seibu (yay!) this past weekend. Games with Hiroshima tend to be interesting affairs, both on the field and in the stands as the fans battle for cheer supremacy.

By Steve Novosel Our Marines were able to overcome a sloppy, miserable start to game 1 vs Hiroshima at Zoom-Zoom Stadium with a stunning display of power in the 8th inning. The pen held on in a quite precarious situation (or three) to nail down a 6-5 victory. Let's see what happened.

Early Inning Malaise
Tack on the end of the second Giants game to yesterday’s shutout and you get 11 innings in a row without a run for Our Marines. And let me tell you this – early on in this one it seemed that Chiba wasn’t going to push anything across versus Carp rookie starter Kuri. There was a solid chance in the first as T OGINO and Iguchi worked walks off Kuri but an inning ending GIDP by Saburo squelched the chance.

Other than that, hits by Imae in the second and 4th constituted the entire Lotte offense in the first 4 innings – 15 innings in a row without a run. Eeeeeek.

On the other hand, Hiroshima had little trouble taking advantage of sloppy Chiba D and some rather poorly located pitches from New Lefty Ace Furuya. Carp leadoff hitter Soyogi reached on an Iguchi error and was soon driven in by the ultra-hot Maru (who absolutely could not be prevented from getting on base). 1-0 Carp after 1.

Despite more sloppiness (including a throwing error on Yoshida, trying to nail Maru at second) Furuya held on to that 1-0 deficit until the 4th, where everything went pear-shaped. Leadoff batter Rosario – huge homer to deep left. Third batter Kila Ka’aihue – huge blast to right. And after a walk to Hirose and a sac bunt, Soyogi triple to left (poorly played by Ogino, but it didn’t matter as Hirose would have scored regardless). 4-0 Hiroshima after 4, and just like that Furuya and Yoshida are pulled from the game.

Chipping Away
Our long national nightmare ended in the 5th as Lotte finally pushed a run across, though it was a bit unfulfilling. Kanazawa (in for Yoshida) smoked a one out double, and Katoh singled him to third. T Ogino grounded to third to force Katoh at second, but Kanazawa would score to make it 4-1 Carp.

Kimura picked up where Furuya left off, allowing a pair of singles in the 5th but being saved by a nice double play and a spectacular leaping grab by Flying Nemo at second. A relatively uneventful 6th for both teams kept the score at the same 4-1.

Where It All Turned Around
Despite the go ahead hits happening in the 8th (ooh, Steve, you’re getting ahead of yourself!), for my money the key inning in this game was the 7th. The top of the frame looked like simply more futility for Our Marines – a pair of no-out hits by Kakunaka and Kanazawa resulted in a single run via another T OGINO ground out to third, but nothing more. And perhaps it was, but a 4-2 score in the late innings looks a whole lot better than 4-1.

No, the key to the game lies not in that single run in the top of the inning but the super escape in the bottom. Here’s the scene: Ueno in for Kimura, and he is not sharp. Kikuchi reaches on an infield single (actually a great play by Daichi, Kikuchi is just fast) and a single by Maru and a walk to Eldred load the bases with no outs. None. Rosario (of the big home run to left in the 4th inning Rosarios) steps in, and watches a 2-2 pitch just nibble the outside edge for out one. Itoh went to the pen for (gulp!) Matsunaga. But Matsunaga, he was simply awesome – a shallow fly by Kimura (to shallow for a sac fly) and a swinging punch-out to Kila – escape. The game could have completely blown up at that point, but instead, the 2 run deficit is maintained.

Top 8 – Nagakawa in for Hiroshima. After a Saburo K, Imae blasts a shot to deeep center… but caught for out two. Nemoto steps in, and he blasts a shot to deeeeep center – nobody’s catching that one, a solo shot and the 2 run deficit is down to just one. Kakunaka singles, and Kanazawa works a fantastic 9-pitch AB ending in a walk – 2 on for Katoh Shohei NO it’s Braz! After a pair of low balls, Nagakawa serves a lovely meatball with extra sauce, right down the middle – BYE BYE! 3 run tater by Braz, the comeback is complete! 6-4 LOTTE.

All that’s left is for Nishino to close it, and he did, yes, he did, but it was very shaky indeed with a run allowed on a pair of hits. It all ended with our young closer getting Kila swinging on a 3-2 forkball out of the zone – a 6-5 Lotte win!

By Steve Novosel Another game in Hiroshima, another early 4-0 deficit, only this time there was no climbing out of the deep hole with Carp ace Maeda on the hill. Our Marines drop the second game of the series by a 5-3 margin.

With Kenta Maeda pitching – in the discussion for the best pitcher in Japan – it’s not typically a good idea to get behind early, but that’s exactly what happened as in the bottom of the first Lotte ace Naruse left a changeup where Carp slugger Brad Eldred could get some wood on it. With two fish on the sacks, the resulting dinger made it a super early 3-0 Carp lead.

And in the second inning, light-hitting veteran Ishihara followed in Eldred’s footsteps with a high jack to deep left field – no longer 3-0, nope, it’s 4-0 Hiroshima.

You might wonder to yourself, “Self, but I thought Naruse was keeping the ball in the park much better this year except for that aberration in Sapporo a few weeks ago? Wasn’t that just a poor match between pitcher and catcher, perhaps?” Yes, self, Naruse has done a much better job avoiding homers this year, with only one given up with Satozaki, Emura, or Yoshida at catcher. But today Kanazawa started, the same Kanazawa who also started the Sapporo game, and who has been perched behind home for 8 of Naruse’s 9 homers on the year. In only 16 2/3 innings, I might add. Now I don’t know the relationship between pitcher and catcher and how much influence the man catching has on his pitcher’s performance, but something just ain’t right with that pairing.

ANYWAY as we learned yesterday, being down 4-0 isn’t necessarily the end of the world. Today though, yeah, it kinda was as basically only the bottom of the order was productive at the plate. In the 5th inning, back-to-back singles by Daichi, Kanazawa, and Katoh brought in a run with just one out, but Maeda got Braz swinging on a nasty slider, and Kakunaka struck out looking on a very well placed pitch. 4-1 Hiroshima lead.

Nope, make that a 5-1 Hiroshima lead as Eldred belted another Naruse offering out of the park to lead off the bottom of the fifth. And with that, Naruse’s night was done – 4 2/3 innings of 5 run, 8 hit, 4 walk ball. Hmmph.

The good news is that much-maligned Ueno pitched the rest of the way, and he looked damn good. That is, if you consider 3 1/3 innings of 1 hit, no run ball (on 34 pitches) any good. And I do.

The bats needed to get hot – in the 8th inning they did, as Iguchi smashed a two-out double, then was pinch run for by Hosoya. “Cleanup hitter” Saburo up next, he singled to shallow left but for some inexplicable reason Hosoya is sent home even though there is no chance he beats any sort of throw. And of course he does not – out at the plate, easily. With Imae on deck, does sending Hosoya make any sense? I think we can all agree with a “no” vote.

9th inning, last chance. Ichioka in for Maeda – Imae greets him with a single (had he had the chance to bat in the last inning… never mind). Ichioka gets Nemoto and Daichi quickly for outs one and two, but Kanazawa lines a double to center. Imae in, the gap narrowed to three runs. Katoh in the box – he’s doubling as well! Kanazawa in, 5-3 Carp lead. It’s all up to Chad Huffman, but he strikes out swinging. Sigh…

Our Marines are still in first place in the interleague standings, though, and head back to QVC for a weekend set with DeNA followed by a visit from old rival Chunichi. Can we get another 4-0 homestand?