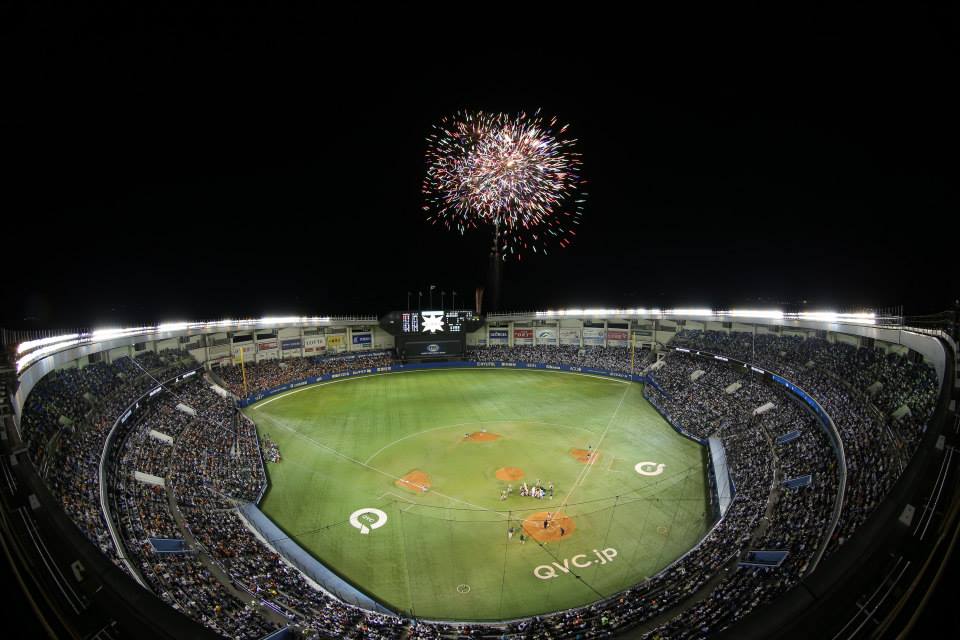 Interleague play started well for us and hopefully that continues against the Giants. We’re 2-0 against Tokyo teams and have a chance to make it 4-0 on Friday and Saturday. We’re riding a three game winning streak, and it seems that MAYBE things are starting to come together for Our Marines. Perhaps the everyday lineup is beginning to take shape. With the recent heroics of Ogino and Katoh, we may actually be on a path to achieving the balance of old and new that we hoped for at the beginning of the year. Cautious optimism abound.

Naruse is slated to start game 1 against a winless Utsumi. Naruse’s last start was not good. 9 earnies in the first two innings. Possibly the low point of the season. Let’s hope it is. As we transition to the 2 game set interleague format, we may start to see some changes to the rest of the rotation this weekend.

By: Craig Roberts You might not have guessed by looking at the final score, but tonight’s game was a fairly close contest with both starting pitchers keeping it tight for most of the game. In fact, the Giants led for a third of the game, the game was tied for another third, with Our Marines only leading for just the final three innings. Chiba tied it at one in the 6th. We took a one run lead in the 7th, and blew it open with a 5 run 8th.

The Giants struck first on a two out Chono RBI double in the 3rd. Things got a little scary when the next batter Kataoka sent a ball deep toward the gap in right center. Ishimine, running over from right field, made a nice leaping catch with his back to the infield to end the inning and keep the Giants run total at one. The Giants had another chance with runners on 2nd and 3rd and no out in the 5th. With the infield in, Naruse got Matsumoto to ground out to 2nd for the first out. The pitcher Utsumi popped out in foul ground left of 3rd for out two. The leadoff man Chono then grounded out to Cruz to end the inning. Nice escape by Naruse. Naruse’s check swing strike out of Lopez to end the 6th with a runner on third is worth mentioning as well.

Meanwhile, Our Marines produced just three base runners for the first five innings. The bats even went down 1-2-3 by way of the K in the 5th. Imae got the lone hit for Our Marines in the 2nd. He and Cruz started a chance in the 4th after Cruz reached via an E6* and an Imae HPB with two out. A Katoh ground out to 2nd ended the inning though.

*It was a rather comical play, with the LF Cepeda falling on his ass after the error let the ball past two Yomiuri infielders. Cruz, with some heads up baserunning, slid safely into second.

That all changed in the 6th though thanks to T. Ogino. Ogino led off the inning with high fly ball to deep left. The ball just cleared the wall and landed in the seats to tie it at 1. Three straight one out singles loaded the bases, but Shohei Katoh popped out to 3rd, and pinch hitter Craig Brazell just got under a pitch for a fly out to right to end the threat. Our Marines broke the tie in the very next inning though. With Emura on second thanks to a leadoff walk, Captain Daichi came up with two outs. Daichi lined a ball to right. Chono, on a beeline toward center tried in vain to make a play on it. The hard hit ball flew past Chono, forcing him to change course toward the right field fence. As the ball skipped to the wall, Daichi made it all the way to third for an RBI standup triple! 2-1 Lotte, with the triple ending the winless Utsumi’s night!

Masuda came in to the pitch the 8th and sent the top of the Giants lineup down 1-2-3, embarrassing Chono once again in the process on a swinging third strike WAY out of the zone. That’s when the fun started. Our Marines led off the bottom of the inning with back-to-back home runs to left by Cruz and Imae to bring the lead to 4-1! All smiles from the Lotte dugout, but we weren’t satisfied yet. A one out walk to Okada, and single by Emura that bounced in front of and off Chono* put two runners on. After a Kakunaka PH force out put runners on the corners, Ogino hit a bloop single to left to knock in Okada to make it 5-1. Captain Daichi followed with a 2-run single up the middle to bring it to 7-1 scoring Kakunaka from 3rd and Ogino from 2nd!

*If it seems like I’m picking on Chono, well it’s because I am. It’s kind of a passion of ours here at WLM. While we’re at it, this was the second time he awkwardly allowed a one hopper to bounce off of him in right.

Carlos Rosa got around a lead off single and double, and two out walk to finish off the Giants in the 9th. Lotte wins! Naruse, Cruz, Daichi, and Imae are all named the heroes. I’m told it was a festive night at the stadium, and a great way to start the weekend.

By: Craig Roberts Ayumu Ishikawa held Yomiuri scoreless for 7 innings to lead Our Marines to their fourth win in four interleague games. Kakunaka got Lotte's first hit, a 3 run triple that broke a scoreless tie in the 4th inning. The triple put us up for good, with three more runs coming before the Giants finally got on the board in the late innings.

It looked like we were on our way to a pitchers’ duel Saturday afternoon, with Sugano sending the Chiba bats down in order the first time through. We got our first base runner when lead off man Okada reached via a Kataoka error at second to start the 4th. In that instant, Sugano lost his dominating stuff. After a Daichi sacrifice and Iguchi pop out, he walked the next two batters Cruz and Imae. Kakunaka was up with the big two out chance, and he delivered. He sent a high fly ball over Cepeda’s head and into the strong QVC wind, landing on the left center warning track. All three runners score on the triple for a 3-0 Lotte lead!

We scored again in the fifth on a looooong Daichi RBI single. The ball just missed being a home run to right, hitting off the top of the fence. Emura scored from third to make it 4-0. The 1 out chance was set up by an Emura double and Ishikawa fake-bunt infield bloop single.

Our Marines added 2 more runs in the 7th inning. Okada and Ishimine both drew no out walks, and Iguchi brought them home with a 1-out double down the left field line to bring the score to 6-0.

Six runs was more than enough with Ishikawa on the mound. Only one Yomiuri Giant reached second base for Ishikawa’s seven innings, when Kataoka was sacrificed over from first. He didn’t stay on base much longer, as Kataoka was thrown out by Emura trying to steal 3rd for the second out of the inning. The Giants did score a run a piece in the 8th and 9th off of Ohtani and Masuda respectively, on a Yokogawa solo shot and Cepeda RBI single. Our hot bats and Ishikawa’s strong start made those runs pretty much meaningless though. Ishikawa’s line: 7IP, 94P, 4H, 3K, 0BB, 0R.