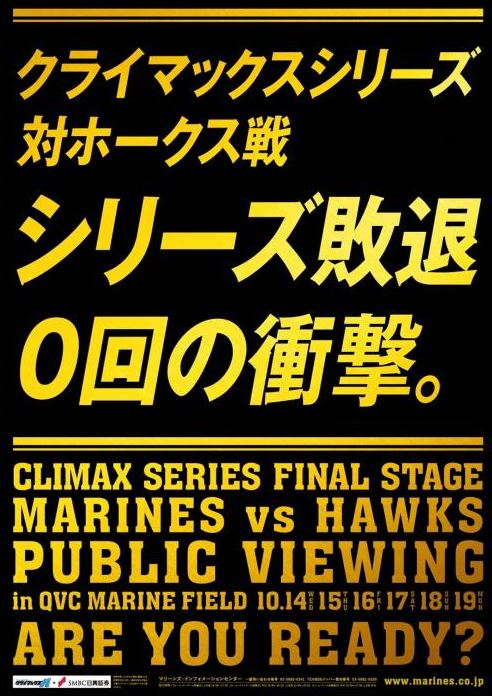 Our Marines have reached the end of the season: Thursday’s 6-1 loss at Fukuoka means that if Chiba is to play on we must win 4 in a row.

But, not so easy. Remember back to 2010 and this team was in a similarly precarious position. Down 3-1, needing to win out to advance, having far from the best starters available for the first two games (Shunsuke and Yuta, actually), the guys took those first two close games before Naruse shut down the Hawks to advance.

In some ways what faces Lotte is a bit simpler – yes, it’s 4 in a row instead of 3 in a row, but the next three starting pitchers are sure to be Ishikawa, Chen, and Wakui. That’s really good! All bats are available. The small visitor section is still mighty in voice, easily louder than the rest of the stadium combined. We can do this!

Here’s a brief note on how we got here.

The hangover after Wednesday’s heartbreaker seemed to not extend into Thursday’s game 2 – at first. Ishmine led off with a single and Kakunaka doubled him to third, but neither Kiyota nor Despa could bring either home, and after Iguchi walked to load the bases with two out Cruz grounded out to end the chance.

Actually, it’s not totally it, Tamura plated Daichi in the 4th with a single (one of two hits for him on the evening), but THAT was it. Only 16 batters to the plate in the last 5 innings, only one reaching (via walk). This after racking up 100 pitches on starter van den Hurk in the first 4 innings. It was one of the worst batting performances of the year, honestly – swinging at first pitches, no patience, out out out out out. Painful to watch.

Why? Well it was clear the bats were demoralized by a rather unlucky 6th inning, I think. Daiei had the early lead thanks to a Ho-homerun, but otherwise Furuya looked great, I thought. Forward to two outs in the 6th, Imamiya singles and Yanagita moves him to third on an infield hit that while tough, Daichi probably should have made a better play on. Here we go. From there, hit after hit after hit, 5 runs in. Horrible.

It’s a bad way to wrap up the game, and recovery will be difficult. It’s time to see the strong hearts of LOTTE – we need to see their absolute best on display tonight.