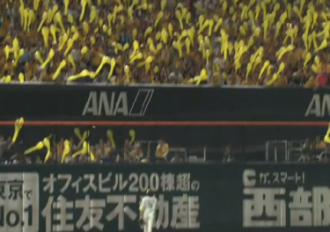 Every baseball season has it’s share of “if only” moments. If only that one ball didn’t take that awkward bounce. If only we could have turned just one LOB into an RBI. If only the outfield fence was just a few centimeters shorter. Unfortunately for Our Marines, it felt like Game 1 alone could have fulfilled a season’s quota of those moments. It wouldn’t be out of character for Our Marines to rally from here and bury the Hawks. It may also turn out that we think of Wednesday night as the night the Golden Year mojo ran out.

The Hawks looked very beatable in Game 1, putting Our Marines in position to erase the automatic one-game deficit and to turn the series into a best-of-5 affair. Lotte struck first with a 2-run double by Kiyota in the 3rd. SoftBank tied it up in the home half on a Yanagita 2-run home run. After that, the Marines bullpen held the Fukuoka bats to just one hit in innings 4-9. All Lotte had to do was push one more run across the remainder of the game to take the victory. We had plenty of chances to do just that, leaving nine men on base and going 0-for-10 with RISP excluding the Kiyota double.

By far the most devastating chance was a failed 5th inning rally. The top of the lineup did their jobs setting up the chance, but the heart of the order failed to convert with runners on 2nd and 3rd & no outs, and the bases loaded with just one out. All it would have taken was a sac fly or well placed ground out, but we couldn’t get the contact we needed on a sharp grounder to 3rd from Kiyota, and subsequent strikeouts from Despa & Cruz.

Another near miss came in the 7th when Kiyota smashed a ball to right field. The ball originally appeared to fly over the fence for a go-ahead home run, before deflecting off the back wall and back onto the field. Replay showed it was all an illusion, the ball had in fact hit off the top of the fence instead. When the umpires returned to the field they rightfully kept Kiyota just where he was on second base.

All the missed chances finally caught up to us, allowing the Hawks to get the break they needed to take the win. As mentioned earlier, the Lotte bullpen had put the Hawks bats to sleep after relieving starter Ohmine to start the 4th inning. Fujioka went 2 strong innings, Masuda and Matsunaga combined for 2 1/3 hitless innings, and set up man Ohtani returned to his regular season form going 1 2/3 without allowing a hit. Uchi looked poised to carry the mantle in the 10th, striking out the first batter he saw on a filthy splitter. The splitter was so filthy though, the ball deflected off Tamura’s glove and toward the backstop. The PH Uebayashi took first base on the strike out, bringing up the top of the dangerous Hawks lineup with the leadoff man on. Eventually this led to a Uchikawa sayonara single that gave the Hawks the 3-2 win. Thanks to the automatic one-game advantage, Our Marines must now win four of the next five.

1 thought on “CS Final Stage Game 1: The One That Got Away”