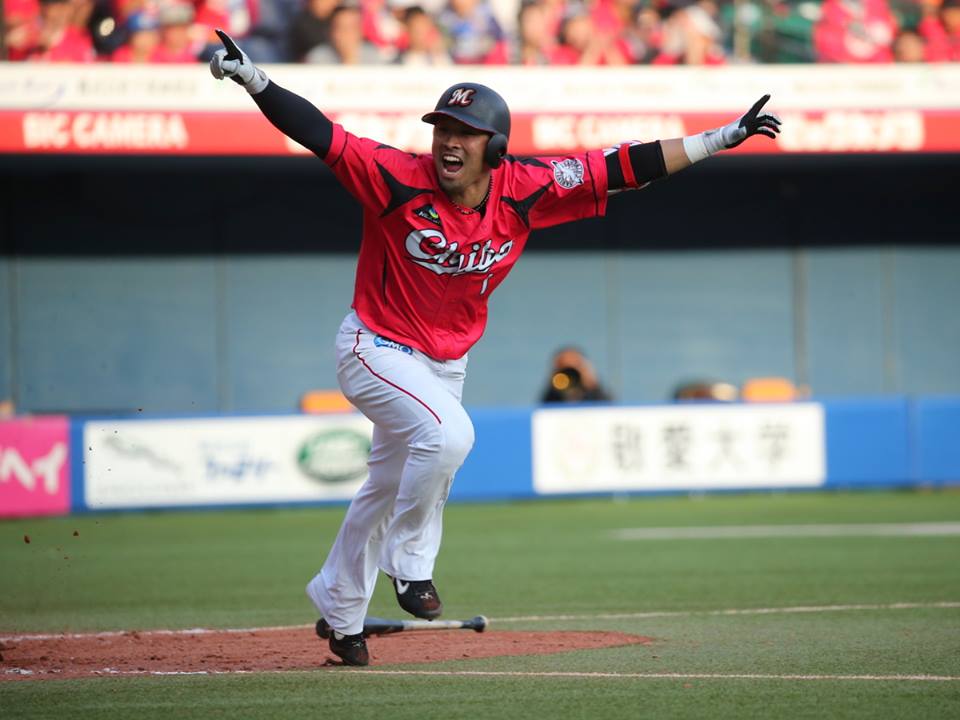 The 2016 version of Our Marines is nothing if not an exciting bunch.  As I mentioned in the last post, this week started out pretty terribly before turning into something wonderful, and the exact same thing could be said of the recently concluded 3-game home set with the Buffs.  Let’s take a deeper look.

Orix pitching has been a horror show all year, with a team ERA pushing 5, a bullpen with a total inability to get outs, and most surprisingly the worst starters in the PL, including the triple threat of Dickson, Nishi, and Kaneko.  Kaneko is still Kaneko, though, and though he hasn’t been quite the same since his surgery last season, I would be shocked if that run of poor form lasted too long.

With that said, Kaneko got the start on a rainy Friday at the Q vs The Return of the Baby-Faced Killer, back from deepest Urawa to augment the back end of the rotation.  Quite honestly I (along with many others) was surprised to see still-young Karakawa, as last year he was rather objectively terrible all season, with only 3 QS in 12 ichi-gun starts (6.32 ERA on the season) and threw one terrible outing at ni-gun this year among a few really nice starts.  Still there he was on the hill, and the results were…  dare I say, good?  Yes, good.

In fact, better than any start he made last year – 7 IP, 5 H, 1 BB, 6 K and 2 earnies on just 88 pitches.  One could make the argument that he SHOULD have stayed in the game on such a low pitch count as three runs were to score in the 8th due to some silly sloppiness (all Fujioka-based).  The main problem with this one, though, wasn’t Karakawa, but lots of hard-hit Lotte balls right at Orix defenders.  Kaneko was by no means unhittable, but when those hits are drilled at Adachi, or brought in by a diving T Okada, not much can be done.  In the end, a 5-0 Orix win.  Sad.

The second All for Chiba game of the year, and more importantly the third free uniform day of the year = certain sellout.  And sold out it was, except for the always sparsely attended Orix gaiya.  For a refreshing change1, the crushing mass of red-clad Lotte Fans were gifted a thrilling game that wasn’t decided until the very last pitch, a sayonara single off the bat of slumping local hero Kiyota.

1In the last couple of years, it always seems that these sorts of games end up true stinkers in front of a full house.  Witness last week’s Marine Festa, or the Tanaka-career-implosion Marine Festa last season, or basically any other Marine Festa.

Chiba starter Jason Standridge has been far from slumping all season, though the great pitching has not been reflected in his record, which entered (and left) the game at 2-3 despite leading the PL in ERA.  Jason really deserved a win in this one, too, as both runs yielded were unearned (due to an error at first by Iguchi), but the run support was just not there.  That is, until the late innings.

Bottom 7, 2-0 Buffs lead.  Starter Matsuba has been pulled for Yoshida.  Kaku-chan blasts a double to the fence to get things started, and Koyano plays an amusing game of fumbleroonie with an Iguchi grounder to put runners on first and second.  Tamura’s bunting, and he drops the PERFECT bunt down the 3B line, all runners safe.  Yoshida’s feeling the pressure, he uncorks a wild pitch to the backstop.  After a delay, Kaku breaks for home, the call is OUT.  Noooooo…. but there’s a protest, and a review, and it turns out Kakunaka actually went AROUND the tag, SAAAAAAFE.  See it from Twitter user @sisterice :

Hosoya (PR for Iguchi) scores on a ground out by Shogo, and we’re tied going to the 8th.

No, it’s 3-2 Orix after 8 thanks to a T-Okada single, sac bunt, and Nakajima RBI double that would have been a routine out had the OF been playing at normal depth.

Bottom 8, Kiyota at the plate, mired in a slump that has seen his batting average drop 50 points in 2 weeks, recipient of scattered boos after an earlier GIDP – KIYOTA, SMASHER of BOMBS! He launches a huge shot into deep right field!  An impossibly huge homer at the perfect moment, tie game!2

2The crowd roar at that time was one of the loudest I have ever heard at a regular season QVC game.  It was actually surpassed a minute later when Despa blasted a pitch right after that just died at the track in CF.

Masuda tosses a lovely 9th to keep the game tied.  Okada bats for Katoh in bottom 9 and works a walk off embattled sort-of closer Hirano.  Shogo drops a sac bunt, Hirano fires poorly to second, saaaafe.  Daichi bunts as well, this one moving runners to second and third and bringing back Kiyo to the plate.  He pokes at a 1-0 offering from Hirano and squeaks it into center, SAYONARA!

Kiyota was the hero of course, and he really choked up on stage as he gave thanks to the coaches for continuing to believe in him, letting him bat in the heart of the order despite his recent woes.  Lovely to see him break out in such a big way.

Could the rubber match live up to the awesomeness that was Game 2?  No.  But it was still pretty damn cool.  Embattled Lotte starter Yuta Ohmine was terrible yet again – better than last Sunday but only just so, getting pulled after 2 ineffective innings, 3 earned runs.  Worse, he only topped out at 142 km/h (87 mph) which leads me to think he’s hiding an injury.

His departure left an onerous task for the pen, hold on for at least 7 innings to give the bats a chance.  The Minami-Fujioka-Masuda-Matsunaga-Nishino combo gave up 9 hits, 3 walks, only struck out two Buffs…  but no runs.  I’d call that good pitching.

Normally great Orix starter Nishi has been Among the Disappointing as I mentioned in the intro, and in bottom 2 one could see why – a pair of walks and a hit by Kakunaka loaded the bases with no out, while a Nemo goro and Tamura squeeze brought two men in to cut the lead to 3-2.  After that, though, Nishi was really solid.  So solid, and the Orix pen so poor, that skipper Fukura kept him in way too long and…

Let’s just skip to the 8th.  Nishi still in, though he’s well into triple digit pitches.  Shogo and Despa draw walks, and with two gone Kakunaka rips his league-leading 4th triple of the year, barely missing a homer!  Shogo and Despa in easily, Nishi pulled but it’s way too late, 4-3 Lotte lead.

The always-reliable-until-the-past-two-weeks-or-so Nishino in to close – he allowed a pair of baserunners and a deep foul bomb by Itoi, but to my eyes pitched with more confidence than he has in many games.  You know he closed it out, you know Our Marines took the series, and the week that began so terribly ended on a pretty good note.

Up next is a 3-game set vs PL leaders Daiei.  Chiba and the Hawks are clearly the class of the PL so far, Ayumu-Futaki-Wakui set to start, so the series should be a thriller.

1 thought on “Coming Back Strong”