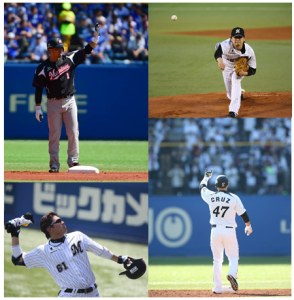 Rainy season got you down? Well, it’s been twelve games since we last posted. So how about another We Love Marines News Update to cheer you up!?!? I can’t think of better way to boost morale than to celebrate our four All Star Marines. Yes, four members of our Lotte Marines have been selected to represent the Pacific League in the 2015 All Star Series: Ikuhiro Kiyota, Hideaki Wakui, Katsuya Kakunaka, and Luis Cruz. Before we get into that though, let’s do a quick update on the state of Lotteland.

I know I promised to lift your spirits. If you’re anything like me though, the endless gray and dull of rainy season makes you a bit moody. A bit up and down. Well, apparently it has the same effect on Our Marines. We rang in the return to the regularly scheduled PL calendar by dropping three straight at home to Rakuten (bad). Then we followed by winning five of our next six (good), only to go winless in a three game set at Seibu Dome (bad).

This streakiness is not just a short-term phenomenon, it’s become the modus operandi of the 2015 Marines. We start a few games below .500, reel off some wins to get within striking distance of A-class status in the standings…only fall right back down with another losing streak. Rinse. Wash. Repeat. It’s been even more pronounced in our last 23 games: LLLLLWLWWWWLLLWLWWWWTLL

Ok, as promised, let’s devote the rest of this post to our Chiba Marine All Stars. Kiyota was our only non-manager selection, securing his first All Star appearance as a players choice. Wakui was a manager selection, thanks to a strong start to the year. On the eve of the Star Festival Tanabata, our remaining star tanaバッター are Kakunaka & Cruz.