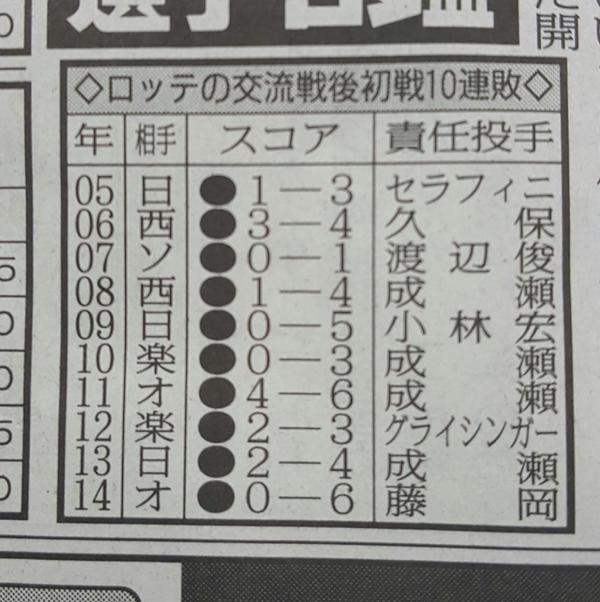 This is the 7th year I’ve been doing this blog, and I just learned something that is both odd and deeply stupid.

Look at that image on the right – that’s the results for Lotte for the first game after interleague play since it began in 2005. And yep, Our Marines have dropped every single game in this span including a rather poor 6-0 loss last year. This year gives us The Baby-Faced Killer, fresh off a nice outing vs Gomiuri last week, and strangely enough not on that list of losing pitchers.

Nope, that 10-game streak is now an 11-game streak as Karakawa goes 6+ of 2-run ball, all runs on a Fujita double in the 3rd, but loses 2-1 as Our Marines’ Bats can only squeak out a measly run off 13 base runners. That’s just baseball, there’s tons of games like that every year (though given the pitching this year, not so many), and this streak is just a dumb statistical oddity, not an indicator of anything meaningful and certainly not a jinx.

But still, 11 losses in a row to restart PL play is a pretty strange coincidence, right?

2 thoughts on “The Jinx Stinks!”