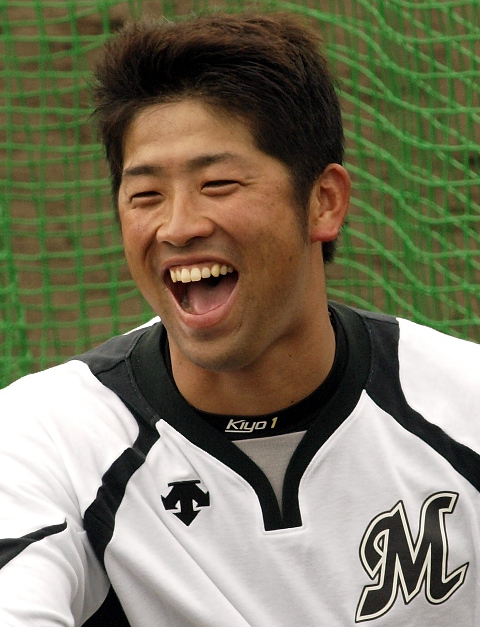 We’ve long been fans of Ikuhiro Kiyota ’round this site, and I’ve been a strong advocate for putting him in the starting lineup and letting him get comfortable, seeing what he can do with extended playing time. What’s not to like about Kiyota?

He joined the team via the draft after the 2009 season, and in his rookie season of 2010 Kiyota proved a key player in the run to the Nippon Series title, providing the decisive blow in game 3. His 6 RBIs in the series were the most ever for a rookie, and was awarded the excellence award for his contributions to the title.

Based on raw talent, one could argue that he’s a 5 tool guy. It’s indisputable that he is a superior defensive player, can play all three outfield positions, and to my eyes has the strongest arm on the team (it’s not a close competition, either). After 2010, though, he hasn’t really emerged as a force during the games, always playing solid D of course, but with the competition presented by guys like Kakunaka he hasn’t always been able to get consistent playing time.

That looked to change last year, as Kiyota earned a spot in the opening day starting lineup, smashed 4 homers, a pair of doubles and a triple in 47 at bats (for a career high .826 OPS) before being exiled to Urawa for the remainder of the season. Clearly Kantoku did not like the .170 BA but to my eyes the walks, defense, and the emergent power threat more than made him a viable candidate for staying at ichi-gun. And indeed, Kiyota flourished in Urawa, posting a .990 OPS with 12 HR and 8 SBs as the Urawa Marines took the ni-gun championship.

Ni-gun. Why was a guy who could post those numbers at ni-gun and post respectable numbers at ichi-gun stuck in Urawa all year? A total mystery.

This month Kiyota has finally gotten the chance to start regularly and boy, has he shined. You’ve seen the video of his 21 hits in 7 games. He’s still on a 13 game hitting streak as of this writing, posting a full season slash line of .354/.404/.615, and in May has posted a incredible .388/.485/.718 line. He’s now just 5 ABs away from qualifying for the batting title, since he is batting first in the lineup he should be qualified no later than this weekend. As of now, Kiyo is second in BA behind Daiei’s Yuki Yanagita.

Actually, Yanagita is a perfect comparison for Kiyota’s season. Let’s look at the tale of the tape:

That’s… pretty close. Kiyo is behind on counting stats of course, but he’s had 30% fewer ABs. Don’t forget Yanagita is an established star, a starter on Samurai Japan. I have no idea if Kiyota can keep up the sort of production he’s managed so far this season but my, it has been exciting to watch.

2 thoughts on “On Kiyota”