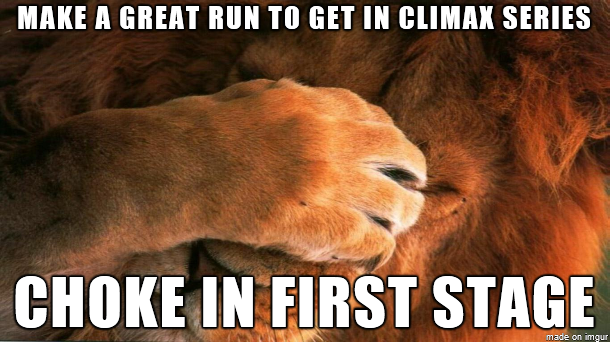 If you came to this site looking for balanced, level-headed coverage of Our Marines and their trip through the NPB post season – well friend, you came to the wrong site. I have a standard that I apply to fan blogs, especially my own: If you’re not biased in your coverage, you don’t love your team enough. And this is We LOVE Marines – so clearly we love Our Marines, it says so in the title. Seibu coverage can be found at I Enjoy Lions (Even Though Being A Seibu Fan Is Not As Much Fun As Being A Lotte Fan, But Whatever).com.

As Chiba prepares to roll into Tokorozawa and beat those Lions – again – I think it’s important to take a brief look at the position matchups between the two teams, to see how they stack up. How else can we know who will in? Other than knowing who is obviously going to win, that is?

Let's first take a look at the infielder matchups.

Maybe you’re one of those weird people who wants to look at “stats” to know “who’s better” but I don’t like to do that. No sir. Asamura had an OK year I guess – no Triple Crown winner for sure, just a .317 BA / 27 HR / 110 RBI season. ONE season. What was he doing last time we met in the Climax Series? That’s right, nothing.

Iguchi is a Proven Winnertm and a hero to millions. He’s stolen both bases and hearts. Plus we call him “Tad” or “The Gooch”. Anyway, he’s obviously the superior player – advantage, Lotte.

Strangely enough, I don’t even need to make an extremely dodgy justification for this one. Nemoto’s had a solid year, and the move to second has suited him well. He still strikes out too much and sure we’d like him to get on base more, but he gives solid defense and some power at the top of the lineup.

There was a time when Kataoka was one of the rising young stars but it seems to be in the past now due to injury, though he’s still got a great glove. This one goes to Lotte, though.

I’ll be honest here – I watch a ton of PL ball and I had no idea who Onizaki even was before this year, despite him being 30 and having been on Seibu for 3 years. He’s been starting the last bit of the season so I assume he’s starting in CS.

Our second year player/first year All-Star Daichi has tapered off a wee bit offensively later in the year, though he’s been better in basically every category over last year. He’s played every game, tied the team record for triples, had his first HR (and at Seibu Dome) and first grand slam (vs Seibu). He’s gonna be huge.

I honestly like German, not only is he wonderfully named Esteban but he’s fun to watch. He’s matching up with GORI though, so come on.

Even if you write off Imae’s hot hitting late in the season as a fluke – and he did finish second in the race for the batting title – the man’s crushed it in past Octobers, and that’s including key hits vs Seibu. I’ve seen nothing this year to indicate he’ll be any different this time around.

And in the outfield...

This one’s a bit of a wild card as I have no idea who will start for Lotte. It should be T OGINO but he’s out. Could be Saburo (probably) and could be Kakunaka (though he’s probably in right) or Ishimine. Who knows with Itoh-kantoku.

Kuriyama is the Lions captain and the beating heart of their team. All of our guys are cooler, though. I hate the Lions. You know which way I’m going on this one.

Akiyama is a veritable human highlight reel. He makes all sorts of acrobatic, diving catches. What a fun guy to watch.

Okada is more funner, though – a vacuum cleaner for anything in his area. Plus he’s got the most memorable moment from the most memorable game I’ve ever been at. Offense? He’s no power hitter for sure but he can get on base, and when he’s on he’s very dangerous. Of course he gets my vote.

A rare moment of snark-free commentary from yours truly.

It would be hard to argue that Sakata is better than Kiyota or Kakunaka. Maybe he is, maybe he isn’t – he’s only played in 50-ish games this year, and while he played well, it’s not much to go on. We know what we are getting from Kakunaka and Kiyota, though. I’ll take those two any day.

The men behind the plate - the key to success?

Again, 100% snark free. Satozaki is getting old, but he’s produced for years at the plate, in the playoffs, at Seibu Dome. He’s the best defensive catcher we have and is at least as good at handling pitchers as Ginjiro.

No question Satozaki is the better choice. (NOTE: this answer could be different if Satozaki does not start. Naaaah.)

Lots of power from both guys. Okawari-kun’s been injured for over a year and is just now back. He’s not back fully for sure, though. He hasn’t hit well at all in 100+ PAs since his return. Still, he’s very very dangerous.

Braz has been great. The only knock on him is not him, it’s Itoh-kantoku’s refusal to play him against lefties for no reason at all. So if Braz is in the lineup, this clearly goes to Braz. If not, who knows???? But all ties go to Chiba. It’s my site, dammit.

Probably where the series is won or lost.

Other than Game 1’s starters – that’s Furuya vs Kishi – I have no idea who is starting Games 2 & 3, and neither does anyone else, I bet. Furuya’s awesome of course – he’s not called New Lefty Ace for nothing – and there might just be a steady diet of lefties. I wouldn’t be surprised to see Matsunaga get the start in Game 2 nor would I be surprised to see Naruse in Game 3. Other possibilities are Nishino and Karakawa, but I would bet on those three unless a righty is needed.

Kishi is solid, there’s talk of Okamoto and Makita next and I welcome such discussion. Doesn’t matter, Lotte Pitchers > Seibu Starters, inevitably.

Yet again – no snark necessary. Masuda, Rosa, Uchi, Fujioka are clearly superior to the Seibu pen. I don’t know that anyone would dispute that even on the Seibu side of things. Despite a nice lineup and good starters the Lions needed a push to get in – the reason they needed a push is their pen was awful.

They were better late but I don’t believe it for a second. Strong advantage Lotte.

On second thought, I probably shouldn’t discuss management, right??? Although let’s be fair – this team has played way above its head all season and some of the credit for that has to go to the bench. That was the regular season and this is the playoffs, though – Seibu has a recent history of underachievement especially at home, and Lotte has won the whole damn thing two of the previous three times we’ve made the PL playoffs.

My rankings were a clean sweep for Our Marines, and Our Marines are going to take the series as well.