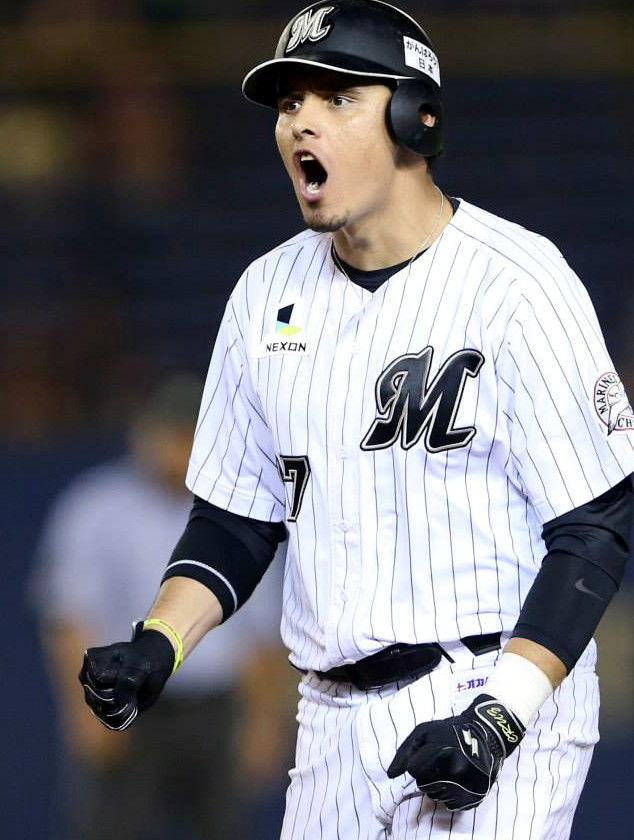 Series Preview: It’s hard to figure out this team sometimes. The players are wonderful, but the results on the field haven’t often matched the talent on the roster. In the last part of last month Chiba won some series and started building some momentum, only to squander all that momentum in a mismanaged sweep at home vs Hamu.

But look what happened next – after dropping game 1 in Osaka Our Marines blew the doors off the best pitching staff in the PL and took the series. Who saw that coming? And which team is going to show up at QVC, that team or the team that dropped the series to the Fighters? 48 games left, 6 games out of third, if there’s going to be a run it’s gotta be now. Fortunately we’ll see awesome rookie Ishikawa and New Lefty Ace Furuya for games 1 and 2, so the the chances of some wins versus the struggling Eagles are pretty good.

By: Steve Novosel A windy night at QVC made for a lot of early scoring, but in the end timely hitting and great work by the bullpen led Our Marines to their third win in a row. Hamu also lost today - is there time for Lotte to make a run for A Class?
Continue Reading
Maybe, maybe not. But if there is a chance and if there is time, grinding out this win was a good way to start. Rookie Ishikawa was honestly pretty awful the first three innings – a hit in the first, two in the second (with a run scored) and 4 in a row in the 3rd (including a homer, three RBIs). But he chilled down pretty nicely after those first three frames, going two more hitless innings and picking up the win.

Yes, despite those 4 runs in the first three innings, Our Marines fought back hard in this contest. The first of the runs came in the second as Despaigne blasted a ball off the top of the right field fence for a double, advanced to third on a ground out, and scored on a wild pitch – 1-1 game. After a Huffman walk, light-hitting Tamura smashed a double to left field, scoring Huff and giving Chiba a 2-1 lead. Tamura was thrown out trying to go for three on the throw home, but it was still his first career extra base hit and only his 4th overall.

Rakuten retook a 4-2 lead in the top of the 3rd, but after starter Aoyama walked the bases loaded full in the bottom of the inning, Fukuura unloaded them with a game tying, two run single! 4-4 after 3.

It wouldn’t stay tied for long – bottom 4, Gori pounded an Aoyama offering over the right field fence and into a happy fan’s hands for a 5-4 Chiba lead! Chad Huffman added an insurance run in the 8th on two out RBI single. And actually, that extra run was plenty as the bullpen held on nicely. Not that there wasn’t a few speed bumps along the way – Rosa got into some serious trouble in the 6th, mostly because Daichi couldn’t get a throw to first in time from deep in the hole, but Masuda took over and ended the chance.

It’s not all great news from this one, though – apparently Rosa was injured when he left the game, and Matsunaga couldn’t enter the game as he felt elbow discomfort when warming up. Reports are that both players will be removed from the active roster and replaced by…? Hattori? Yoshihara? Don’t know.

By: Steve Novosel Reasonable men and women would not be faulted for turning off this game early, as when Okada stepped into the box in bottom of the 9th Our Marines were facing a difficult 7-2 deficit. But these guys don't quit - a triple, a double, 2 walks and 4 singles later, the Men of Lotte were dancing at home plate as the 7-2 deficit turned into the most sublime 8-7 sayonara victory. I need time to catch my breath!
Continue Reading
Forget the details of the early innings. They’re not important. All you need to know about those early frames is that New Lefty Ace Furuya was… not good. Really not good. 5 1/3 IP, 8 H, 3 BB, 4 ER not good. It’s the latest in the string of perplexing starts for Furuya where he’s bounced between wonderful and not-so-wonderful. The nice thing, though, is that Furuya had no bearing at all on the final outcome, other than the early runs yielded making the eventual comeback all the more improbable, all the more dramatic.

18 year old rookie phenom Yuki Matsui was the Rakuten starter, and was looking for his first victory as a pro starter. In the swirling winds of QVC, Matsui had a difficult time finding the plate in places, walking 6 Chiba batters on the evening. All Our Marines could manage off of him was a pair of runs in the third, the result of an Ishimine double, great RBI triple by Shohei, and a timely single by Kakunaka. That cut an early 4-0 deficit to 4-2.

Chiba knocked Matsui out of the game in the 6th inning with a golden chance – a one out double by Imae and a pair of walks to Cruz and Saburo loaded the bases. Fukuyama took over for Matsui – Fukuura PH for Ishimine, but he popped out foul to left. Daichi grounded out weakly to second to end the chance.

Furuya was pulled for Minami in top 6, and while Minami was just fine in that frame he was anything but in the Rakuten Lucky 7. 3 BB, 2 singles and a sac fly, that 4-2 deficit ballooned to a 7-2 chasm. Egads! I honestly have no idea why Minami stayed in so long – two of the walks were to lead off the inning but Itoh stuck with him the entire messy frame.

Bottom 9 – Our Marines still faced that 5 run high hill to climb, the three game winning streak in serious jeopardy. Rookie Nishimiya takes over, a low pressure situation. Okada leads off – he rips a triple to left center, and Daichi knocks him in with a grounder through the right side – 7-3 Rakuten. Next batter is Shohei – he pokes the first pitch he sees for a single, and Kakunaka draws a walk to load the bases – NO! It’s a passed ball on ball four, Daichi races in to make it 7-4 Rakuten. Still no outs, Despaigne in the box with a chance to tie the game on one swing. Hoshino-kantoku has seen enough, he’s bringing in his closer Falkenborg (with whom we have a wonderful history). Falkenborg smartly walks Despaigne on 4 pitches – in steps Imae (I’m skipping the 3 pitch Kanazawa strikeout, of course). First pitch – a double down the left field line! Shohei in, Kakunaka in, 7-6 game…..!!!

Hoo boy, winning run is on base now! El Cochito up next, he laces a 1-1 pitch to shallow center! Despaigne in, TIE GAME! The ball is bobbled by Shimauchi in center but Imae wisely stays at third. One out still, Chiba has to win it now, must win it, we need this win! “Koala” Kawamoto is up, first pitch he sees he KNOCKS IT THROUGH THE LEFT SIDE! Gori is IN! All the way back from a 5 run deficit, 6 run scored in the bottom of the 9th, a once-in-a-year (if that) huge sayonara comeback!

And the best part? Nippon Hamu lost again, so just 4, teeny-tiny games back of that precious A Class spot. 4 little bitty games. There it is – we can see it. Can Lotte take it? I don’t know, but suddenly the race for the last Climax Series spot has gotten a whole lot more interesting.

By: Steve Novosel Can you believe it? I don't know if I can, but I must because it's true! Two nights in a row, a hugely dramatic SAYONARA win for Our Marines! It's a series sweep and the 5th win in a row for Chiba. Suddenly there's real life in Makuhari.
Continue Reading

Let’s boil this one down to some highlights:

-Chiba got the scoring started with a solo shot in the third by recently called up Shota Ohmine. Young Shota blasted the first pitch from Shiomi into the left field stands – not only was it his first career homer but his first career hit. Wow.

-Unfortunately Itoh-kantoku wanted to see more – Yuki came back out for the 8th inning and was clearly a bit gassed. A single, sac bunt, and double by Kaz Matsui later, the game was tied at one each.

-Big chance: For some reason Hoshino-kantoku wanted to ruin second year phenom Norimoto’s arm and his confidence, throwing him out of the pen for the second game in a row. A pair of hits by Saburo and Cruz + an IBB to Fukuura later, bases juiced for Iguchi. Unfortunately he popped to the catcher and Shota grounded out to end the chance.

-Bottom 10, Norimoto still in for Rakuten. With one out Shohei smashed a ball down the first base line – it ricocheted off the bag and into right field for a very lucky double. That brought up Kakunaka, and with the outfield playing very far in Kakunaka lined a deep shot over CF Shimauchi’s head! Shohei in easily, mayhem on the field, SAYONARA!

Celebrate, guys. All of you – jump around like crazy. You deserve this.

(Thanks to @the_hereford for the gif)