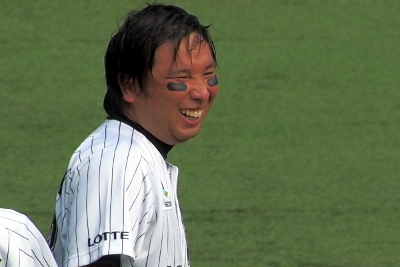 After a brief scheduled 4 day layoff that stretched to a 5th day following a rainout Friday, Our Marines restarted the Pacific League campaign with a whimper. Ace Naruse and the Lotte defense couldn’t stop Nippon Ham from scoring early, and as a result Chiba limped to a 4-2 home loss.

The Game
The good news is – Satozaki is back in the lineup! The bad news is, Naruse is still having some issues. If breaks went Lotte’s way a bit better we could be talking about a tight game and a Lotte victory, but that’s not how this one went down.

Hamu got the scoring going in the first. Yoh led off the game with a double down the left field line, and Obiki sacrificed him to third. Naruse wisely pitched around Abreu and induced an inning-ending DP… that was bobbled by Imae. No error on the play as Imae could get Abreu at second but Yoh crossed the home, and the Fighters took an early 1-0 lead.

In the third, Hamu struck again. Yoh sat on first after a 1-out walk, and with 2 outs Abreu crushed a liner deep to the fence. Ishimine (starting in center) didn’t get a great jump on it and couldn’t reel it in1. Yoh in, Abreu at second, and the Fighters up 2-0.

1I’d call that ball to center an Okada 5 – Okada definitely would have gotten it – but of course others might call my assessment harsh. It was absolutely no lower than an Okada 3, though.

Nakata singled to center to score Abreu, and Naruse found himself in a 3-0 hole. It’s easy to imagine how the score could be 0-0 at this point, if the defense was a bit sharper.

Lotte had a golden chance to score in the bottom of the third as Imae came to bat with the bases loaded (yet two outs). He blasted a ball to deep center but Yoh reeled it in to end the inning.

In the 5th, Yoh led off with a blast of his own to center, but we had no doubt at all that this one was going out. Off the screen in deep center and Yoh strutted home to make it 4-0 Fighters.

The good: that’s all they were going to get. The bad, our offense had a hard time doing anything. Yoshikawa got the start for Hamu but had to leave early due to some sort of injury. The bullpen team of Kagiya and Yanuki were very tough to hit, though. The two of them went 4 2/3 inning and only gave up 4 hits and no runs.

But Lotte would score in the 8th once Masui came in. 2 out walks to T OGINO and Daichi got things warming up a bit, and Satozaki delivered a timely hit in his first game of the year to plate the first run of this game. Ohmatsu was in as a pinch hitter next – and he smacked a single of his own to score Daichi! That made it 4-2 Fighters with still a chance to score more. Nemoto grounded out to end the chance, though.

Takeda closed out the Lotte lineup in order in the 9th, so that’s how the game ended. With Softbank’s win the PL lead is down to just one game.

New Addition
It was also announced today that Lotte signed former Seibu and Hanshin slugger Craig Brazell to a one year deal. Back in the days of the old ball Brazell hit a ton of long balls. In 2010 he crushed 47 of ’em, and he’s still just 33. Hopefully he can bring some more pop to the middle of the lineup.

He did have one of the more memorable at-bats I’ve seen at Chiba, this little epic:

I actually wrote up this game extensively when it happened. Today Saburo was batting in the DH spot, and he was just awful – 3 strikeouts, none of them competitive at bats. He was booed after the second and really booed after the third. And he’s batting .088 with RISP, so yeah. I don’t think there’s going to be a whole lot of objection to swapping him out of the lineup.

4 thoughts on “Not a Great Restart”