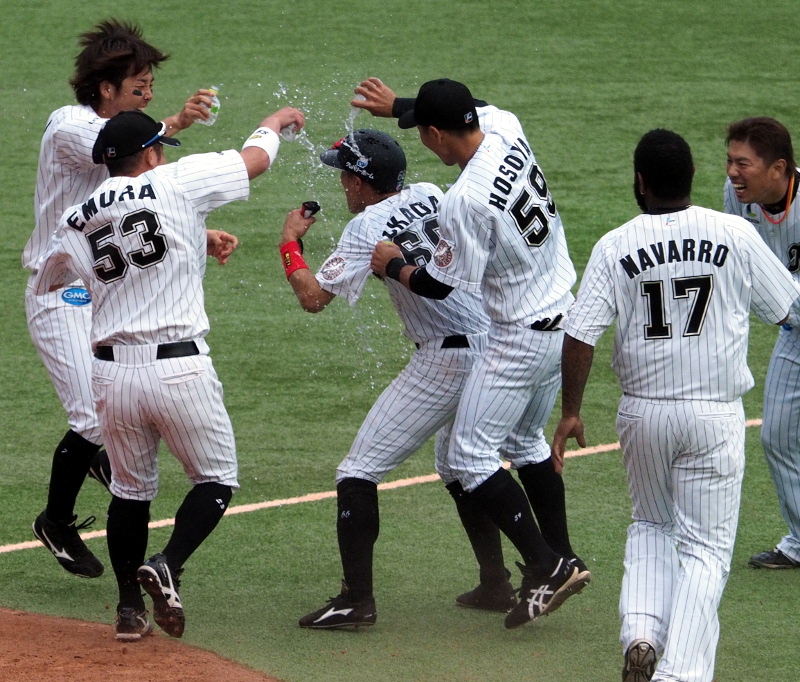 Our Marines lost three of four games at home this past week, falling off their first place perch in the process. Lotte dropped both games against the Hawks in a rain shortened weekday set, and then split a short weekend pair with the Buffaloes. Sure, I’m not exactly jumping for joy after winning just one game this week. Still, I have plenty of tingly feelings and positive thoughts after completing our first month of games.

Two of our losses this week came by just one run, both of which hinged on a stellar 8th inning defensive play by our opponent. Even our worst loss, a 5-0 shutout at the hands of SoftBank, featured another encouraging start from the young Futaki. We can also check another box in the positive column this week thanks to our major off-season acquisition Yamaico Navarro’s memorable debut in Saturday’s win.

Let’s start off by playing another note on the moral victory trumpet with Ishikawa returning to the rotation from injury on Tuesday, seemingly having not missed a beat. Ayumu was charged with just 2 runs in 7 1/3 innings, leaving with the bases loaded. That second run, the go-ahead run in the game, was walked in by Matsunaga after inheriting the bases loaded situation.

Still, it looked like Ishikawa would be off the hook for the loss in the home half of the 8th down 2-1. With the bases loaded and 2 out, Kakunaka shot a hard hit ground ball up the middle. However, the potential game winning strike was gloved by a diving Honda at 2B, preserving the lead for the Hawks who went on to win 2-1.

Our Marines couldn’t rebound in game 2, with the offensive managing to stoop even lower than the previous night’s 1-run performance the only way possible, getting shutout by the Hawks Wada. Still, one can’t help but find some joy in Futaki’s performance against the PL leading 4.95 runs per game producing Hawks. He followed up his first career complete game win (or any kind of win for that matter) last week by starting with 5 perfect innings against SoftBank on Wednesday. The Hawks eventually got to Futaki with a 3-run 6th inning1, leading to their eventual 5-0 win. Still, Futaki persevered through the trying experience of going from perfection to suddenly being on the losing end of a 3-0 deficit, finishing with a quality 8 innings of 3-run work.

1Steve’s note: And those 3 runs were so unlucky! Only one bad pitch in the bunch. A tiny single up the middle by Hasegawa, a walk to Honda after a sac bunt, then the one bad pitch resulting in a triple. Final run on a sac fly. Those 3 runs on 2 hits, only. Futaki-kun has one heck of a bright future.

Our Marines saved their lone win of the week for the only game Yours Truly2 could attend, taking the win on Saturday against Orix. Yamaico Navarro was awarded the co-hero’s honors in his debut in a Marines uniform. After previously dazzling the home crowd with some fine plays at 2B, he got the first hit of his NPB career on a first pitch swinging 2-run double to give the Marines a 3-1 lead in the 8th.

2 Needless to say, Steve is not feeling so chipper this Monday after attending all 4 games and suffering through the 3 losses. At least for all that effort he’s ever so kindly graced us with photo album of pictures he took this weekend.

Wakui wasn’t able to earn his 5th win in his 5th start, despite tossing 8 innings of 1 run ball. Nishino, very un-Nishino like, blew the 3-1 lead allowing Orix to tie it at 3 with two runs in the 9th. Lotte fired right back in the home half of the 9th, with Okada nailing a 1-out triple to right. Okada, gallantly took it upon himself to spare his teammates the burden of having to lift their bats off their shoulders, scoring on a wild pitch for the 4-3 sayonara win!

In Sunday’s game, the Marines were down 4-1 early, but stamped back (Yes, stamped back. See: Amazing Facts About Seagulls) on a 2-run Tamura double down the line in left, to make it a 1-run game in the 6th. The Marines had many chances to tie it, abandoning 5 men in scoring position in the closing 4 innings. It certainly seemed like we were going to score the tying run in the 8th when Iguhci lined a gap-shot with a runner on second, only to witness Orix’s Shunta make a diving catch in left-center. In the end, Jason Standrige took the tough 4-3 loss on Marine Fan Festa Day.

2 thoughts on “No Schism In My Optimism Prism”