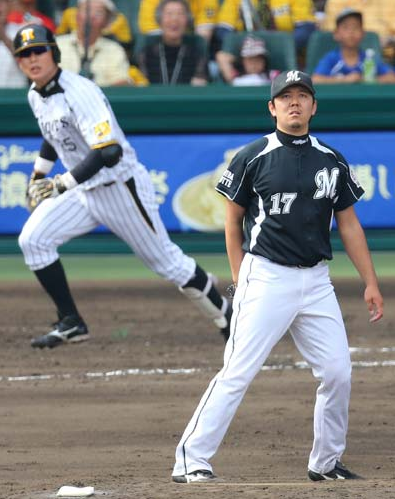 In a battle of number one starters, our ace Naruse was out-dueled by Atsushi Nohmi in a 3-1 win for the Hanshin Tigers over the Marines at Koshien Stadium.  Naruse only gave up 2 earned runs in 7 innings, but it was not enough to best the Tigers ace.  Nohmi hurled a rather efficient complete game 3-hitter, logging just 103 pitches.  The Marines are now 0-2-1 versus the Tigers on the year.

Naruse came into the game sporting a 6-1 record and 2.11 ERA.  Nohmi headed in with a 5-2 record and 2.70 ERA.  Despite these overall numbers favoring Naruse, Nohmi had been throwing much better as of late.  Nohmi was fresh off a complete game one-hit shutout versus the Buffaloes, his first start in June after being awarded May’s MVP pitching honors for the Central League.  Meanwhile, Naruse had allowed 6 HR’s in his last three starts for a 5.19 ERA, and hadn’t gone longer than 6 1/3 in each of his last 4 starts.

Nohmi did look sharper straight out of the gate.  Nohmi went once through the Lotte lineup without giving up hit.  On the other hand, Naruse gave up 3 hits in the first two innings, including a lead off bunt single by former Marine Nishioka.  Nishioka dove head first into first base, appearing to injure himself by smashing his sunglasses against his skull.  However, after a not so brief delay, he would remain in the game.

Despite Nohmi’s dominance, Lotte would strike with the first run.  Leadoff man Nemoto smashed a first pitch solo homerun to dead center with 2 out in the third. That makes 3 homeruns for Nemo on the year, getting two of Chiba’s three hits on the day.  The Marines were up 1-0.  After Naruse sat the Tigers down 1-2-3 in the bottom half of the inning, things were looking good for Lotte.

Chiba took that momentum into the top of the 4th by putting the first two runners on.  On a 3-2 pitch, Iguchi drew his second walk of the game.  Imae followed by placing a base hit into shallow left center.  Kiyota bunted the runners over to 2nd and 3rd for the first out of the inning.  Next up, T. Ogino grounded a ball to short.  With the short stop Toritani playing shallow and the runners going on contact, Iguchi was hung up to dry in between third and home.  After Ogino’s fielder’s choice out, Daichi Suzuki grounded out on a hard hit ball to first.  Lotte squandered their chance to get to Nohmi.  He would go on to give up only one more hit the rest of the afternoon.

The Tigers would take control in the bottom of the fourth.  After a leadoff walk by Matt Murton, Takahiro Arai lined a homerun to left center for his 1000th and 1001st career RBI to make it 2-1 Tigers.  Naruse then gave up a single to Asai, still with no out.  Naruse got some help though when Ryota Arai hit into a fly ball double play.  Asai had taken off from first on a hard hit ball that would be eventually tracked down by Kiyota in right center.  Kiyota was able to toss the ball back in with plenty of time for Iguchi to casually jaunt over to the first base bag to get the runner.  Naruse would get the next hitter to fly out, but the damage had been done.  The Tigers had taken the lead for good.

The Tigers would add one more run in the bottom of the 6th.  After a pair of walks to the first two batters, Imae earned an error for mishandling a throw to third on a sac bunt attempt. The Tigers were threatening with the bases loaded and zero out. Naruse struck the next batter R. Arai out looking, and then induced what should have been an inning ending double play.  However, the umpire called the runner Fujii safe at first, as a run came across to make it 3-1 Tigers.   The blown call would turn out to be inconsequential to the end result. But at the time, the insurance run took the wind out of the sails for a team struggling to plate just one run on Nohmi.

The Marines went 1-2-3 in the 7th 8th and 9th innings.  There was one moment of hope when Iguchi led off the 9th by sending an opposite field shot to right.  But Kohei Shibata (who PH for starting right fielder Asai in the 8th) leaped against the wall and robbed Iguchi of an extra base hit on a ball that nearly left the yard.  Nohmi would go on to finish off the Marines for a complete game 1-run 3-hit performance.  His counterpart Naruse’s final line was: 7IP, 6H, 2ER (3R), 2K, 3BB.  Minami also contributed a scoreless inning in relief for Naruse who was pinch hit for in the 8th.