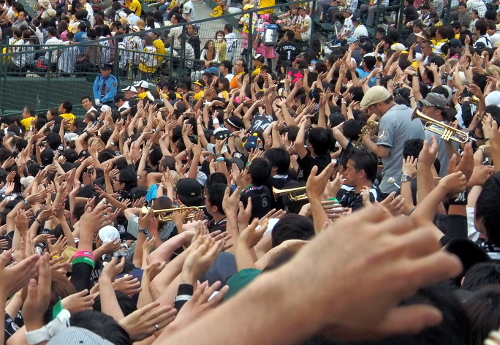 It was a rough afternoon for the Marines at Koshien Stadium, scoring only 3 runs on 15 hits while committing 2 errors.  The season finale with the Tigers was punctuated by a Matt Murton sayonara homerun, as Hanshin walked off with a 4-3 win.  Lotte hit into four double plays on the day, contributing to a total of ten men left on base.  Starting pitcher Ohmine was pulled after three innings (0 ER) for the second straight start, while the NPB save leader Masuda was charged with his 3rd blown save and loss.  The Marines finished the year winless against the Tigers at 0-3-1.  Their lead in the Pacific League also falls to two games, and Lotte is now two games out of the inter-league title with only four games left to go.

One began to get the feeling from first inning that the Marines were simply destined to go winless against the Tigers for the tenth straight try.  Hard throwing 19 year old rookie Shintaro Fujinami set the tone for Hanshin, striking out two Marines in a 1-2-3 first.  Ohmine seemed poised to counter with a 1-2-3 inning of his own, getting the first two outs in the bottom half of the inning followed by a Toritani ground ball to SS Daichi Suzuki.  However, Daichi’s throw pulled Iguchi off the first base bag (although it appeared to me that Iguchi’s foot kept contact with the bag long enough to record the out), and Toritani was called safe at first with 2 outs.

After Daichi’s throwing error, Matt Murton singled over the head of Nemoto at 2B.  Next up Takahiro Arai, fresh off yesterday’s go-ahead 2 run homerun, lined a ball directly toward Kakunaka in left. However, the liner handcuffed Kakunaka and bounced off his downward pointed glove for an E7.  Toritani came into score to make it 1-0 Tigers.  After a walk to the catcher Fujii, Ohmine finally escaped with a ground ball to short. The two 2-out errors brought Ohmine’s pitch count up to 36 after just one inning.  And for the second day in a row, a questionable call at first cost Lotte a run.

As I mentioned earlier, Lotte would score only 3 runs on 15 hits in a frustrating display of futility.  In the second, the Marines hit three consecutive two out singles.  But 2-out station-to-station ball was not a winning solution with the pitcher’s spot due up and the bases loaded.  Ohmine fought hard fouling off two 3-2 pitches, but eventually went down swinging on a gutsy eight pitch AB.

Iguchi would tie the game at 1-1 with his 13th homerun of the year in the third.  Lotte had chance to take the lead in the next inning thanks to two hits and a Hanshin error.  A double play by Kiyota would erase the first hit, and a fly out by PH Ohmastu (PH for Ohmine, 69P through 3IP) would strand the other two runners.  In the top of the 5th, a Kakunaka double play was mostly to blame to wasting two singles.

Chiba did have some success bringing runners home in the 6th.  Daichi Suzuki lead off with a single and stolen base, while Kiyota and Okada added infield singles to load the bases.  Yet, the Marines would be the victim of a double play for the third straight inning. With the infield playing in, Emura hit a one hopper right at the second baseman recording  a 4-2-3 double play.  Next up pinch hitter Saburo lined a single past SS Toritani.  Matt Murton bobbled the ball in left, allowing Kiyota and the speedy Okada to score easily.  Marines took the lead 3-1.

A Hurtin from Murton : The Sequel

Another Marines double play and a Tigers run later, Lotte clung to a 3-2 lead heading into the 9th.  Over four hours into the game, Masuda would come in to try and earn his 20th save of the year.  Number three hitter Toritani led off by slapping a single through the hole between 3B and SS.  Next up, cleanup hitter Matt Murton took a big swing at an 0-1 pitch.  The second it left the bat, there was no doubt.  Murton would play the hero for the second time this year against Lotte, hitting his second career walk off homerun, both coming in the last three games.  A sold out Koshien Stadium exploded as Murton rounded the bases, the Tigers won 4x-3.

Daichi Suzuki, Okada, and Kiyota each had 3-for-4 days at the plate.  In case I haven’t beaten the double play thing into the ground, Okada and Kiyota also contributed one each.

The bullpen only gave up 1 run in innings 4 through 8.  Hattori still hasn’t given up a run in 16 appearances, 9 IP.  Carlos Rosa recorded a huge strike out with two runners on and two out in the 8th, preserving a 3-2 lead at the time.  Former starter Fujioka came in again in relief in the 4th.

With the win and a Giants loss, the Tigers jumped 1/2 game ahead of Yomiuri for first place in the Central League.