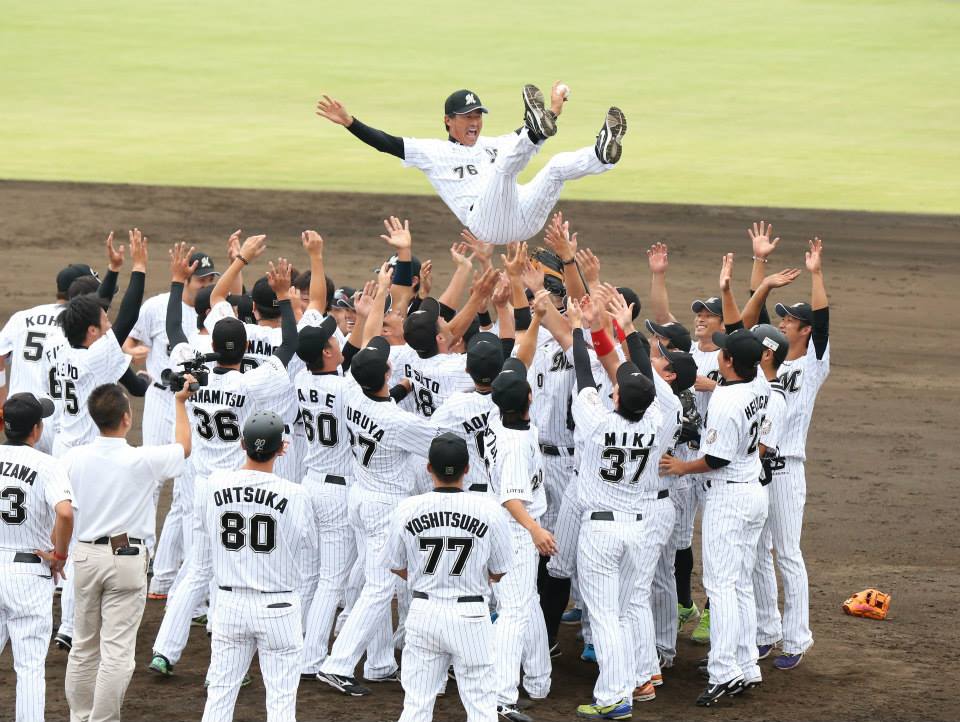 You might think that with the generally miserable season Our Marines have had that there would be no great news to share. Au contraire, mon frere! There’s all sorts of interesting things going on, many of them quite good!

We Are the Champions!
…of the Eastern League! Yes, Lotte has had quite the habit of winning ni-gun championships over the years, even pulling the double (ichi/ni gun champs) in 2010. Still it’s nice to see another this year – goes to show there’s plenty of talent in the pipeline1. Urawa clinched the title on Monday with a come-from-behind 5-4 victory at home.

Our Ni-Gun Marines will play for the overall ni-gun title on 4 October at Sun Marine Stadium in lovely Miyazaki. The opponent has yet to be decided as ni-gun Hawks and Carp are still battling for the Western league crown. Great work by Aoyama-Kantoku in putting together a winning squad.

Award Winners
We Love Marines here, of course, and we really love Yoshifumi Okada. How can we not? Despite his limitations as a player (he holds the NPB record for most career plate appearances without a home run at 1846 and counting, for example) his skill as a baserunner and an elite center fielder have made him one of the team’s most popular players.

Okada was the PL Gold Glove winner for 2011 and 2012, as well as receiving a special award for his amazing 359 consecutive chances in 2011 without an error – especially amazing considering how he plays CF. This year Okada is the 9th Georgia Spirit Award winner for his series of amazing plays vs Seibu in August – see the picture to the right (from marines.co.jp) for the first play. Congrats to Okada for receiving recognition for his fine work. See the video replay of the play here:

Okada is not the only award winner on Our Marines – our young catcher Tatsuhiro Tamura also received recognition for his fine work. Tamura just turned 20 this year and is in his second year on the team. He’s gotten significant playing time late in the year after rookie Yoshida went down with an ankle injury.

In the short time he has been with the ichi-gun squad he’s developed a reputation as a solid, even at times spectacular catcher thanks to his powerful throwing arm and quick release. Now he’s also been noticed for his work at the plate. Maybe you remember the game on 19 August versus Orix – if not, feel free to reminisce with Craig’s nice writeup. That sayonara stroke by Tamura earned him the Sky Perfect! Sayonara Award. Congrats to Tamura-kun!

Goodbye to a Lotte Legend
As we’ve mentioned, our long time catcher Tomoya Satozaki is retiring at the age of 38 after 16 years in a Lotte uniform. The process of giving thanks to a player who has provided us with so much joy over the years has already begun – ni-gun players gave him a “doage” at Urawa Kyujo over the weekend, and after the Eastern League championship clinching win on Monday hundreds of fans lined up to say bye to Sato. I’ll have much more about his career before the end of the season.

The retirement game for Satozaki has already been decided – it will be the final weekend game of the season, 28 September at QVC vs Orix. Satozaki will put on his uniform for the last time as a player (I hope he returns as a coach!) and stand in the batter box one last time. I expect deafening cheers from the crowd, and quite a few tears as well – yours truly, included.