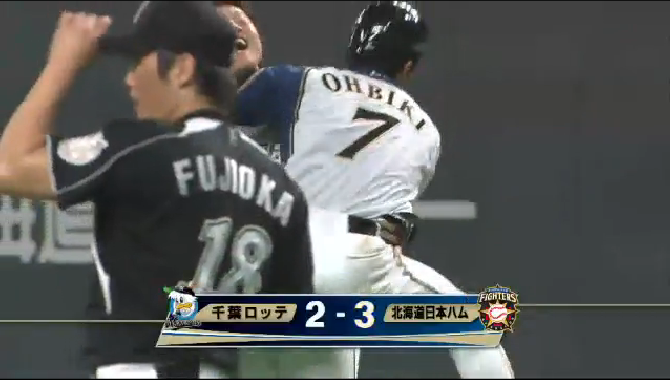 I think it’s fair to say that as a unit, our relief pitchers have been the most reliable sect of the Marines roster.  The bullpen has been credited with the occasional loss in 2013, but they’ve also held onto many a lead in many a close game this year.  The likes of Matsunaga (2.08 ERA), Carlos Rosa (1.75 ERA), Masuda (2.74 ERA and a league leading 26 saves) and recently Uchi, have succeeded more often than not when called upon.  Maybe you see where I’m going with this…On Saturday the bullpen couldn’t back up Karakawa’s six and a third, one eanred run performance.  Little by little, the Nippon Ham Fighters picked away at Lotte’s early 2-0 lead to eventually win in sayonara fashion.  The final score would read Fighters 3 – Marines 2 in 10x innings in front of nearly 35,000 at the Sapporo Dome.

It’s been a bit of a struggle watching tonight’s starter Yuki Karakawa pitch this year.  Part of the frustration comes from the fact that his stuff can be quite filthy, which it was for the most part on Saturday.  The Baby Faced Killer wheeled and dealed his way through the Fighters lineup for the first 6 innings on Saturday, shutting them out on 4 hits, 5 K’s, and 2 walks.  After giving up a hit and sac bunt to start the 7th, Karakawa was pulled and relieved by Uchi.  The runner would eventually score, causing Karakawa to be charged with one run.  His final line was 6 1/3 IP, 97P, 5H, 5K, 2BB, 1ER.  If Karakawa can consistently be relied upon for lines like that, he’ll be exactly what we need as a middle of the rotation guy down the stretch.

The offense spotted Karakawa a 2-0 lead in the 4th, but that’s all they could provide on a 5 hit day.  Lotte had a chance in the 2nd after Imae led off with a double, followed up a Satozaki walk.  But two failed bunt attempts put Kakunaka in an 0-2 hole, resulting in a fielder’s choice at second base.  Still, with runners on the corners and 1 out, Aomastu came to the plate.  But a hard grounder to third led to a 5-4-3 double play, ending Lotte’s scoring chance.

Aomatsu had a chance to redeem himself in the 4th, coming up with the bases loaded and 1 out.  Again, he hit a grounder to third. This one wasn’t quite as sharp, and toward the hole between 3rd and short.  Third baseman Koyano manged to scoop up the ball despite a brief bobble, but couldn’t complete the off balanced throw to second, sending the ball into right field instead.  Iguchi and Imae would score making it 2-0 Lotte on the error.  Our Marines now had a chance to strike for an even bigger lead.  So what do you do with runners on the corners, 1 out, a deflated opponent on the ropes, and a guy hitting .271 in Daichi at the plate?  If you said, “Squeeze bunt on the first pitch”… You’re a winner!  Unfortunately, the play resulted in a pop-out foul double play to the catcher.  Sigh.  Inning, and Chiba’s only real threat of the afternoon, prematurely over.

Let’s revisit where we left off with the pitching in the 7th.  Uchi came in to relieve Karakawa, but had some bad luck with his first batter Yoh.  With a runner on second and one out, Yoh sent a difficult, but probably playable grounder up the middle.  But right as Daichi was ready to field the ball on a bounce, the ball clipped the front of the second base bag.  Daichi still got his glove around the misdirected ball, but the high bounce gave the speedy Yoh enough time to reach first safely.  The next batter Ohbiki drove in a run on an RBI double to cut the lead to 2-1.  Uchi limited the damage though by recording two big outs, including a big strike out of Sho Nakata to end the threat.

More tough luck came way for the Lotte bullpen, as Carlos Rosa came out to pitch the 8th.  Koyano led off with a deep fly ball to center.  Golden Glover and center field Spiderman, Okada positioned himself against the center field wall, got under the ball, timed his jump perfectly, met the ball with his glove…but couldn’t squeeze the ball in his glove, as the ball bounced out and hit the turf.  Rosa struck out the next batter, and Matsunaga came into try and prevent Koyano from scoring from second with 1 out.  After a fly out, a walk, and a single the bases were loaded for Yoh.  Matsunaga just missed outside on a 3-1 pitch to walk in the tying run.  Matsunaga struck out the next better Ohbiki looking on an inside pitch to preserve the tie at 2-2.

Meanwhile, the offense went 1-2-3 in each inning from five through nine.  Matsuda struck out the side after a lead off walk in the the 9th, sending the game into extras.  Craig Brazell had a one out hit in the 10th, and Daichi sacrificed him over to second.  Satozaki drew a walk to put runners on 1st and 2nd for Takuya Takahama. The 24 year old defensive replacement, in just his 6th AB of the year (and 9th in 2 years) grounded out to short for the third out.  Fujioka came in to pitch for Lotte in the bottom half of the 10th.  Fujioka couldn’t recover from a lead off double by Imanami, as after reaching third on a sac bunt, Imanami scored on a sayonara single by veteran catcher Tsuruoka.  Fighters won 3-2 in walk off fashion.

1 thought on “Lotte Falls in Extras”