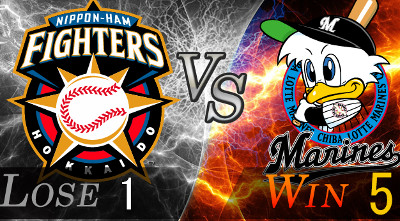 For the 4th series in a row, Our Marines came into the the 3rd game of the series with a chance to take it. And has been the case for every series so far in August, the Men of Chiba did just that, putting together timely hitting and impressive pitching from a whole host of players to take the finale from Nippon Ham 5-1.

Strong Arms
Nobody expected much from our starting pitching today, to be honest. Ohtani came into the contest with an 8+ ERA and had not even reached the 5th inning in any start this year. He as not fantastic by any means but got away with very little damage despite getting into huge jams in both the second and third innings. The final line – 5 IP, 4 hits, 3 walks and a HBP, 1 earned run matched up with 3 Ks. It ain’t great but it was enough to give the bullpen a chance.

The trips to the pen got off to a bit of a rough start, though as Ledezma took over for Ohtani in the 6th and promptly gave up a pair of hits plus a sac bunt to get into a serious hole. That led to Uchi getting called in to fix the mess, and of course Uchi was the answer to all the problems as he got the last two outs of the inning on only 7 pitches.

In fact every reliever after Ledezma was absolutely perfect – Carlos Rosa, Matsunaga, and Masuda combined with Uchi to pitch the last 3 2/3 innings without allowing a single Hamu to base. That’s efficient and dominant – like Craig mentioned yesterday, the pen has surely been the most consistent component of the team this year.

Timely Hits
Could the Lotte bats support the nice pitching? Yup, indeed they could. Chiba repeatedly got men on base – 15 total on 10 hits and 5 walks for the game – and the hitters behind them brought them in.

Lotte got on the board first in the 3rd inning, as Takahama, T OGINO, and Okada all reached base via single with one out. The Okada single was particularly cool as he beat out a bunt for a hit. That loaded ’em up for Iguchi, and he drew a walk to make in 1-0. Imae cranked a deep fly to center next, plenty deep for T OGINO to tag up and make it a 2-0 game.

In the Lotte Lucky 7, Our Marines got to Hamu starter Yoshikawa and reliever Tanimoto for another run. Daichi poked a 1-out single to center (2-3 with a walk and 2 runs scored on the evening for Daichi), and Satozaki drew a walk to move Daichi to scoring position. Tanimoto came in and got Braz on a fly to short but walked T OGINO to load the bases again. Okada smacked a single to right to score Daichi easily and make it a 3-1 game.

On to the 9th, still a 3-1 game since the Lotte pen was such a stifling force on the evening. Chiba definitely wanted some more padding to give Masuda some breathing room, could they do it against Masui? Oh yes. Much like the 7th inning, this rally got started by Daichi, now via a nice double. Sato bumped him to third via sac bunt to bring up HISAO as pinch hitter. Heiuchi dropped a double down the right field line, of course Daichi is in, and the score up to 4-1 Lotte. T OGINO singled to right (2-4 with a walk and a run scored) to put runners on the corners with just one out, bringing up Okada. Our all-galaxy center fielder singled yet again to score Hisao, giving him another modasho to go with his two in Kobe last weekend and giving Our Marines a 5-1 lead, the final score.

This past stretch of 9 games in a row on the road definitely could not make our season but a rough patch could have sunk it, just like happened last year. The next 12 games are just as crucial – a 9 game home stand against Rakuten, Orix, and Seibu followed by the last road trip to Sendai for the year. I’m hoping we can get through the next stretch well above .500 – maybe as good as 9-3 – to draw ever closer to the Eagles.

4 thoughts on “Another Series Win!”