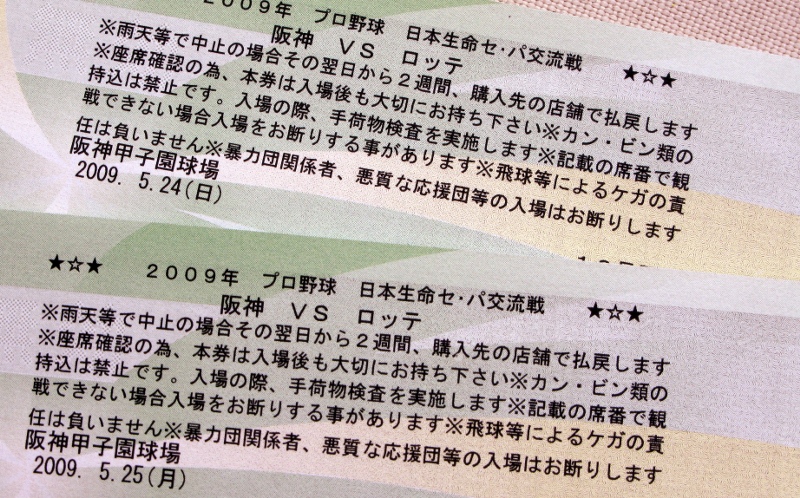 I’m more than a little late with this, but I have a good excuse, really! After Saturday’s second game vs Chunichi I hopped a Shinkansen down to Osaka for the Sunday-Monday series with the Hanshin Tigers in famous Koshien. We were not alone on our journey, either. On the platform at Tokyo station there were bunches of young people with baseball memorabilia and markers trailing men in masks. I took a closer look – Marines! Yes, we took the Shinkansen to the game with many of the Marines players.

As I stood in line to board the train I chatted with Lotte reliever Furuya. I’m not sure he knew what to make of me, as the conversation went like:
Me: “Going to Koshien tomorrow.”
Him: “Yes, we have a game there.”
Me: “Yeah, I know, I’m going to be there, too.”
Him, raised eyebrow: “Really?”
Me: “In the Lotte outfield. We’re big Lotte supporters!”
Him, raising other eyebrow: “Oh, um, thanks!”

I’m not sure who all was on the train with us, but I ran into Kobayashi (who gave me not a double, but a triple take when he saw my Lotte cap), Kawasaki (playing games), Ohmine (sleeping), and Karakawa (studying video of batters). I wasn’t about to disturb them while they were relaxing so I figured I would take a picture or three when they got off.

I’ll have a bit more road-trip sort of notes in a different post. Suffice it to say, I was quite excited to come to Koshien and cheer for Lotte! Sunday turned out to be a great day for baseball.

Oops. The forecasters said there was a 50% chance of rain, but it was nice and sunny when we got to the stadium about 1.5 hours before first pitch. We wandered around the stadium a bit talking to some of the down-to-earth Tigers fans.

Actually, I’ve always loved the Kansai region (as I lived there for a time a few years ago) and have always found the people there to be very friendly. At the stadium was no exception, as so many people just wanted to chat about this and that, baseball, life. The whole environment was more like a social club than a baseball game.

Lotte fans were in good form as always. Most of the fans I talked to were from the area but I know a few made a Sunday day trip from Chiba. Unfortunately for them the game never officially happened.

Of course, the usual suspects came prepared with horns, drums, and the will to help push Lotte towards victory.

If the game had actually happened, Kobayashi would have taken the mound and would have pitched well for 3+ innings. He also would have had a great 9 pitch at bat fouling off pitch after pitch; pretty good for a pitcher from a DH league. If the game were played, of course.

In the 4th some storms moved in and the rain started to fall. The game played on, but lightning struck twice near the stadium, so they called it. It was quite a scary situation – not because of the lightning, but of the Koshien backup plan for a rain delay. See, so many people jammed into the upper concourse that it was quite impossible to move under any circumstances. Not a good idea, and I’m surprised they allowed it.

In any case, the game is made up on Tuesday, but unfortunately for me I had to head back after Monday’s game.