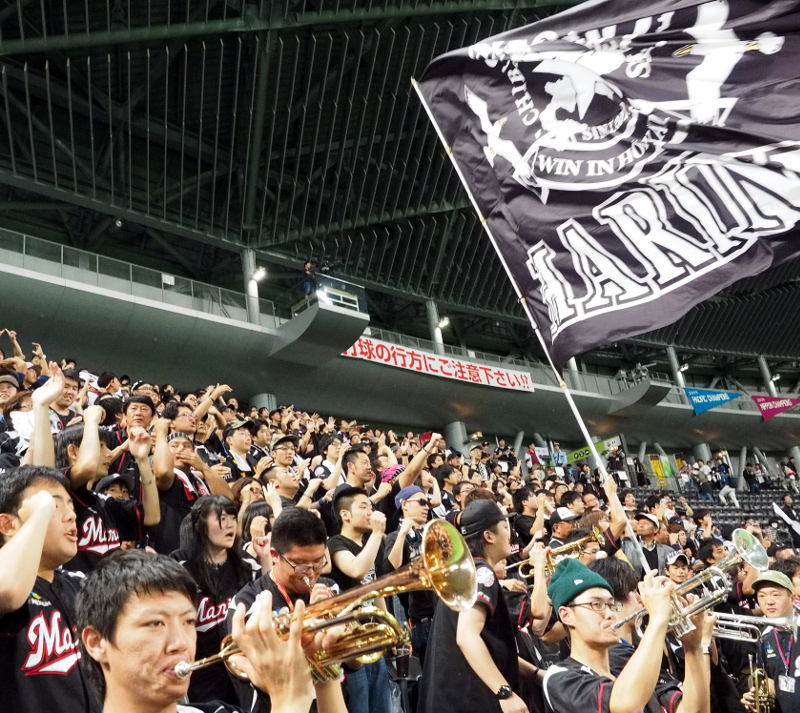 The character of the cheering has changed over the years I’ve been a Lotte fan, mostly due to the change of ouendan leaders after the failed Bobby 2010 campaign and the acrimony between fans and management throughout the 2009 season. As the 2010 season began, all the old songs from the 2000s were thrown away, and new ouendan leader Jin Toshio wrote all new songs for the team. It was a confusing time, but a lot of the new songs were great (see: T OGINO, Kakunaka, Chance 1) but overall the feeling was, and is, different.

I’ve often wondered why the songs can’t be sung? Copyright? Yes, the copyright on the old songs would be owned by the previous main ouendan group (Marines Victory Productions) but a) surely they weren’t so strict on that ownership that old songs absolutely could not be used and b) how strict could copyright be on songs that are almost all adaptations from other sources? I understand there was bad blood, but this bad? Nevertheless, singing the old songs was strictly forbidden, even to the point where We Fans wanted to sing some of the old songs at a ni-gun game in Funabashi last year but were requested not to, due to the potential to hurt feelings.

But that’s exactly what happened! During the 4-run comeback in the open-sen game vs Orix on 13 March, suddenly the ouendan started to play the old chance make theme! And what else – is it? Really? Yes, it’s old favorite Skinhead Running, probably the song best exemplifying the 2004-2009 Lotte Ouendan. And I gotta say, the thought of being able to cheer to the old songs as well as the new songs is GLORIOUS.

Is it true, though? Was that just a one-off in open-sen? Last year I was at a party in Fukuoka during opening weekend with the ouendan, we sang man of these old songs in secret (SHHH!) After the 13 March open-sen game this year, though, the ouendan went on the field with fans for cheering practice – lo and behold, some of the old songs are officially BACK![/cs_text][x_feature_box title=”Onfield Cheer Practice, 13 March 2016″ title_color=”” text_color=”” graphic=”image” graphic_size=”60px” graphic_shape=”square” graphic_color=”#ffffff” graphic_bg_color=”#2ecc71″ align_h=”left” align_v=”middle” side_graphic_spacing=”20px” max_width=”none” graphic_image=”http://106.186.20.66/wp-content/uploads/2016/03/baseball.png”]All videos from YouTube user miyakou26[/x_feature_box][cs_text]It’s Skinhead Running, back in the rotation will all our other chance themes! Look how excited everyone is to sing it again.[/cs_text][x_video_embed no_container=”false” type=”16:9″][/x_video_embed][cs_text]And here’s the old chance make theme we call “Elise”. Why is it called “Elise”? Listen to it – it’s gotta be the only baseball ouenka set to Beethoven, in this case “Für Elise”.[/cs_text][x_video_embed no_container=”false” type=”16:9″][/x_video_embed][cs_text]Saburo’s newer ouenka is fine, but the brief, joyous song that is Saburo’s old song is a bit more… to the point. It’s back (in the later “Let’s go, Saburo!” guise, not the older “Hooray for Saburo” version), and the cool thing is apparently we’ll be singing both.[/cs_text][x_video_embed no_container=”false” type=”16:9″][/x_video_embed][cs_text]Fukuura’s ouenka is much in the same boat as Saburo. His new one is great, but the older one is legend. Just like with Saburo, we get to sing both!

Interestingly enough, that makes Fukuura the only player with THREE ouenka, as we frequently sing the main cheer song for his alma mater Narashino High School with a special Fukuura version – “Let’s go Fukuura!”[/cs_text][x_video_embed no_container=”false” type=”16:9″][/x_video_embed][cs_text]Maybe it sounds stupid to you, I don’t know, but for me, I think this sort of look to the past is just the ticket to get more fans back in the seats. The atmosphere hasn’t been quite as intense in the years since 2009, and perhaps revisiting a piece of those years will bring back some fans who haven’t attended as often in recent years.

After all, Lotte home games used to be events much like road games are now, but home attendance these days is a full 30-40% off the attendance pre-2010. Let’s hope to see a full gaiya every home game this year![/cs_text][x_share title=”Share this Post” share_title=”Everything Old is New Again” facebook=”true” twitter=”true” google_plus=”true” linkedin=”false” pinterest=”false” reddit=”true” email=”true” email_subject=”Hey, thought you might enjoy this! Check it out when you have a chance:”][x_author title=”About the Author” author_id=””][/cs_column][/cs_row][/cs_section]

2 thoughts on “Everything Old is New Again”