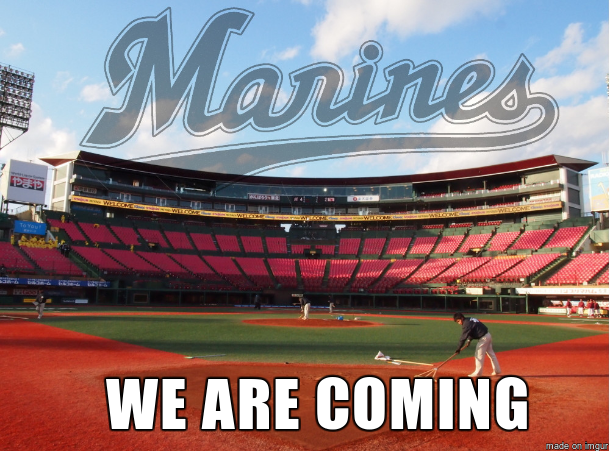 One might think I am a crazy man or in the best case an impossibly starry-eyed dreamer1 to pick Lotte and this game, but that’s what I am going to do. Rakuten hasn’t played a meaningful game in quite literally 3 weeks. Yes, they took the season series 14-10 from Our Marines and were 10-2 in Sendai vs Chiba, but almost all of those Rakuten wins were when the weather was hot. In recent years Lotte has played MUCH better in Sendai when the weather is cooler (and in fact much better overall in lower temps) including 4-wins-in-a-row in April and a 3-game sweep to start the season last year in Sendai.

1I’m not the former though I am definitely the latter, I admit.

I think the last head-to-head matchup between Tanaka and Naruse was last year’s opening game – a game that Our Marines won 5-3. In fact even this year Naruse has pitched best against Rakuten of all PL teams – in two games, he’s only given up 1 run for a 0.64 ERA. Of course Tanaka’s been great against us as he has against everyone – 2 ER in 3 games against us for a 0.75 ERA. But don’t forget that the closest he came to losing a game this season was against Our Marines, in Sendai, and in fact had the game lost until our pen blew it.

In another fine example of the lack of skill I have at picking games, Rakuten beat Our Marines and Naruse 2-0 in the first game of the CS Final Stage. It’s not the end of the world by any means – a reasonable observer would expect Rakuten to have the edge in this one thanks if nothing else to Tanaka, and sure enough Tanaka was the difference.

No worries about Naruse’s condition in this one – he was more than up to the task, giving up just one run on 6 hits in 7 innings of work. How many games would one expect to win with that line – 95% of your starts? Unfortunately Tanaka was better – he went the distance despite yielding 7 hits and a walk, striking out 9 along the way.

It certainly can’t be said that we had no chances – Lotte had a pair on in the first and scored nada. Another pair reached in the second after Daichi’s leadoff double and Kiyota’s infield hit – Satozaki GIDP. Another pair in the fifth – zip. A one-out chance in 7th – another Satozaki GIDP. Both Nemoto and Imae drilled huge fly balls in the 8th – Imae’s with a runner on – but they died at the fence.

These missed chances, they do indeed burn.

Rakuten only got the one run off Naruse, and it came in the most Naruse way possible – solo shot by Ginji to lead off the fourth. Other than that one mistake, Naruse looked pretty sharp. The other run was credited to Ledezma in relief of Naruse in the 8th inning, but it was pretty unimportant the way Tanaka pitched.

This game was not absolutely critical – but the same could not be said about Game 2. Lotte’s gotta win that one to have a reasonable hope at winning the series.