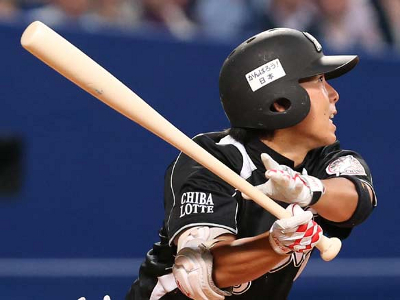 My favorite baseball memory took place in Nagoya Dome. With 2 outs in a tight game, an emerging young Lotte played lofted a ball deep into the gap in right center, driving in what would turn out to be the winning run. That was game 7 of the 2010 Nippon Series and the hero was of course Okada. 30 months later Daichi Suzuki launched a ball to much the same spot scoring two Men in Black and propelling Our Marines to a great come from behind 3-2 win over the Chunichi Dragons. Sometimes history keeps repeating itself, and when it comes to stirring victories like this one, history can keep repeating repeating itself.

Winning the Arms Race
With the exception of a three-batter-in-a-row lull in the second, Lotte pitchers completely befuddled the Chunichi bats tonight. Yuji Nishino got the start, and he and his mates in the bullpen took care to not leave the Dragons even the slightest opportunity to score after that stretch in the second.

Nishino, Fujioka (?!?!), Nakagoh, Hattori, Matsunaga, and Masuda combined to retire 23 of the last 25 batters faced. The only blemishes were a walk to Luna in the 6th and a single by Fujii in the 7th. That is serious domination. Even Masuda looked like give-them-no-hope Masuda of a few weeks ago, only requiring 9 pitches to shut the door in the 9th for his 15th save.

Smack Smack Score Score
It’s odd how anomalous the two runs that Chunichi scored were. All of a sudden in the bottom of the second Nishino gave up back-to-back-to-back doubles to right, the last two by Ibata and Fujii scoring a run each. The offense came from nowhere and left as swiftly as it came for the Dragons. But could Lotte score runs of their own?

Cabrera started for Chunichi and looked quite strong for 5 innings (with an exception mentioned below). In the 6th, Imae hit a nice 2-out double, and Kiyota followed up with a timely single to center to score Imae and make it 2-1 Chunichi.

That was it for Cabrera – Tajima came in from the pen and immediately plunked T Ogino. HEY DON’T DO THAT but we’ll take the base runner. Daichi up – and Daichi smacking a 2-2 pitch to right center scoring Kiyota and T Ogino! A 3-2 Lotte come-from-behind lead!

That was it for the Lotte offense but when the pitching was as unyielding as the Lotte pen was, the 3-2 lead is all that was needed.

Huh?
The win would go not to Nishino, though but to Fujioka as Nishino was pulled for a pinch runner in the 5th. Let that one soak in for a moment. Given how well Our Marines have played in the last month it’s hard to criticize Itoh-kantoku for anything but I must confess I have absolutely no idea what was up with that.

The scene: T Ogino awesomely leads off the Lotte 5th with a single. Even more awesomely, he swipes second without even the thought of a throw from Tanishige. Two outs later, Nishino is up and draws a walk and Ishimine is in to pinch run for him. If he didn’t injure something strolling to first, I can’t for the life of me imagine why you would let the pitcher hit then pull him for a runner, especially when he was looking strong.

Ishimine pilfered second, and Nemoto rocketed a liner down the 3rd base line – but rather amazingly speared by Luna to end the inning. Of course this all worked out in the end as Our Marines won the game but I am quite curious as to why such a decision would be made.

Hotness
Daichi, of course. Not only did he have the game winning hit but he was super solid in the field all night.

Fujioka looked fantastic in his two innings of work, his first ichi-gun time in 3 weeks.

Less So
You can’t say enough good words about Emura behind the plate but he needs to work on his discipline at it. 0-4 on the evening.

Nemoto had some super bad luck – 3 straight liners to Luna – but 0-5 isn’t exactly what’s needed in the leadoff spot.

Tomorrow’s game features the third start of the year for Abe against… Yamai? Who is not really a starter these days but there you are. He is tomorrow.

5 thoughts on “Comeback Marines Are At It Again!”