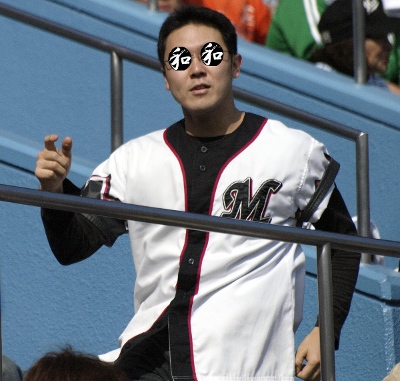 The Marines and BayStars played the second of two interleague games in Yokohama tonight. What was a close game early turned on some controversy, injuries, and a hell of a lot of pitching changes. In the late stages, our Chiba Lotte Marines pulled away to seal a 14-6 road victory and the 2-game series sweep of Yokohama. The victory was a total team effort as 8 men recorded RBIs, 7 pitchers took the hill, and 14 position players played.

I would like to give you great, in-depth detail of the early innings but the broadcasters of the Yokohama home games in their infinite wisdom only started coverage at 7pm and ended it at 9:30pm. I only had the option of watching the first three innings via highlights – and “Pacific League Movie” on YouTube isn’t showing any of the interleague games! How do BayStars fans put up with such crappy coverage? I’m glad 80 % or so of the Chiba games are on J-Sports, Gaora, or A+.

ANYWAY, young Yuki Karakawa got the start tonight but was knocked out before I had a chance to watch him pitch, thanks to taking a line drive off his right hand. He was pulled after the second inning and taken to a hospital for tests, which apparently came back OK (someone kindly correct me if I read the reports wrong in Japanese). He was back in the dugout for the end of the game, so hopefully it’s nothing too bad.

Karakawa gave up a run in the second before leaving the game; coupled with the run Lotte scored in the first on a Kim Tae Kyun ground out (after an Ogino double – 2-6 on the night with 2 runs scored and an Iguchi single – 4-5 with an RBI and 2 runs scored) the game was tied after two. Ohtani took over for Karakawa and promptly coughed up a pair of runs on RBI singles by Murata and Terrmel Sledge. It was 3-1 Yokohama after 3.

In the 4th Lotte clawed a bit back, thanks to a double by Ohmatsu, a single by Saburo, and a sac fly by Imae. Lotte tied it in the 5th in a very typical manner for this year – Ogino singled to center with two outs, stole second on a freakin’ pitchout, and scored on Iguchi’s single to center. That’s really our offensive season, encapsulated – 3-3 after the top of the 5th.

In the bottom of the 5th Akichika (in for his second inning of relief of Ohtani – he actually got a chance to bat in the top of the inning) gave up the go-ahead run, but it wasn’t really his fault. Ishikawa singled to right, Saburo bobbled the ball so that Ogino had to field it. Ishikawa advanced on a passed ball by Matoba (getting the start behind the plate) and scored on a sac fly by Murata. 4-3 Yokohama after 5.

Sanada took over for Yokohama starter Tomo Ohka in the 6th and he was just brutal. A leadoff double by Ohmatsu, a one-out single by Imae, and a walk to Matoba loaded the bases. With Akichika’s spot coming up, Nishimura pinch hit with Fukuura. The veteran first baseman absolutely blasted a ball perhaps 20 rows up into the right field stands for a grand slam! – WAIT!, it’s called foul! I practically fall out of my chair, and Nishimura-kantoku does fall out of the dugout, heading right for the ump. I couldn’t believe the call, when I saw it live it looked to be fair by 20 feet. The local broadcast only had the shot on one view, an above the first base dugout cam. Still the umps went to the video replay. I thought it stood no chance of being overturned despite the seemingly obvious in-fair-territory hit, but after a few minutes of consultation – grand slam indeed! WOW. The 4-3 deficit was instantly a 7-4 lead!

That took the wind right out of Yokohama’s sails. I’m not joking, you could see it on their relievers’ faces. From that point on the hits kept coming and coming for Lotte:

Lotte ended up with a season high 14 runs in total on 19 hits. Yokohama scratched out two more runs but with their bullpen implosion they were of no consequence. The game ended mysteriously as the broadcast completed in the middle of the 9th, but I heard a rumor that the visiting Lotte fans were happy and there was a hero interview (though I don’t know who it was, presumably Fukuura).

Next up is the Kyojin – 2009 champions Yomiuri, Saturday and Sunday at the “Big, Dimly Lit, Cramped, and Too Easy to Hit Homers Out of Egg (Tokyo Dome)”. It’s the official name, I swear. Starters presumably will be Naruse on Saturday and Ohmine on Sunday, but they are not confirmed yet. I’ll be in the stands on Sunday, so look for a report then!