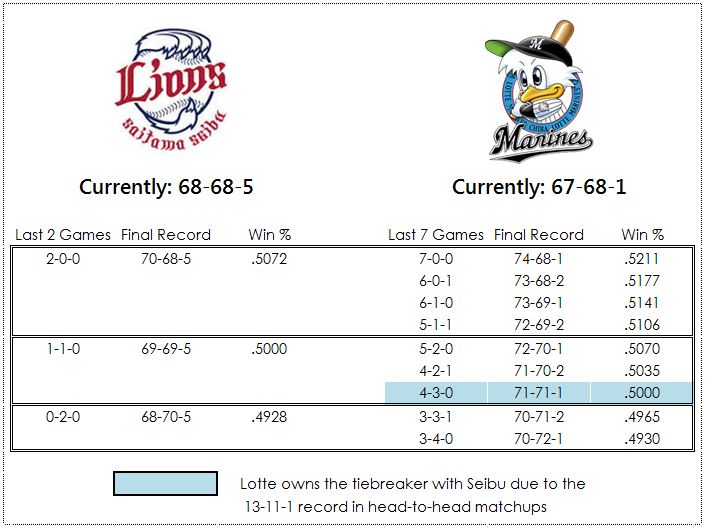 On Monday night at a jam-packed, roaring Seibu Dome, the hated Lions had a chance to virtually end Chiba’s season with a defeat. Instead, ace (yes, he’s the ace now) Ishikawa delivered a wonderful start, the bullpen brought out their best pitching, and the mighty bat of one Alfredo Despaigne smashed through Seibu’s pitching to earn an absolutely essential 4-2 victory.

Monday was a tough night to pull such a victory, too – the visitor section was reduced to try to turn the stadium into an “All Seibu” cheering zone (which of course was not going to work vs Lotte – we fans attend games better at Seibu than we do at QVC), it was the last game of the season between the teams and the last home game of the year for the Lions. Not only that, but longtime Seibu legend Fumiya Nishiguchi announced his retirement a bit back, and this game was his retirement game.

Kitty Kat starter Kikuchi shut down Chiba bats just under a month ago in the Seibu three game sweep at the Q, but this night he was really not effective at all. Our Marines got in the first blow in top 1, as a one-out Ishimine single and Kiyota walk set up a Despa timely single to left – a quick 1-0 Chiba. Another pair of walks in the second by Tamura and T OGINO went unused as Ishimine grounded out to end the chance.

Up-and-coming superstar Mori put Saitama on the board in bottom 2 with a liner into the Lotte fans in left – a runner on made that a 2-1 Lions lead. Combined with the 4 LOB so far for Chiba, I began to wonder just a tiny bit – a teensy little bit – if perhaps this night was not going to be ours. But: no.

That was it for the toothless Lions. A Ginjiro single (wasted), an Akiyama single (erased in a double play), another Ginjiro single (gunned down trying to stretch it to two), and an Okawari-kun BB (bupkis) was all that was produced in the bottom half of innings the rest of the way. Ayumu, Masuda, Ohtani, and new closer Uchi simply stifled the normally potent Saitama attack. Those bats had no chance.

But what about Chiba? Aw, we got this – more to the point, DESPA’s got it. Right after the Mori HR in the second, Kiyota led off with the 4th walk drawn from Kikuchi, and Despa belted an opposite-field jack into the roaring maw of ravenous Lotte ultras – his 18th on the year and the decisive blow in this game. That 3-2 Chiba lead would have held up for sure, but more is always better. In the Lotte Lucky 7 – more. A lovely Kiyota double and Despa free pass (that he EARNED of course) brought El Cochito Cruz to the plate, and with the melodious tones of Chance 2 resonating throughout Tokorozawa Cruz poked one up the middle to plate Kiyota, guts pose presented, 4-2 Our Marines. Fin.

The Nishiguchi retirement ceremony was a sentimental affair as they always are, and Nishiguchi was gracious in his acceptance of praise from both Lotte and Seibu fans, current and former teammates. It was great to see him pitch one last time, too – he came in in relief of Kikuchi and faced one batter (walk to Iguchi). So many Lotte fans stayed after the game for his retirement ceremony as well.

Where We Stand Now

We’re in pretty decent shape – Our Marines hold the key to the rest of the season. I was a bit off in my math yesterday – Seibu 2-0 and Lotte 5-2 leaves Chiba on the outside – but there are plenty of feasible scenarios that can bring us to the post season. Here’s where we stand now.

Seibu’s schedule is done after a pair of road games on Wednesday and Thursday, while Lotte is also on the road in Sapporo at the same time. We’ll have a great idea what needs to be done sometime Thursday night. Best case scenario, we can clinch a spot in the Climax Series on Friday at QVC vs Rakuten. Worst case scenario is we are eliminated Thursday night. With 6 of the previous 7 games ending in Marines victories I am confident we’re more likely to be looking at the former rather than the latter scenario, though.

2 thoughts on “The Road to Climax is Clear”