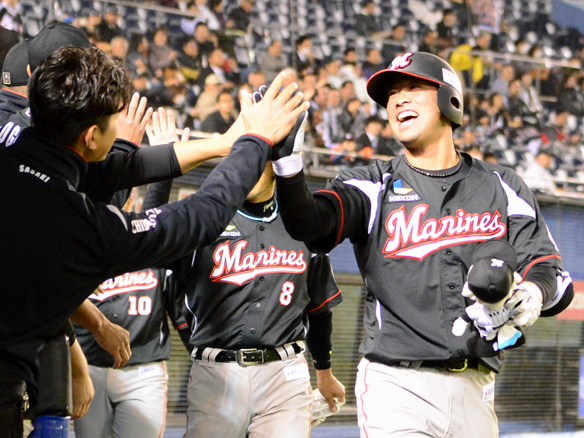 By Steve Novosel Now THAT's what we needed to start the season - lots and lots of hits, great pitching, and a laugher of a finish to give Our Marines the first win of 2014. Victory tastes so very sweet.

Let’s start with the pitching, especially our ace Naruse. For the first four innings he looked very much in command of his pitches, striking out 5 and allowing just one hit. But that hit was a doozy – a towering fly ball off the bat of Koyano that I basically assumed was gone in the gusty QVC winds, but it hit the top of the fence and stayed in. Koyano was thrown out soon after TOOTBLAN style, and Hamu scored nothing. Naruse gave up a run on 3 hits in the fifth, and after a double by Miranda in the 6th he was pulled.

Not the greatest outing for Naruse but a much better one than the last – and it was good enough to give the bats a chance to win the game. His final line – 5 1/3 pitched, 5 hits, 2 runs, 2 walks, 5 Ks.

Hot Bats
And now to the great stuff – Lotte bats were on FIRE in this game. Anemic offense as of late? Well, not on Friday at least, as Our Marines battered Hamu ace Yoshikawa and the Fighters pens for 17 hits and 9 runs. 9 players recorded hits – that’s everyone who got an at bat except T OGINO, making his first appearance of the year at ichi-gun.

Even the RBIs were spread out – 7 players picking up at least one. There’s Nemoto with his timely double for the first run of the game, AJA with his first career hit (and RBI) in the third with a double to the fence (he would go on to record 3 hits total – a modasho and his first appearance as the hero of the game). Captain Daichi had a pair of hits including the third run of the game. Imae and Saburo each drove in runs in the 4th. Yes, those two runs Naruse yielded were going to be no impediment to a Lotte victory.

A Strong Pen
If you’re counting, that’s 5-1 after the 5th inning, and as I’ve mentioned Hamu scored another in the 6th to make it 5-2. Worried? No, don’t be. Just like last year, the pen was on the job. Ohtani took over for Naruse – again, he was GREAT1, 2 quick outs on 11 pitches including a K. Fujioka – our 6th starter who missed his first start due to the rainout Thursday – threw a perfect 7th and 8th innings. And young Nishino made his first appearance of the year, walking the first batter but getting the next three quickly to close it out. That’s 3 2/3 no hit innings by the pen – superb.

1That’s 3 2/3 hitless innings by Ohtani to start the year, and with 5 Ks to match. Could it be a breakout year?

The offense was not done, either – the Lotte 8th featured a 6 hit attack punctuated by an Iguchi RBI and a massive 3-run jack off the bat of Kamagaya’s own Kiyota. It was his first hit of the year (though he has drawn 4 walks and a HBP for an OK .333 OBP) and it was a fitting cap to a great night.

Next up: Let’s win the series on Saturday at QVC.

By Steve Novosel What if I told you Our Marines would only be allowed a measly two hits? That's it! Just two, teeny-tiny hits. How do you think today's game would go? Not so good, right? Now check the score above - yup, sometimes two hits is plenty.

Honestly, the explanation is not all that complicated here. Hamu starter Urano – a rookie 2nd round draft pick making his first career appearance – had a rather lovely day, looking at his stat line. Who woudn’t want 6 IP, 7 Ks, and only one hit in his first ever start?

You see where I’m going here, don’t you?

Yup, in the first inning Urano walked T OGINO, Imae, and Kakunaka wrapped around getting Nemoto and Iguchi to swing at strike three. That brought up AJA (getting the start at first) – and a wild pitch to make it 1-0. Aja went down swinging as well soon after – that’s a no hit, 3 walk, 3 swinging strikeout with a wild pitch debut inning. Kinda amazing, honestly.

One Single Hit
The one hit? Iguchi went BOOM on a fastball down the middle with two outs in the third – a huge smash into the left field stands, and a 2-0 Lotte lead.

For a while it looked that that’d be all The Baby-Faced Killer would need. After all, he retired 9 in a row after Yoh Daikan got on via Daichi throwing error to lead off the first. But no, he got himself into quite a pickle in the 4th – 4 singles including an RBI smack past a diving Imae made it a 2-1 game. In the fifth, he gave up another pair of singles but held on to prevent any more runs from scoring, but in the 6th the Hamu attack would break through again thanks to a single then a double in the right center gap by catcher Ono. Yuki finished out the inning without further damage (recording a quality start in the process), but it was now a 2-2 tie.

The Second Hit
It was pretty clear that Lotte bats weren’t going to do much more vs Urano, so he had to go. RIGHT ON CUE he went in the top of the 7th, replaced by Miyanishi. The veteran took a look at the scoreboard and said “My goodness! These chaps haven’t had a hit in a while!” so he obligingly coughed up a double to Kakunaka. Aja followed with a big bomb to deep right to advance Kakunaka, and Daichi brought him in with yet another sac fly. That’s it, folks – the lead was again in the possession of the Men of Lotte – it was a 3-2 game.

I say “That’s it” because yet again the bullpen was GREAT. First, rookie Shoei Yoshihara – a hitless frame (he would get the win). Then Carlos Rosa – the same, with a pair of Ks to boot. Then newly minted closer Nishino – a perfect 9th, puntcuated by getting dangerous Yoh swinging to end it.

Lots of great plays in this one – the heroes were Daichi, Yoshihara, and Nishino. Game three is on Sunday – how great would a sweep be, especially with rookie Ishikawa on the hill?

By Steve Novosel Could Our Marines do any better than yesterday's ultra-efficient win? Was it possible to put an even more entertaining game on the field? Why yes, yes it was, as rookie 1st round draft pick Ayumu Ishikawa was electric on the hill, and the Lotte bats put on a fireworks show to beat Hamu 7-1 and sweep the series. How's that for fighting back?

Let’s talk a bit about the Hamu attack. In the first inning, leadoff batter Yoh drew a four-pitch walk, and after a ridiculously pointless bunt, Shohei Otani poked a ball up the middle that brought in Yoh and made the score a quick 1-0 Fighters.

Completely it? No, Koyano blooped a single in the 5th, Kondoh drew a walk in the 8th, and with two outs in the 9th Otani managed a second hit. But THAT’S it. Super rookie Ishikawa, in just his second career start, posted this line:

Wow. And I really need to mention that this was with a 45 minute delay after the 5th inning due to rain – Ishikawa stepped right to the hill again and kept the Hamu bats almost completely quiet. It’s the first complete game for a Lotte pitcher since Furuya’s near no-no in June last year.

At The Plate
That fantastic pitching does no good without a bit of offense to match. I’ve already mentioned the run for Hamu in the first, how would Our Marines answer?

I regret to tell you that the QVC Crew could only squeak out six hits in this game. Worrying, especially after the only two hits on Saturday, right? Here’s the complete list of the hits:

1st inning: Daichi – crushes a 1-2 fastball over the right field fence for his first homer of the year. 1-1 tie.

2nd inning: Kiyota – pastes a 1-0 slider into the left field stands, basically the same spot he hit one his previous at-bat on Friday. 2-1 Lotte.

4th inning: Kiyota – whomps a 1-0 fastball into the left field stands, basically the same spot he hit one his previous TWO at-bats. Seriously, he almost hit the same family both times this game. Two gents on the sacs, that’s a 5-1 Lotte lead.

7th inning: Iguchi – whacks a 0-1 slider up and over the left field fence, down the breezway presumably rolling to rest at the bottom of the stairs where it gave thanks for the priviledge of participating in such a fine at-bat. 6-1 Lotte.

7th inning: Kiyota – AGAIN??? Nah, not a homer, just an RBI double down the left field line – that’s where we get our 7-1 Lotte final.

For the record, that’s 6 hits: 4 homers, a double, and a single. I’d say that’s efficient!

In the series intro I mentioned that it’s time for 139 wins in row. The first three are out of the way – how about the next 136? Let’s find out on Tuesday in Osaka.