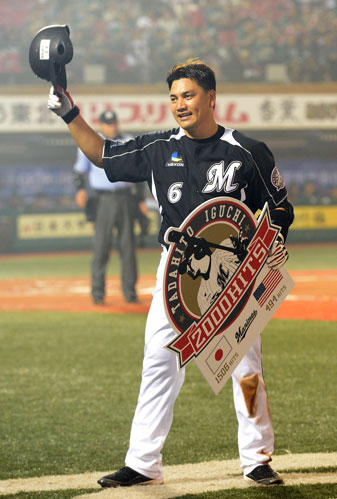 Things were looking good for Our Marines heading into the 9th inning on Friday night with a 2-1 lead. Greisinger pitched 7 innings of 1-run ball, putting himself in position for the win over Rakuten’s ace, the 13-0 Masahiro Tanaka. Lotte had the 2-1 lead thanks to Iguchi’s 2000th career MLB/NPB hit, a solo home run in the 6th. Most importantly, we were about to pull ourselves within one game of the first place Eagles.

Then, the Pacific League saves leader (as well as PL appearances leader) Masuda came in to close the game for us in the 9th. Masuda’s last earned run came on July 9th, getting 3 saves in 5 games/5 IP since the last time he was charged with a run. Tonight though, he looked about as awful as a pitcher could possibly look. Rakuten’s Ginji Akaminai led off with a perfectly placed bloop double down the left field line to get things going. Masuda then hit the next batter, struck out the next, but walked the next two batters walking in the tying run in the process. A Motohiro Shima sayanora hit to left-center finished off Chiba, as Rakuten walked off with a 3-2 win. Tanaka avoided his first loss of the season, going the distance on 90 pitches to improve to 14-0.

Ready for Some Good News?

Despite the loss, there were some positives to be taken from tonight. Seth Greisinger looked great in his 5th start of the year. After going 7 shut-out inning in his last start, he lasted another solid 7 tonight surrendering only one earned run on a solo HR in the 2nd. Seth struck out 4, walked 1, and scattered 6 hits on 112 pitches thrown. At the plate, Daichi Suzuki hit his 4th home run of the year giving Lotte an early 1-0 lead in the second.

Top honors tonight go to Tadahito Iguchi. In the 6th inning, he hit a solo home run to left (19th of the year) to give Chiba a 2-1 lead. The home run just happened to be Iguchi’s 2000th career hit in the MLB and NPB combined. Iguchi joined the likes of Ichiro and Hideki Matsui, becoming the fifth Japanese player in baseball history to accomplish accomplish the feat. My hat goes off to Iguchi.

4 thoughts on “The One That Got Away”