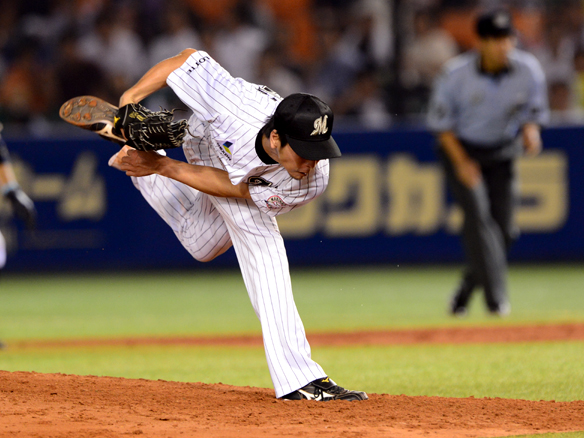 It’s been a rough month in Lotteland – a terrible, loss-filled disaster of a July. On Wednesday night Our Marines, behind steady pitching and strong veteran leadership, broke a 5 game losing streak and ended July on a stirring note via a strong 6-1 victory over Nippon Ham at QVC.

The End of a Disastrous Month
Tuesday’s game was notable for the following reasons: A T OGINO modasho in the leadoff spot and a total train wreck of a pitching performance by, well, basically everyone. Nobody had a good game. By the end of the night it felt like nobody had a good game in weeks (which, honestly, isn’t far from fact). Ohtani, Fujioka, Matsunaga – all got beat up. The bats couldn’t deliver. We got out-managed. It was everything that happened in Sendai last weekend all over again. With the 9-5 loss to the Fighters, Chiba dropped to 6 games back of first place Rakuten (remember we had a LEAD on Rakuten when July began!) and a game back of (GRRR) Seibu for second. Not good.

But it’s in the past. It doesn’t need to be discussed further than that.

And On Into August
Lotte needed a boost to get the team back to winning ways for the start of the last two months of the season, and it came in a big way from our most unlikely hero, Furuya1. Anybody who could predict before the season that the two most compelling and reliable pitchers in Chiba in 2013 would be Nishino and Furuya – well, let me give you my phone number so you we can meet up and you can choose my lottery numbers. All Furuya has done in the past month+ is earn a 4-1 record, a nearly 4/1 K/BB ratio, and basically be the only starter outside of Nishino that could be relied upon.

1I said this on Twitter, but I am most amazed at how quickly we’ve gone from “Eh??? Furuya’s starting? Really???” to “Alright! Furuya’s starting tonight!” Who knows if he keeps it up, but an unflappable lefty with good control is going to get a whole lot of chances.

Wednesday’s start was the best for Furuya since his near no-no at Kyocera Dome. Furuya was basically unhittable for 8 innings, only giving up three hits on the evening (vs 5 Ks) and no runs, one of which probably should have been an out as well. Only a fairly high pitch count at the end of the 8th kept him from his second complete game shutout of the season. In fact, Furuya’s 8 IP was the ONLY TIME IN JULY that a Lotte starter went past the 7th inning – no wonder Chiba ended up with only a 6-12-1 July record.


Credit where credit is due – there’s really four other players whose contributions to this game helped the team to victory. First is Satozaki – he started his first game in a month (due to his rib injury) and his calm pitch calling surely kept Furuya level. Next is T OGINO – not so much for his bat (he was 1-4 with a walk and a run scored) but two great plays in the field. For the first, the left fielder gunned down Ono at the plate for the third out of the third inning, and for the second, Ogino made a spectacular catch in the field wing seats in the 9th.

At the plate, all you need to know is that the #3 and #4 hitters – team leaders Iguchi and Imae – put on a hell of a show. Iguchi’s 2-3 with a pair of doubles and 3 RBIs matched with Imae’s 3-4 with a double and 3 more RBIs provided all the run scoring needed.

The win plus the Rakuten-Seibu tie moves Lotte to 1/2 game back from second and 5 1/2 back from first. Our Marines need to see more pitchers step up like Furuya (+ Nishino and Greisinger, who’s also warming up now) for these last 55 games of the season. Lotte faces Nippon Ham again on Thursday, with the Baby-Faced Killer up against young Nakamura.

4 thoughts on “Struggle and Redemption”