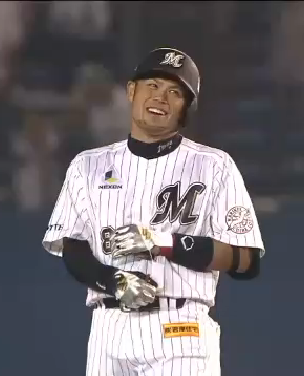 Our Marines fell 5-3 to the Nippon-Ham Fighters in the rubber match of a 3 game set.  As the line score shows, the teams combined for 8 runs in the first 3 innings, only to combined for 5 hits and 0 runs for the remaining 6 innings.  Starting pitcher Fujioka lasted only 3 innings, shouldering responsibility for all 5 of the Fighters runs on the evening.

Starting pitching depth looms over the Marines as the biggest question mark heading into the dog days of summer.  Let us not forget, last year’s Lotte club was also in first place at this point in the season.  A lack of pitching depth is what doomed us to finish in 5th place.

During an inter-league stretch that consisted of only 4-5 games a week, Itoh-Kantoku could rely mostly on a 4-man rotation.  For the rest of the year though, Itoh has 6 starting pitcher slots that need to be filled.  Tonight’s starter Fujioka settled in nicely to a role in the bullpen during inter-league play, riding an 8 2/3 inning scoreless streak heading into tonight’s game.  Though tonight, he did not adapt well back into a starter’s shoes.

Fujioka’s final line tonight was: 3IP, 5H, 2HR, 2K, 2BB, 1HBP, 5ER.  The first home run came way of a deep 2-run shot to left-center by Sho Nakata in the 1st inning.  Michel Abreu blasted an even deeper ball to the back of the left-center field stands for a solo-shot in the 3rd.  Fujioka’s high point of the night occurred while facing the top of the Fighters’ lineup, he escaped a bases-loaded 1-out 2nd inning jam by surrendering only one run.

A 3-run bottom of the 3rd for Lotte breathed new life into tonight’s game.  Little did we know at the time, this would be the last of all run scoring for the night.  T.Ogino got the Marines on the board first.  His high fly ball to left with 1 out somehow just carried over the fence for a 2-run dinger, knocking in Daichi Suzuki who reached earlier on a HBP.  It was suddenly only 5-2 Nippon-Ham thanks to Ogino’s HR.  Nemoto kept things going with a sinking drive to center field.  Center Fielder Yoh couldn’t squeeze the ball into his glove amidst a sliding attempt, and Nemo reached second with a double.  After a Kakunaka fly out, the next batter Iguchi hit a routine grounder right at the third baseman Koyano.  Koyano booted the ball, and Iguchi would reach base safely on the error.

Next, Imae came to the plate with 2 out and runners on the corners.  SMASH! A high hit ball to left…WAY BACK, WAY BACK….And off the top of the wall!  Nemo came in to score to cut the Fighters’ lead to 5-3.  Imae just missed a go-ahead 3 run home run.  The next batter Satozaki ended the inning by lining out to second base.  At the time, Imae’s near miss seemed like a bad break for sure.  But with 8 runs scored in the first 3 innings, the feeling was that there would be plenty more chances at the plate for both teams…

…Ya, that didn’t happen.  Lotte would go on to get only 2 more hits the rest of the night.  The Fighters narrowly edged them out with 3 hits of their own.  Once again, our bullpen did an exemplary job in long relief to keep us in a game.  Tonight unfortunately, it was all for the sake of preserving a save situation for the Fighters. Ito (3IP), Nakagoh (1 2/3 IP), Hattori (1/3 IP), and Matsunaga (1IP) combined for 6 innings of scoreless relief.

Our Mairnes did make it interesting, bringing the potential tying run to the plate in the 9th after an Ohmatsu 1-out single.  But the speedy pinch runner Ishimine would not advance past 1st, as Daichi Suzuki and pinch hitter Fukuura flied out and struck out respectively for the 2nd and 3rd outs.

The Fighters gain a game on us, and the rest of the PL picks up a half-a-game as a result of the loss. Our first place lead is now 1.5 games over SoftBank, 2 games over Rakuten.

7 thoughts on “Start Me Up”