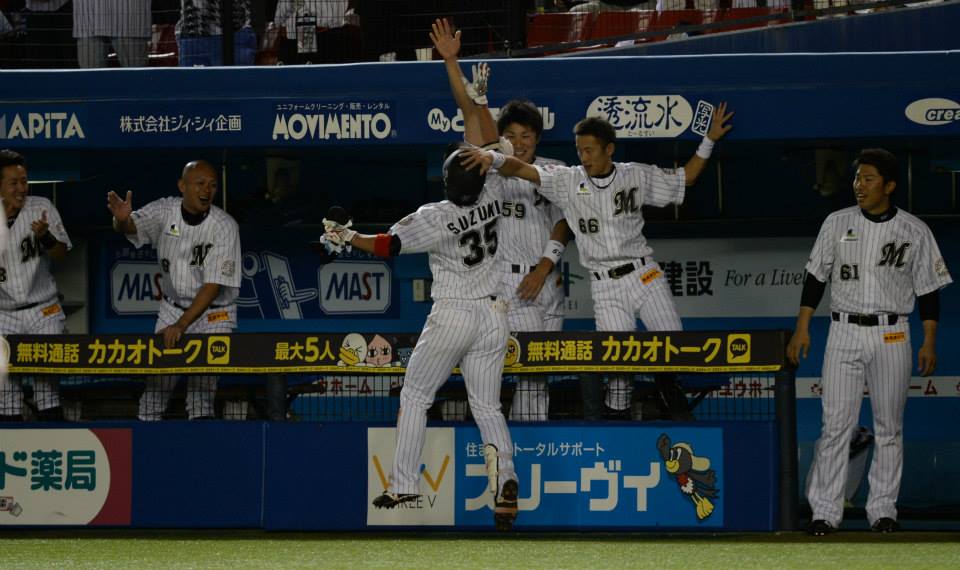 The Marines were able to contain a late game awakening by the Giants bats to preserve a win for starting pitcher Yuki Karakawa.   With 4 runs coming in the form of a pair of 2-run home runs by Iguchi and Daichi Suzuki, the Marines defeated the Yomiuri Giants 4-3. The Marines and Giants went into the game tied with the best records in the NPB.  Now, Lotte has sole possession of that honor. The win also guarantees at least a season split with Giants, as well as maintaining our position of 1/2 game out of the inter-league title and 3 games atop the Pacific League.

It’s been an up and down year for tonight’s starter Karakawa, as he came into tonight’s game with a 2-3 record and a 4.08 ERA.  He was also fresh off a 7-run (5 earned) loss to the Hanshin Tigers.  Karakawa answered the call tonight against the Central League’s first place Yomiuri Giants.  Karakawa effectively shut down the Giants lineup through 6 innings, giving up just three hits and no runs.

Karakawa ran into some trouble in the 7th.  After surrendering a lead-off single to Abe and a HBP to Murata, the Giants were threating with 2 on and no out.  Kamei sent a high fly ball to right center for the first o….OH NO! Kiyota (CF) and Kakunaka (RF) oh so gently bump into each other.  However, the impact was just hard enough to force the ball out of Kiyota’s glove.  Thanks to the error, Giants now had the bases full, with no out.  Never fear though! Karakawa got the next batter Lopez to hit in to a broken bat 5-4-3 double play.  A run came across, but the Giants were still 3 runs behind.  Still, there was a runner on 3rd.  The pinch hitter Ishii sent rocket that was seemingly headed for right field.  But, Nemoto leapt and snagged the ball out of the air to end the inning (image above).  Fine Play!

The Marines scored 4 runs on 9 hits.  Lotte got on the board first thanks to an Iguchi home run.  In the first inning, he hit a line drive that just wrapped around the left field foul pole, knocking in Nemoto for a 2-run dinger (10th of the year).  Later in the 4th, Daichi Suzuki hit a towering fly toward the opposite foul pole.  Daichi’s ball also stayed on the fair side of the pole, knocking in Saburo for his own 2-run blast (2nd of the year).  Both Daichi and Iguchi are now leading the team, each hitting .318.

It was also a two-for-four night for outfielders T.Ogino and Kiyota.  Ogino hit two doubles, Kiyota a triple and a single.

Karakawa was pulled after giving up an RBI single to Chono to make the score 4-2 in the 8th inning.  Matsunaga came in, inheriting runners on 1st and 3rd with 1 out.  Matsunaga got Abe to pop-up left of the third base bag to Imae for the second out.  Murata followed with an RBI single to left to pull the score closer at 4-3.  With 2 outs and runners on first and second, Kamei grounded a 3-2 pitch to short. The inning was over, and Matsunaga held the potential win for Karakawa.  Karakawa was charged with both runs, his final pitching line reads: 7 1/3 IP, 117 Pitches, 7H, 2 ER (3R), 5K, 0BB.

Masuda came in for his NPB record tying 18th appearance of May.  After a 1-out hit by Ishii (came in as a PH in the 7th), Ino (came in as a PR in the 8th) sacrificed the runner over to second.  Leadoff hitter Sakamoto came to the plate with the tying run in scoring position and 2 out.  Masuda induced a fly to right for the final out.  That’s 17 saves for Masuda on the season, his 10th of May.  Game over!

The Giants and Marines have their final battle of the year tomorrow afternoon.  It was nice to be in attendance tonight, but tomorrow’s ticket proved to be too difficult to obtain.  Thankfully, Lotte fans were not outnumber in their home park by Giants fans – the same may not be able to be said about the Hanshin series.  Hopefully, Giants fans didn’t buy up all the tickets for the Saturday afternoon game.

6 thoughts on “One Giant Leap”