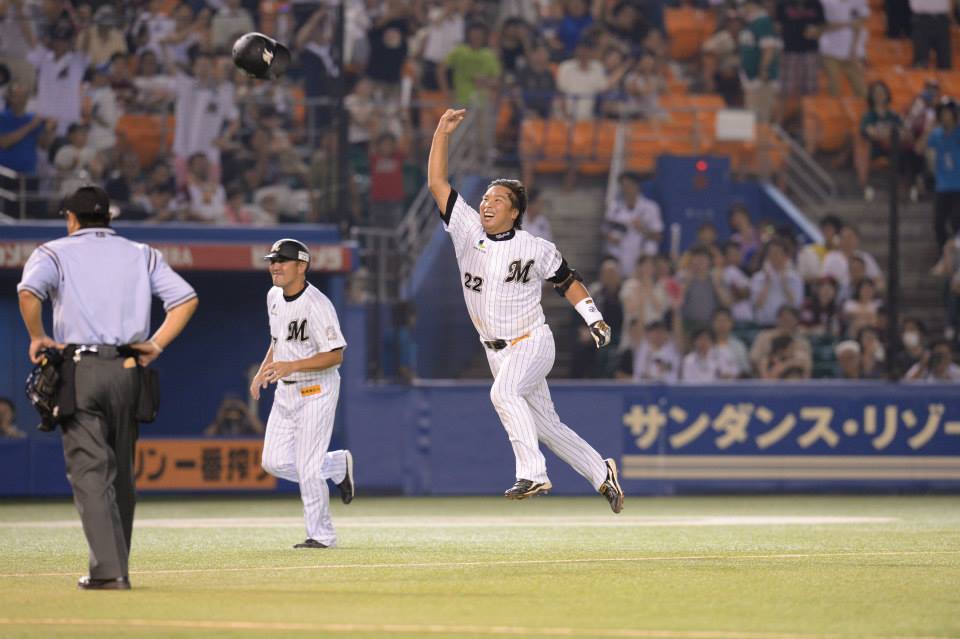 Things didn’t start pretty for Our Marines on Wednesday night. The first place Rakuten Eagles started the game by putting a crooked number 4 on the scoreboard in the first inning off starter Seth Greisinger. Seth managed to settle down though, going 5 innings while only giving up one additional run. This kept Chiba within striking distance, allowing for a comeback win in one of the most exciting game thus far in 2013. Veteran catcher Satozaki hit a sayonara solo home run in the 11th, giving Lotte a 6-5 11th inning walk off win!

Chiba faced a four run deficit on two separate occasions tonight, down 4-0 after just half an inning, and 5-1 after 4. The first Chiba run came on a Kakunaka single in the first, knocking in t.ogino (or as Steve would say T. OGINO, had a 3-for-5 modasho today). Lotte’s second run came on a Craig Brazell 5th inning solo shot (7 HR in 26 G) putting us back within 3 runs at 5-2. Chiba wasn’t finished scoring in the 5th though, as the next batter Daichi walked followed by Ohmastu knocking him in with an RBI double. Ohmatsu reached 3rd safely after the throw to the plate, allowing the next batter Satozaki to send him home on an sac fly to deep right-center. Rakuten starter Mima would be chased from the game after a 2-out Ogino single, and the 5th inning ended with the score 5-4 Eagles leading.

Lotte had a two out bases loaded chance in the 6th, thanks to three walks, but Satozaki stuck out swinging to end the threat. The score remained 5-4 until the 8th, when Kakunaka and Imae lead off with a walk and a base hit respectively. Kakunaka went first to third on Imae’s single to right, called safe only because 3B Casey McGehee dropped the ball while applying the tag at third after a strong throw from right. Next up, Craig Brazell delivered again, tying the game at 5-5 on a base hit through the right side of the infield. After a sac bunt by Daichi and a walk of the intentional variety to Fukuura, Satozaki came up with the bases loaded and 1 out. But neither he, nor PH Hisao Heiuchi could deliver, as both struck out looking in succession.

The game continued into the 11th inning, thanks to 6 scoreless innings of relief by Fujioka (1 2/3 IP), Ueno (1 IP), Hattori (1/3 IP), Uchi (1 IP), Masuda (1 IP), Matsunaga (1 IP and the W). Finally Satozaki put an end to the madness, leading off the bottom of the 11th by taking an 0-1 pitch to the opposite field for a solo walk off homerun! Sato-chan rounded the bases grinning ear-to-ear, and was mobbed by his teammates waiting for him at home celebrating the sayonara win.

The Marines look to complete the sweep of the Eagles tomorrow night. Rakuten came into the series with a 6.5 game lead over Lotte in the PL. Now, our boys are only 4.5 back, and 3 up on Seibu and Soft Bank in the two spot. We have now won 3 in a row, and are 8-2 in our last 10. Shunsuke Watanabe was called up from Ni-gun to start tomorrow night versus Rakuten’s Norimoto.

Satozaki Photo Gallery, because why not?