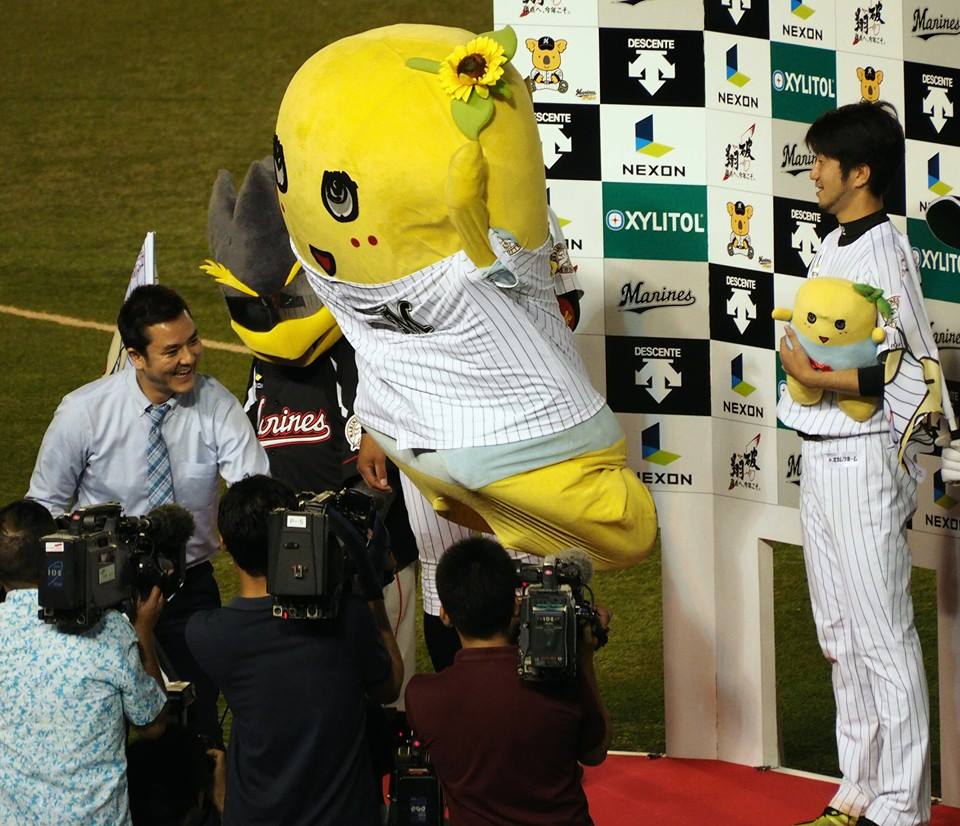 Despite the series loss, there’s a lot positive to take away from the Rakuten series. The team has put up 3 or more runs for 7 straight games including the pair of 7 run showings in the first two games. Katoh has been crazy good at the plate ever since being called back up, and some of the pitching was quite solid.

None of that can take away from the difficult truth that this team hasn’t won a series since the beginning of interleague play. At home vs Daiei in the last series before the All Star break – I can’t think of a better time to end that horrible streak.

By Steve Novosel As balls rattled off the outfield fences (and Lotte batters) Our Marines returned to Chiba and delivered a tense, exciting win off the strong arm of rookie sensation Ishikawa and the timely hitting of budding star Katoh.

Beyond the fact that Our Marines won this game, which is a Good Thing even in a vacuum – it’s great to get a win in this game in particular due to:

1) The very strong start by Ishikawa – 7 IP, 4 hits, 0 walks, 0 ER and 3 Ks on 89 pitches. Goemon’s got the best ERA on the team now at 2.88 and the 6th best in the PL. He SHOULD be an all-star but in a world filled with violence and injustice can one truly expect correct decisions from manager’s picks?

2) Katoh. Shohei. Man or machine – we still haven’t settled that debate! Young Katoh only had one hit in this one but it was the game winner. He’s only received 1/3 the at bats of team leader Daichi this year, but doesn’t it seem like he’s been involved in so many key plays? I wonder what would happen should he actually get the playing time his skill merits?

3) Wild pitches. Hawks starter Standridge was all over the place in the third inning, and he should have been tossed from the game well before he actually was. First he plunked leadoff batter Daichi in the hoo-hoo, then lost control of a fastball that hit Gori in the upper arm (a lucky thing – that wasn’t far from missing the upper arm and hitting Gori in the face). Two batters later, Braz wasn’t so lucky – another fastball caught him flush in the head. When I saw it live in the stadium I thought it looked really bad, though Braz did get up eventually under his own power. Unfortunately, Braz has been removed from the roster for the time being, though he seems to be OK.

4) Huff-n-Hustle. Hot, hot, hot! A walk and a pair of doubles, and he scored the game winning run? Yup.

5) The pen. Ishikawa had to leave suddenly at the start of the eighth due to a cramp in his throwing hand. That’s OK, though, as the team of Matsunaga, Ohtani, and Nishino had things covered – 2 IP of 1 hit, 2 K, 0 run relief work. Great recovery after the run fest in Sendai.

Losing this one with all those fine components would have been a real heartbreaker, but Our Marines did just enough to win and take game 1 of the series.

By Steve Novosel Fantastic pitching from 6 different Men of Lotte and a tremendous clutch hit off the bat of Chiba legend Fukuura - say what you will about tie games, but for my money, this was a win everywhere but the final score.

Getting the start this night was The Baby-Faced Killer, or should I call him The Mercurial Baby-Faced Killer? One should not forget that after returning from ni-gun and posting a true ace line on the road vs Daiei, Karakawa got blasted by a much, much weaker Seibu squad. This has been his season – no, his last two seasons. On Tuesday, though – actually pretty good!

Yuki got a bit unlucky in the first frame as Nakamura reached via Cochito bobble at short, and scored on an Uchikawa single. 1-0 Hawks after one. Chiba tied the ball game in the 4th via a sweet Iguchi double that brought in Imae.

Hawks scratched the lead back in the 5th on an Imamiya RBI infield hit. Cruz was game for the play – he got to a ball that few could, but his momentum didn’t allow him to put much on the throw and Imamiya reached safely at first, swift Honda scoring on the play. 2-1 Hawks.

That lead didn’t last long at all, though, as a most unlikely source of power – 5th or 6th string catcher Kawamoto hammered a pitch from Hawks started Iida into the left field stands – his first homer in 2 years, and one that tied the game at 2-2. Unfortunately Daiei is really good at generating runs – a Honda walk in the 7th + a sac bunt and a Nakamura single = 3-2 Hawks lead.

So it stayed through Yuki’s departure from the hill, plus 7th and 8th innings bereft of baserunners. The Hawks pen is the best that money can buy, stocked with great arms like Igarashi, Okajima, and Dennis Sarfate, so this is not totally surprising. But Our Marines were not done. 2 outs, 9th inning, Safarte throwing – Huff smashes a ball right to Safarte, but it’s off his arm and Huff hustles into first base SAAAFE. Cruz due up, Itoh decides it’s time for Chiba legend Fukuura to have a shot. Safarte uncorks a wild pitch and Huff moves to second. Itoh replaces Huff with speedster Okada – Fukuura lashes a 2-2 offering into left field, Okada rounds third and slides in SAAAAAAAFE! Tie game at the last possible moment! Kawamoto has a chance to win it but his dying liner is barely caught in RF to end the 9th.

You see the final score, you know there was no more scoring. In fact there were no more hits – after the departure of Karakawa the combination of Masuda, Nakaushiro, Katsuki, Nishino, and Ohtani allowed just one hit and 2 walks in 5 2/3 innings of work – amazing. Particularly amazing was Ohtani’s dominant 11th and 12th – 17 pitches, 2 Ks, no hope.

Chiba had a few strong chances – bases loaded on 3 walks in the 10th (ended with Ohmatsu K) and a pair of walks in the 12th. Interestingly enough, the bench was emptied completely in the attempt to win the game – Chiba ended with Tamura at 2B and Kanazawa at 1B! Tamura made a great play to save a hit, too – one worth of a full-time second baseman.

By Steve Novosel By any objective standard this was a poor excuse for a ballgame - extremely lopsided, over before a third of the game was complete. But I don't care, I am not an objective observer - I loved every second of this cathartic blowout win.

I can criticize exactly nothing about this game. 13 runs on 16 hits? Yup. Key hits by all-time Chiba heroes Imae and Fukuura? Indeed. Great contributions from newer players like Huff-n-Hustle, El Cochito, Shohei? Yes, yes, yes! And to cap all that off, the first complete game shutout of the year courtesy of once and forever New Lefty Ace Furuya!

It’s impossible to detail all the great hits by the Men of Lotte this evening. Furuya kicked things off with a 6 pitch first inning, and in the bottom of the inning Okada stroked the second pitch he saw for a single. From there, the beat down didn’t relent until Hawks starter Hoashi (undefeated on the season with a solid ERA) left the game 3 innings later. A Daichi walk, Imae single, and a Fukuura timely single later, the good guys held a 2-0 lead.

Furuya got into a bit of trouble in the 2nd after plunking Honda with two outs (and I am sure that HBP was totally not a well-disguised retaliation shot, no sir) but it wasn’t the sort of night for Daiei where they were going to be able to damage Our Marines.