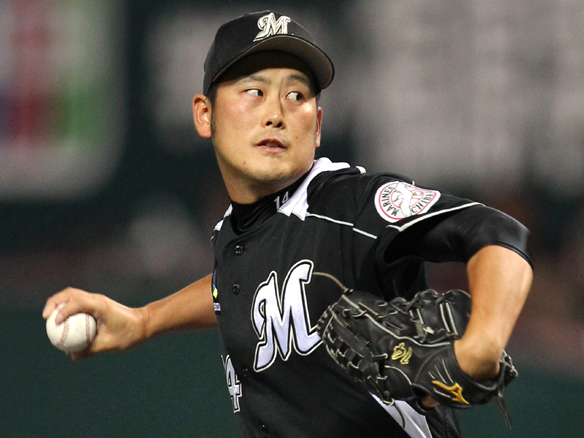 Note: We’re trying a new format where there is one post for the entire series, updated with the results for each game. Bear with us if it doesn’t work as well as we hope!

Preview
Yet another critical series for Our Marines, this one just made more critical by the failures in Sendai. Lotte comes in 5.5 back of first with just 33 games to go, but more importantly is just one game up on Daiei and 3.5 up on 4th place Seibu. This series is about as must-win as an August series can be.

My guess on the starters is Ohtani (whom I never would have guessed had he not been announced already), Karakawa, and either Fujioka or Ueno.

The Ohtani-as-effective-starter bandwagon is a small one. I’m not sure there is anyone outside the coaching staff who is on it, to be honest. If you’ve been reading this site for a long time you may know I used to be on that bandwagon as Ohtani gave us several very effective, if not on the edge of dominant, starts back in 2011 before he fortunes fell late in the year (as did the team’s record). Last year he got a couple of chances to start and didn’t do all that well but was pretty decent as a middle reliever.

This year has been an unmitigated disaster – his 7.99 ERA coming into this game is the second lowest it’s been all year (his lowest was not exactly low – 7.17). As a starter he’s only gone 5 innings one time, when he went exactly 5 on 11 August vs Hamu. And his last start was a well-documented debacle, the 0 1/3 IP, 3 BB and a grand slam train wreck vs Orix 10 days ago.

I dwell on all of this because it makes this game so surprising – against Daiei in Fukuoka, with Our Marines desperately needing a win, Ohtani pitched his ass off. A double each in the first and second, a walk in the first, and a HBP in the 3rd – that’s the sum total of the Hawks batters that Ohtani allowed on base. Seriously, that’s it! 6 2/3 IP, 22 batters faced (2 over the minimum), 5 Ks, no runs at all, barely any runners, and no chance for Hawks bats.

Clearly, the coaching staff knows way more about the players than you or I. Who would have thought?

Even better, the pen was back to its wonderful self. Hattori, Ueno, and Uchi finished out the final 2 1/3 innings of the game – not a single runner allowed on base. That’s the last 20 batters of the game retired by Chiba arms. It doesn’t get any better than that, folks.

And on offense? Well, the Daiei pen was pretty strong as well, getting the last 16 Lotte batters out, but the difference is Our Marines got to Hawks starter Arakaki in a big way in the second inning, and could have had even more in the third. In the second, Chiba sent 10 men to the plate, 6 of them recorded hits plating 5 – all of it with two outs. The crucial hits came from Satozaki with a 2-run single to center to score Imae (2-4) and T OGINO (2-4 on the night) for the first runs of the game. Okada doubled next from the leadoff spot to score Daichi (1-3 with an RBI double), then Nemoto singled as well to score both Satozki and Okada. That big 5-run inning gave Ohtani a huge cushion, and unlike in the bad games in Sendai this past weekend the pitching was more than up to the challenge of protecting those runs.

In the third Our Marines scored another run thanks to the RBI double from Daichi, but got bit unlucky in scoring anymore as with the bases loaded and only one out, Okada hit a hard grounder right to Matsuda at third, who easily stepped on the bag and fired to first for the inning-ending 5-3 double play.

Rakuten lost as well so Lotte is back to 4.5 behind the Eagles for first, and is 2 games up on Daiei in second. Just think – if we had managed to hold the 4 run leads on Saturday and Sunday Lotte would be just 0.5 games out of first. No matter – keep winning and it will all sort itself out.

Another great win for Our Marines, though I must admit that I am a bit disappointed in how this one ended up. Not the result, of course! That was a tense 3-2 Lotte win. I’m just disappointed that The Baby-Faced Killer couldn’t go the whole way.

Karakawa’s opponent was the young star Takeda, who utterly dominated Lotte bats last summer en route to his 8-1 record in his rookie campaign. He’s been pretty good against us this year as well, but with Wednesday’s win Chiba has now won 3 of the 5 games he’s started.

After a very strong first trip through the lineup by Takeda Our Marines got a solid chance going in the fourth. Nemoto led off with a single, and Iguchi grounded into a very, very close play at first (one that Daiei fielders didn’t agree with at all, but I couldn’t tell either live or on replay if he was out or not) to avoid a DP. Kakunaka drew a walk after Imae lined out to Matsuda, and Braz brought in Iguchi with a timely single. Right after T OGINO grounded through the left side to score Kakunaka – 2-0 good guys!

Meanwhile, Yuki was cruising. Yes, he gave up a pair of singles in the third, but they were of the cheap and lucky variety (which still count, of course, but don’t say anything about the quality of the pitching.) The second was up the middle and right off his glove to put runners on first and second with two outs, but Uchikawa grounded to Imae to end it.

After that? 10 in a row for the Killer. One of the reasons I love watching Karakawa is when he’s in a groove he’s just so cool and so smooth. We haven’t seen much of that Karakawa this year but there he was in the middle innings. If you asked me after 6 if I thought he would go the whole way I would have put money on yes. 69 pitches and just the two infield hits – great.

Imae and Kakunaka singles in the 6th put Takeda in a real tight spot, so Akiyama-kantoku went to the pen for diminutive lefty Morifuku. who mauled Braz, T OGINO, and Daichi to end the Lotte chance. But in the Lotte lucky 7 with Morifuku back on the hill for his second inning – big Satozaki arch to lead off the frame. 3-0 Chiba and we’re feeling great.

In the Daiei 7th, though, Yuki’s luck starts to turn. After a quick K of Matsuda Hasegawa gets on with a super lucky roller down the third line. Normally that sort of ball would have been a foul, but Imae could do nothing but watch it trickle to him. Yuki’s not happy – Yanagita crushes the next pitch off the right field wall for a double. Runners on second and third, one out, Egawa up. The Baby Faced Killer lives up to his nick but getting Egawa swinging on a high fastball. He’s fired up, punching the air like he’s Tanaka (which is something I’ve never seen from him!) – the end of the inning is in reach. Honda’s up. He’s hacking, swinging at all sorts of junk. Karakawa tosses a filthy pitch that was definitely a ball, that Honda had no business swinging at but he does – foul. Next pitch, another one off the plate, Honda’s hacking again – and hitting. Two runs in, it’s 3-2 Lotte.

Super unlucky. On a different day Karakawa could have had a one hitter going but on this night, he’s gone. Hattori closes out the 7th to preserve the lead.

It’s another bullpen battle – the Hawks pen shuts down Our Marines over the last two innings so it’s down to the Lotte pen to hold that slim margin. Carlos Rosa in for the 8th, and he’s looking super dodgy. A pair of hits in the middle of the lineup brings up Yanagita with two outs – Itoh’s going to Ledezma. Using extreme Wil power, Ledezma gets a huge K to end the threat.

Masuda in to close it – he’s a bit nibbly to Egawa but gets him to pop out, then easily disposes of Honda and Yamazaki to complete the perfect frame and seal the 3-2 win. That puts Our Marines three clear of the Hawks in second and maintains the 4.5 deficit behind Rakuten. Not bad.

Sadly Our Marines couldn’t finish the sweep as Nishino got rocked for 5 runs in less than 5 IP, and Chiba bats could not make up the deficit.

The key play in this one came in the 4th. Nishino walked Yanagita and Hasegawa, the first two batters of the inning. A sac bunt moved the runners to second and third to bring up the extremely light-hitting Akashi (fresh up from ni-gun for the first time in 3.5 months), who smashed a Nishino fastball left over the middle of the plate into the right stands. It was 1-1 at the time, that made it 4-1 and Daiei would cruise the rest of the way.

To be honest, I am perplexed as to why Kanazawa got the start at catcher over Satozaki or Emura (who is in ni-gun). Kanazawa has handled the pitchers the worst of any Lotte catcher this year – they have an ERA north of 4 when he is behind the plate, Satozaki and Emura are almost a run better. Itoh moves in mysterious ways, I must say.

Lotte had their chances late in the game – 8 baserunners in the last 4 innings, including 6 singles – but no timely hits were to be found. It happens. The final score? 5-1.

Series Summary and Next Series Preview
Unfortunately Rakuten won on Thursday, going 2-1 in their series in Kansai, so the deficit for first place in the PL is the same as it was at the start of the series – 5.5 games back. The series win guaranteed that Lotte would win every series in August except one, but boy was that one a doozy.

The Boys from Chiba are back home for a weekend set with Hamu – the second and final Beer Stadium on Friday to get it started. You won’t believe who is starting on Friday – Matsunaga. I, along with everyone else, have no idea what to expect.