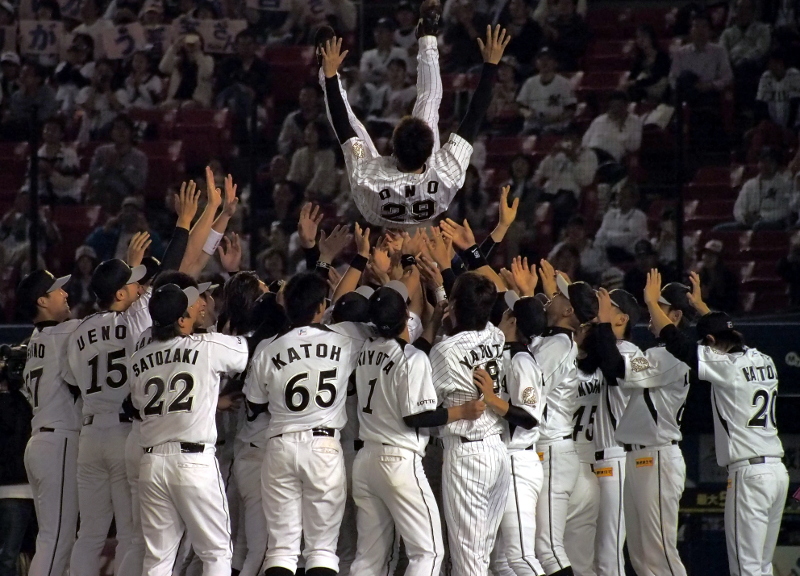 Series Preview: Marines fans, you saw that last news post. Our Marines have made it to the postseason for the first time in three years. If you are new to being a Marines fan, it may be hard to get why this is such a big deal. Here’s why: In the last 39 years since the championship when the team was still the Lotte Orions and played in Sendai, this team has played postseason baseball just 4 times, this the first time since 2010. It’s huge.

The hardest part is done; we have a chance at a title. But the guys need to bring it back home. We need a few more wins – Seibu is lurking, they want those first Climax Series games at their home, not ours. That’s too bad – they’re coming to Chiba, and this weekend is when we can clinch that.

New Lefty Ace Furuya gets the ball first. We may even see an appearance from Old Lefty Ace Naruse soon.

By Steve Novosel Did you enjoy the 20 baserunners recorded by Lotte on Thursday? Yes? Great, you're in luck! Our Marines did it again on a wet day in Makuhari, plating 9 of those gentlemen to knock off the visiting Buffaloes of Orix 9-4. With the win Chiba moves one step closer to securing a home series against Seibu next weekend.

Seibu? Yup, it’s confirmed – the matchup for the Climax Series First Stage will definitely be Our Marines versus the hated, hated Lions of Seibu. This was extremely likely to happen after Daiei’s untimely losing streak this last week, but it was sealed with a Lions win in Sendai.

Pitching in the Rain
I’ve already told you Lotte’s offense was doing things, how about the pitching? The conditions were honestly pretty bad – a constant, cold, misty rain fell all afternoon and all the pitchers had problems with control. New Lefty Ace Furuya was no exception, as he issued 6 walks and was in trouble in all of his 5 innings1. All of the 3 runs hung on Furuya came in the Orix 4th inning, the first via Itoh solo HR to left, and the other two via a two-out liner to right that was just beyond the reach of Iguchi at first.

1Am I worried about Furuya’s shaky performance? Not at all. The conditions were poor and he was being caught by our third string catcher. Were this a dry, warm night with Satozaki behind the plate, I’d be worried. But not now.

Furuya did just enough to get the win tonight, going the minimum distance and with tons of run support. It’s the 9th win on the year for Furuya – he hasn’t lost a decision since July 4 – it’s easy to see how he’d likely have 15+ wins by now if he had pitched the first part of the year.

The rest of the pitching staff was superb with the exception of an extremely meaningless solo shot by Baldiris off Minami with 2 outs in the 9th and Lotte up by 6. Ueno, Uchi, Rosa, and Minami combined for just that one run and two hits total over the final 4 frames – good stuff2.

2As we’ve said all year, as the bullpen goes, so goes the team. I think this is doubly so now when every game is meaningful.

Everyone’s a Winner!
Everyone’s a contributor, at least. Every bat in the starting lineup contributed to the win, and everybody but Kanazawa figured in the scoring, either by driving in or scoring a run. In fact, everyone but Kanazawa and Kiyota was on base at least twice. Impressive.

The hero of the game was Imae, and his heroship was well-deserved – see his 3-5, 4 RBI stat line for proof positive. Gori drove in Nemoto for the first run of the game with a one out single with two on in the bottom of the first – 1-0 Lotte after one.

Okada drove in the second run in the second inning with a perfectly executed 2-out squeeze to score Ishimine. Okada’s the perfect guy to throw a squeeze out there as he frequently tries to bunt for a hit anyway. 2-0 Lotte after 2.

The third is where it got fun – Braz drew a leadoff walk, and Kiyota smashed a low liner to the right-center gap between two fielders playing in. Kiyota’s got wheels, we know he’s going to rip one off. Braz – we love Braz at We Love Marines – he’s not much of a speed demon, right? But he busted ass around the bases to score all the way from first, and Kiyota ended up with a triple. Ishimine up next, and he’s singling in Kiyota! That chased Orix starter Dickson, in came Matsuba. The result? No change – walks to Nemoto and Okada pushed in another run, the third of the inning, giving Our Marines a 5-0 lead after 3.

The Buffs got it closer with the aforementioned 3-run 4th inning, but Our Hero Imae turned it into a bit of a laugher in the Lucky 7th with a pummelized jack to deep left, scoring Iguchi and getting the score back to a healthy 7-3 Lotte lead.

RBI singles in the 8th by Iguchi and (there he is again!) Imae to score Nemoto and Okada got Chiba to the 9 run total. Damn nice production.

The Lotte magic number to seal second place is down to two with 3 Lotte and 2 Seibu games left on the schedule. Obviously the easiest way to get there is a Lotte win tomorrow coupled with a Seibu loss in Sapporo, so let’s do that, shall we?

By Steve Novosel You know that thing I mentioned we wanted to happen today? Right above this part of the post? The thing about Our Marines winning and Seibu losing? Yeah, the exact opposite happened, with Seibu coming back to win in Sapporo and Chiba dropping a heartbreaker at home to Orix by a 3-1 margin. It's bad, but it clarifies things immensely.

Clarity, huh? That’s what we get to take away from this? Yes. Now we know what Our Marines need to do if they’re going to host the Climax Series First Stage next week – on Tuesday, beat Seibu. It’s the last game of the year. Win it, you get to play at home. As I said, it’s simple.

Not the Best of Games
This game was also quite simple – failure to capitalize on a cornucopia of chances versus arguably the second best pitcher in the PL doomed Lotte on Sunday. The one run we scored was the first out of the game for us – Nemoto, Okada, and Iguchi all got on in order in the first inning, and with no outs Imae lofted a sac fly to score Nemoto. That’s it.

There were still two men on and one out in that inning, but no more scoring. Runners in the second and third innings – nothing. Runners on the corners with one out, bases loaded with two in the fourth – nada. Two men on, no out in the fifth – zip. Despite 7 hits and 4 walks off a very, very tough pitcher, only that single run was plated. Tough to win many games like that.

Honestly it looked like Our Marines would get away with the failure to capitalize. The Baby-Faced Killer got the start and while his command was not up to snuff, the Orix bats couldn’t get any runs across either. In fact young Karakawa made it through 6 innings unscathed, this despite 5 walks and three hits – plenty of opportunities to score for the Buffaloes. But score they did not.

That changed in the 7th – out went Yuki, in came Ledezma, and then the comedy of errors began. First up, Itoh popped a fly that I thought was going nowhere, but just cleared the top of the fence for a homer. One batter, there goes the lead. It was not just Itoh’s second homer in as many days, it was his 4th CAREER homer. Egads. right after that came a Shimada single, a Hirano grounder moved him to second. Ledezma fought hard against the next batter, Adachi, but Kanazawa (there he is again!) dropped a foul tip that would have been strike three – Adachi ended up doubling in run two. That brought out Uchi to replace Ledezma – Uchi had a few control issues as well, and he bounced a ball in front of the plate that Kanazawa completely misplayed. It kicked away, Kanazawa took a long time to get to it and when he did he made a very bad throw. Adachi scored all the way from second on a wild pitch – that made it the final 3-1.

It’s was a fairly gruesome loss to be honest, but it’s not the end of the world3. We can right past wrongs at Seibu Dome on Tuesday, and then pretend this loss never happened.

3Or so I keep telling myself as I cry myself to sleep.

Saying Goodbye
What can’t be avoided, though, is that Sunday’s game was the last regular season home game of the year. Already. Sure, we could get up to 7 more playoff games at QVC but that’s it for 2013. Depressing.

We also bid a very sad farewell to a pair of long-term Marines players – Ono Shingo and Yabuta Yasuhiko. Their retirement ceremonies were very touching indeed – I’ll confess that my eyes were not entirely dry, especially as Ono struggled to make it through his speech. It was good to see them take the hill one last time, and fitting that they could feel the adulation of the Lotte faithful one last time.

I took a bunch of pictures during the game and the ceremony – I’ll let them tell the rest of the tale.