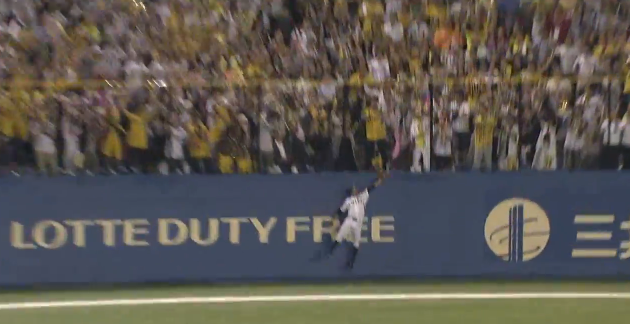 Eight hours and fifty-eight minutes.  After last night’s tie, that’s how much baseball was required for a victor to finally emerge in a Marines-Tigers game in 2013.  However, the result of this game didn’t take that long to become clear, as the Hanshin Tigers won 7-1.

Lotte only managed to score one run on 10 hits and 6 walks.  There was also a litany of hard hit balls to the outfield that didn’t fall for hits, especially with runners on base.  The Marines stranded 9 runners through the first 4 innings, and ended up with a total of 14 runners LOB.  As per usual, I could go through the list of missed opportunities.  But, spending almost 9 hours at the ballpark in 2 days makes me think getting some sleep is a better use of my time.

It was certainly a fun night to be a Hanshin Tigers fan.  Tonight’s hero, Matt Murton, went 4-5 and knocked in the first two RBI of the game.  Ryota Arai hit a bases clearing 3RBI double in the 3rd that put the Tigers up 5-0.  Arai was nearly robbed by T. Ogino on the play.  Backed up to the left field fence, Ogino leapt, but the ball just missed his glove and bounced upwards off the top of the left field padding.  Having spent time on the field at QVC robbing imaginary hits myself, I can tell you that a ball that hits the top of the padding is within reach.  It would have been an outstanding play for sure, but had the ball found Ogino’s glove, it could have been a different game.

Public enemy number one Nishioka had a 3 hit night for Hanshin.  The Tigers also got a serviceable outing out of starting pitcher Randy Messenger.  He threw a whopping 146 pitches through 6 and 2/3 innings.  As I mentioned earlier, Lotte had plenty of base runners.  But Messenger got the outs he needed to only give up one run.  That, and 7 runs in support, earned him the win.

Chiba-ken native Karakawa did not fare so well on the mound for Lotte.  The 4-run 3rd inning all but put the game away.  He did settle down nicely in the middle innings, but in the 7th inning he gave up 2 unearned runs (thanks to an Ogino dropped fly ball).  He was pulled with 2 out in the 7th, after 133 pitches thrown.  Karakawa’s final pitching line: 6 2/3 IP, 5ER (7R), 10H, 5K, 2BB.

With the ever boisterous Tigers fans in town, it was an exciting two nights at the stadium.  Looking forward to getting some revenge next month at Koshien Stadium.  It looks like Steve and I will be making the trip as well.

Up next is a pair of weekend games in Yokohama.  As we head into an off day Friday, Lotte is still 2 games up in first place of the Pacific League.  I’ll take it.

1 thought on “A Hurtin’ From Murton”